What do you think the iPhone 7 will be like?

What do you predict/want for features 2 years from now?

I predict and hope for:

Revolutionary camera with more megapixels and no noise reduction smearing.

I predict an iPhone 8 speculation thread when it launches.
J

Well, first a 6S with more RAM. Then, in 2 years from now, the 7. My guess is that Apple might move away from aluminum framework to something that rebounds after deformation. Like carbon fiber, polycarbonate, etc. Or a different metal.

Did you mean the 6s? The iPhone 7 will have a different form factor/design.

I'll bet the 6S will not have more RAM!
T

I don't think Apple will move from aluminum alloys. At least, not while Jony Ive is still around. I predict a somewhat radical change in the iPhone 7; thinner bezel and something to make the phone more comfortable in the hand. The G3, for example, is very nice to hold for a 5.5 inch phone.
J

Newtons Apple said:
I'll bet the 6S will not have more RAM!
Click to expand...

Not a good idea to bet on this as the 3GS gained more RAM over the 3G.
X

It will be boring.
A

It's getting to where how much more can you really do. I don't get as excited as I used too at iPhone launches.

iPhone7ate9 said:
What do you predict/want for features 2 years from now?

I predict and hope for:

Revolutionary camera with more megapixels and no noise reduction smearing. - Is that revolutionary?

4k video recording - could be, although it's more likely that apple will stick with 1080p and work on the quality

better battery life - will probably be the same

same form factor - the 6S will be the same, the 7 will be a bit modified I'd say

Answers in bold...
B

JonMPLS said:
Well, first a 6S with more RAM. Then, in 2 years from now, the 7. My guess is that Apple might move away from aluminum framework to something that rebounds after deformation. Like carbon fiber, polycarbonate, etc. Or a different metal.
Click to expand...

I think Apple goes quad-core in the new iPhone 7's. iPhone 6S sticks to dual core still but have 2GB of RAM

Battery life is gonna be even better in the 6S, and the 7 even better battery life. The move to 16nm FinFET and then 14nm manufacturing node will give big power efficiency gains

Apple is doomed.
No iPhone 7 coming.

Day and a half battery life with moderate use

The top and bottom bezels will be smaller. They might even remove the home button and let you press down on the bottom of the screen using the same technology in the Apple Watch.

I have no idea what the exterior case will look like but I would wager it's not going to be anything too dramatic from what we have now.

I have no idea what iOS will look like by then but I will bet Apple Pay will be expanded in iOS 9 to let you pay other people with your phone. So you could pay friends money or whatever. Software is really the only thing left that can make leaps from year to year. The hardware is pretty incremental now.

I think Apple has big plans for this phone and likely have been prepping it for a while.

I think that 2016 will be a huge year for Apple with redesigns as a whole. The long-rumored MacBook redesign might happen next year, and I think that the 7 will also see a pretty slick redesign after the 6s releases. I can see the 7 having no physical home button and a much smaller frame as they will have smaller bezels. It'll obviously have a better camera, NFC, all of those things the 6 has now.

I also feel that iOS 10 will be huge and starkly different as well. Probably will more past the icon grids with the rows.

A lot of this is just guessing, but it seems like natural evolution for Apple. They do usually fall behind on what a lot of smartphone features and popular trends are, but they get it right two or so years later.

JayLenochiniMac said:
Not a good idea to bet on this as the 3GS gained more RAM over the 3G.
Click to expand...

I feel quite safe.
N

JayLenochiniMac said:
Not a good idea to bet on this as the 3GS gained more RAM over the 3G.
Click to expand...

Epiphron said:
Then what about 5->5s
Click to expand... 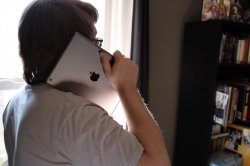 1080p yah true forgot it's only 720 right now. You wouldn't need a protruding front camera just use the one from the back of the 5s
C

iPhone7ate9 said:
I predict and hope for:

Revolutionary camera with more megapixels and no noise reduction smearing.

at least an 8 megapixel selfie/front facing camera
Click to expand...

More megapixels are useless in a device like this unless the lens is improved.

I highly doubt the tiny plastic lens can resolve much more than 8mp of detail, even in ideal lighting conditions. It's like a Holga camera. The limitation is not the film/sensor; it's the substandard lens.

They also cannot make the sensor larger unless they A) make the phone physically thicker, which they don't seem to want to do; B) tack on an even wider angle lens, making it borderline useless for most real world situations outside of landscape shots; or 3) come up with a completely new lens design that crams all the lens elements in a small space while maintaining a useful focal length.