In our What to Expect article that we shared yesterday, we covered everything that we think we'll see from Apple in 2021 based on current product rumors and historical release data. 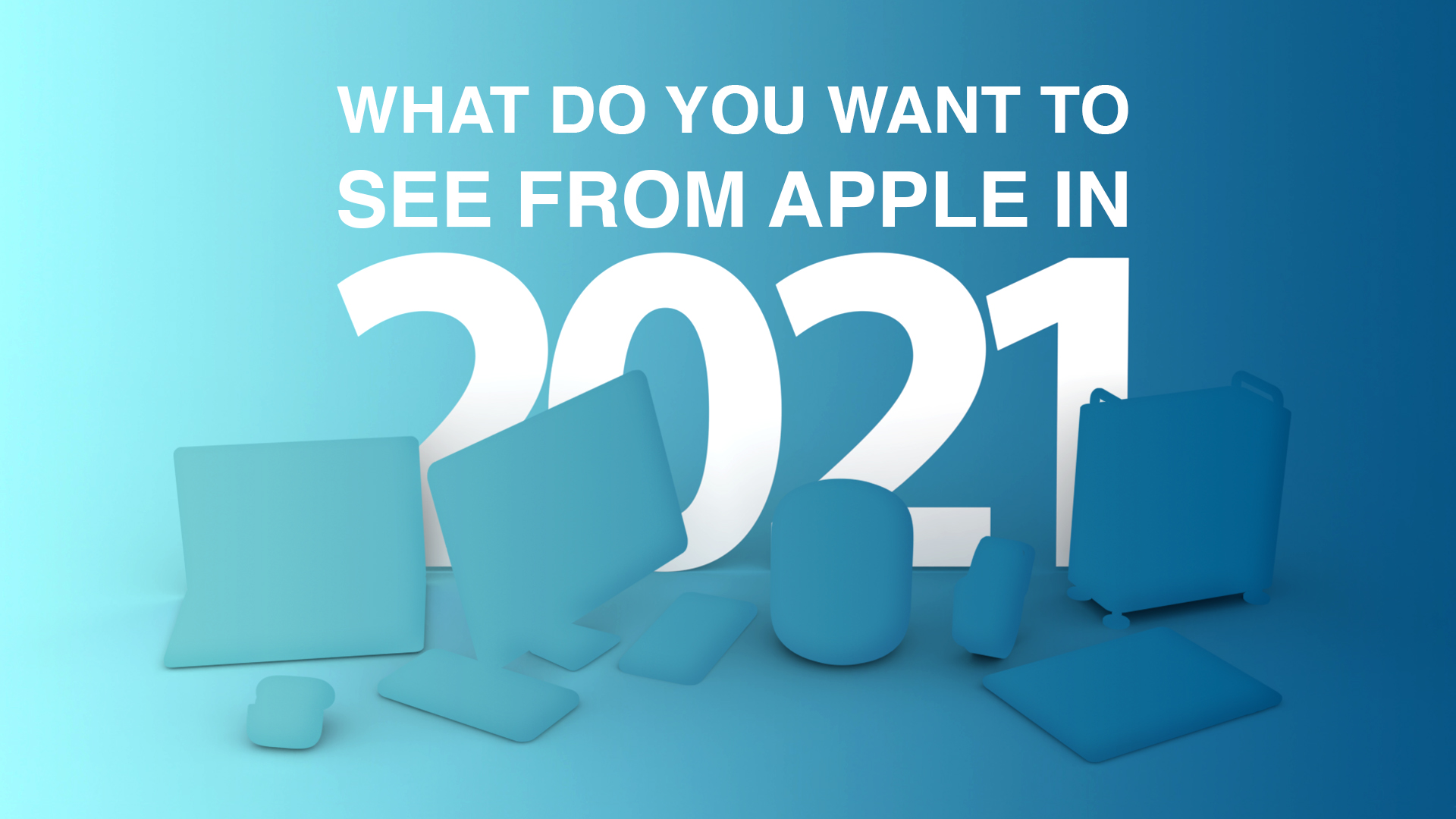 New, more powerful Apple silicon Macs with redesigns, iPhone 13 models with upgraded cameras, new Apple Watch models, and updated AirPods are in the works, plus we're expecting to finally get the AirTags and a new Apple TV.

We know what we think we'll see in 2021, but we want to hear from the MacRumors community. What are you hoping to see Apple release this year?

Are there new features you want to see in iOS 15 or macOS 12? Apple Smart Glasses? Updated iPhone features?

Let us know what you want to see in the comments, and take a look at our What to Expect article for a look at the current rumors. We'll learn more about Apple's 2021 product plans during the first months of the year, and as always, we'll have in-depth rumor coverage here at MacRumors.com.

Our MacRumors forums are also an excellent resource for discussing upcoming products and rumors, and with the most exciting Mac refreshes we've seen in years on the horizon, our forums are the place to be for discussions on what's next.

Thank you to all of our readers and our forum members for continuing to make MacRumors the number one site for Apple news, rumors, and advice on the web. We've been around for more than 20 years now, and that's all thanks to you. We look forward to another year of rumors in 2021 and all of the years to come. Happy New Year!

Article Link: What Do You Want to See From Apple in 2021?

iPhones are iPads are a meh for me. I mean what else Apple can do after increasing price and reducing bundled accessories? Not exciting anymore, unless Apple refreshes the iPhone SE (eg. using the body of the 12 mini and regular 12 to make an A14 powered SE and SE Max with single camera).
Reactions: serpico007, nyctravis, petertorok and 8 others
J

I'd be happy if Apple got back to offering software, hardware, and cloud-sync that "just works."
Reactions: serpico007, njx3, hatchettjack and 43 others
S

Of course the bigger macs, like the 14 and 16" mbp , imacs and the long waited LPTO 120hz iphones
ipad pro with mini-led...also the new design apple watch.....so almost everything from Apple ))
Reactions: Falhófnir, tonyr6, CYB3RBYTE and 3 others

What I want to see:

iMac: New redesigned iMac, with the design you always show on your renders. It is awesome, but it could be even more awesome with a M1X processor. If they achieve a fan less M1X computer with big surface for dissipation, it could help to make the iMac even thinner, but I'm not going against thermodynamic laws.

MacBook lineup: New design for the MacBook Pro, with a better, redesigned and shorter TouchBar. I would make the Touch Bar shorter, leaving the volume and brightness keys as physical keys, and the space between them, make it a shorter Touch Bar. Screen with higher screen-to-body ratio. And Face ID, of course. New 12" MacBook, or even better, a 13" MacBook Air with a smaller footprint and weight, but I'm afraid that's coming on 2022.

iPhone 12S (or 13): LTPO screen on ALL devices (power consumption is even more important for the mini), Touch ID on screen, bigger or better battery -specially on the smaller phones-, better camera system and much faster A15 despite using the same 5nm lithography. 6GB of RAM across the entire lineup, maybe 8GB for the Max.

iPad: New iPad Pro on 11" and 12.9" with powerful A14X and the camera system of the iPhone 12 Pro Max. New iPad mini with a Pro form factor (but no pro features, obviously, otherwise it would be too expensive). I would be excited for the next base iPad with the Air 3 body and A13 chip, if it wasn't because of the white dot screen issue that apparently happens to almost everybody sooner or later. And an iPad is a device that we don't buy every year, but instead every 5-6 years (or more)
Last edited: Jan 1, 2021
Reactions: Falhófnir, iGüey, G5isAlive and 2 others
S

I want to see Apple improving their software quality. There are far too many obvious bugs in macOS that it boggles the mind how Apple let them through into shipping software. (Yes, I've raised them enough times for them to know about them.)

I'd like to see a 14" MacBook Pro with an M1x/M2 chip, and more SSD storage. I'd also like the same in a new Mac mini.
Reactions: T'hain Esh Kelch, Nermal, sedaray and 50 others
R

There’s only one thing that I want from Apple this year: an affordable 5K or 6K monitor.
Reactions: T'hain Esh Kelch, Mr.PT, lauriinc and 44 others
Z

Lossless option for streaming Apple Music -- How can apple, with all its emphasis on multimedia professionals and music, be such a laggard in offering good music quality?
Reactions: Your favorite ideology, KeithBatke, ellocoescoces and 21 others

Major enhancements to Siri
Add watch integration to fitness on iPadOS
Improved stability to AirPod device switching
AirTags
A software solution to FaceID while wearing masks? I mean there must be a work around!
Reactions: T'hain Esh Kelch, TropN, kerr and 5 others

1) Ability to backup iPhone or iPad via cellular option
2) Apple Notes on Apple Watch
3) Ability to backup the Apple Watch separately from the phone.
4) Ability to stay logged into devices when re-installing MacOS without ending up with duplicate devices lists in Messages on the phone and iPad.
5) Ability to add new group contacts on the phone or iPad
6) Ability to create a new Apple ID without having to log out of currently used Apple ID
7) Ability to password lock the stock Mail app
8) Ability to mark tv episodes as unwatched using the iPhone, iPad, or Apple TV remote
9) Ability to change email received sound for different accounts on the Mac
10) Ability to be notified via alarm on other devices, when you have left your watch or phone behind like the app PhoneBuddy does
11) Ability to see the current battery status of all applicable devices logged into the same Apple ID on phone, watch, iPad , and Mac
12) Ability to connect external drive to the iPad and be able to erase and reformat the drive

1. Fix the disk utility, once and for all
2. Fully document how MacOS installation and recovery is supposed to function
3. Apple VPN
4. Apple Search engine
Reactions: T'hain Esh Kelch, Le0M, DCIFRTHS and 12 others

Yeah, Siri on device (just like it works now for dictation) would be a great improvement in speed and accuracy, as well as saving data. What I don't understand is why they didn't implement dictation process on device for the M1 Macs with Big Sur...

A software solution to FaceID while wearing masks? I mean there must be a work around!
Click to expand...

The solution is Touch ID. Shouldn't sound like a revolutionary technology at this point, but I'm sure we'll see a Touch ID screen capable in the near future, hopefully on this year's iPhone lineup.
Reactions: DanTSX, kerr, jchatwood and 3 others

I'd like to see Apple allow all of their default apps to be replaced with third party alternatives, including iMessage, Webkit API and the App store. And if that doesn't happen, I'd like to see the US government and the EU move forward with anti-trust lawsuits against Apple.

I'd also like to see and M2 MacBook Pro and Mac Pro.
Last edited: Jan 1, 2021
Reactions: Slarti.BartFast, Oberhorst, Gakk and 7 others
M

Given that Apple has gone in big for renewable energy, I'm sure they've gained expertise on how to manage power issues when supplied by intermittent sources, base load and storage. I'm sure they could offer products that optimize power management for entities ranging from homes to heavy industries.

And get rid of the Deleted Photos album (or at least let us set the deletion interval.)
Reactions: RandomDSdevel, NetMage, G5isAlive and 1 other person

Filling out the M series Mac lineup is going to be the highlight of the (Apple) year, can't wait to see the iMacs and MacBook Pros
Reactions: The Weatherman, Bea220, ZZ9pluralZalpha and 14 others
C

Richard Baker said:
There’s only one thing that I want from Apple this year: an affordable 5K or 6K monitor.
Click to expand...

?? yes - would like nothing more then a new 5k Thunderbolt Display that is less then $2000 to go with these new m1 MacBooks.
Reactions: DanTSX, Mr.PT, ImageAmos and 4 others