What Will macOS 10.16 Be Called: Mammoth, Monterey, Skyline, or Something New?

Every year heading into WWDC, one question on many Mac fans' minds is what Apple will choose as the name for the next version of macOS. The tradition dates all the way back to the beginning of Mac OS X with its big cat names, and then in 2013 Apple shifted to Calfornia-themed names with the unveiling of OS X Mavericks. 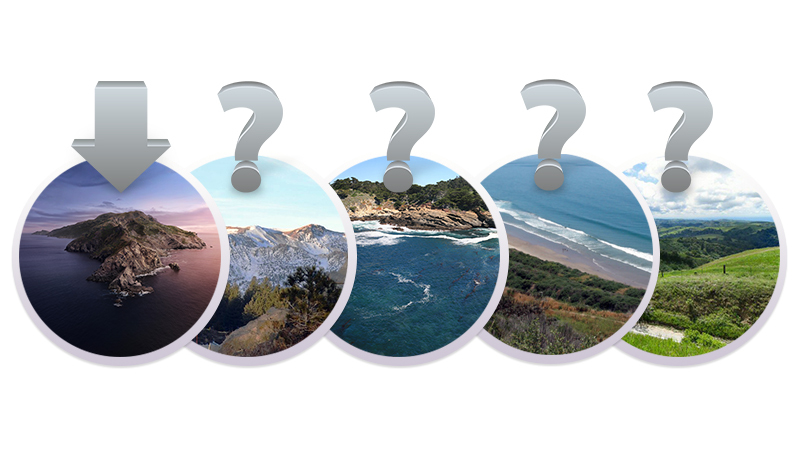 Back in the early days after the debut of OS X Mavericks, we discovered a total of over 20 California-themed trademark applications filed by various limited liability companies that were all but certain to be shell companies created by Apple to hide its identity.

Over time, some of the trademarks like Yosemite, Sierra, and Mojave were indeed used by Apple for its major Mac operating system updates, while trademark applications for many of the other names have been abandoned.

In last year's lead-up to WWDC 2019, we noted that of that original set of trademark applications, only four unused ones remained active: Mammoth, Monterey, Rincon, and Skyline. All four of those trademarks had been granted by the U.S. Patent and Trademark Office, and Apple was keeping them alive for potential use by filing successive extension requests.

Trademark recipients have up to 36 months from the date of approval to file a Statement of Use proving they are using the trademark in commerce, although they are required to file for extensions every six months during that period to keep that full window open.

Apple of course opted to name its 2019 macOS release Catalina, which wasn't one of the previously trademarked names, but in case Apple has opted to go back to its original list, we decided to check back on last year's trademark list to see if any of them remain protected.

Of the four, Rincon is no longer active, having been abandoned in September 2019 after its 36-month window expired. The other three remain active for now, with Apple's presumed shell companies continuing to file extensions as needed.

So what will macOS 10.16 be called? Mammoth, Monterey, and Skyline all seem like reasonable options, but we've also seen Apple turn to names that had not been previously rumored. In years when the new macOS version is viewed as more of a refinement of the previous version rather than a leap forward, Apple has used names that bear relationships to the previous ones, such as going from Yosemite to El Capitan and Sierra to High Sierra.

With macOS 10.16 again seeming to be more of a refinement release, could we see something like macOS Channel Islands (the island group that Catalina is a part of) or macOS Avalon (the only city on Catalina)? Or with Apple reportedly set to begin transitioning to its own Arm-based chips for its Mac lineup, could it shift gears to something completely different? Whatever it ends up being, we'll know one week from today.

Article Link: What Will macOS 10.16 Be Called: Mammoth, Monterey, Skyline, or Something New?

Unoriginal joke, I know.
Reactions: jdiamond, dariolloshi02, -DMN- and 30 others

I wonder if Craig Federighi will make the joke about the “Crack Marketing Team” this year?
Reactions: jdiamond, Mr Todhunter, iModFrenzy and 16 others
B

I don't care as long as they don't release new features and just focus on getting macOS stable again.
Reactions: gwieber, jdiamond, Äpfelchen and 37 others

They should take it off planet..... macOS Andromeda
Reactions: Humbolic, EmotionalSnow, Traverse and 13 others
L

I hope for Skyline every year.
It’s just got a refreshing sound to it, and refreshing is what we need after the disaster known as Catalina.As Monterey is a vacation spot, it’s also A good name.
macOS Mammoth just sounds stupid.
And as for names related to Catalina, I think that Catalina has such a terrible reputation that Apple should just move on
Reactions: ignatius345, Mr Todhunter, iModFrenzy and 4 others

Yeah, because after a year with Catalina, Weed is what we need
Reactions: bruno7, Hastings101, Braderunner and 19 others

Considering I finished Big Little Lies during quarantine, I would LOVE for it to be named Monterey lmao.
Reactions: ignatius345 and EmotionalSnow

I’ve been saying this ^^^ for months. Catalina needs a stability pass. They’ve done this before by having versions that were named more specific variants of the previous version (Leopard->Snow Leopard, Yosemite->El Capitan, etc.). Avalon is the most prominent feature on Catalina island (the main/only city). If Catalina gets the cleanup pass it desperately needs, it’ll be named Avalon.

Or they could just entirely stop caring and we get macOS Bakersfield or macOS Death Valley.
Reactions: gwieber, Tagbert, FontGeek and 17 others
M

Some other potential macOS name ideas:

i am betting on macOS Avalon, Avalon is on the island of Catalina.
Reactions: KPOM, Treq, jchap and 7 others
L

MacOS Chaz
Reactions: Yptcn, FontGeek, IIGS User and 8 others
A

Let’s go Mammoth 🙌
Town was really decimated by the virus, could use the attention.
L

With how poorly Catalina was received, if they go with any name that still has Catalina in it, I would be extremely surprised. That would be like Microsoft calling Windows 7 windows SuperVista
Reactions: Äpfelchen, -DMN-, freedomlinux and 15 others