The below image and comparison site should help 🙂 basically if you plan on doing anything that is Graphically intense then the iPad Pro 2020 should be your go to device, it has the 120hz screen, the 8 core CPU + 8 core GPU and 6GB RAM, along with Quad Speakers, FaceID and Dual Cameras with LiDAR.
While the Air 2020 has a A14 with 6 core CPU + 4 Core GPU, 60hz screen, Dual speakers and will probably be a good all rounder. 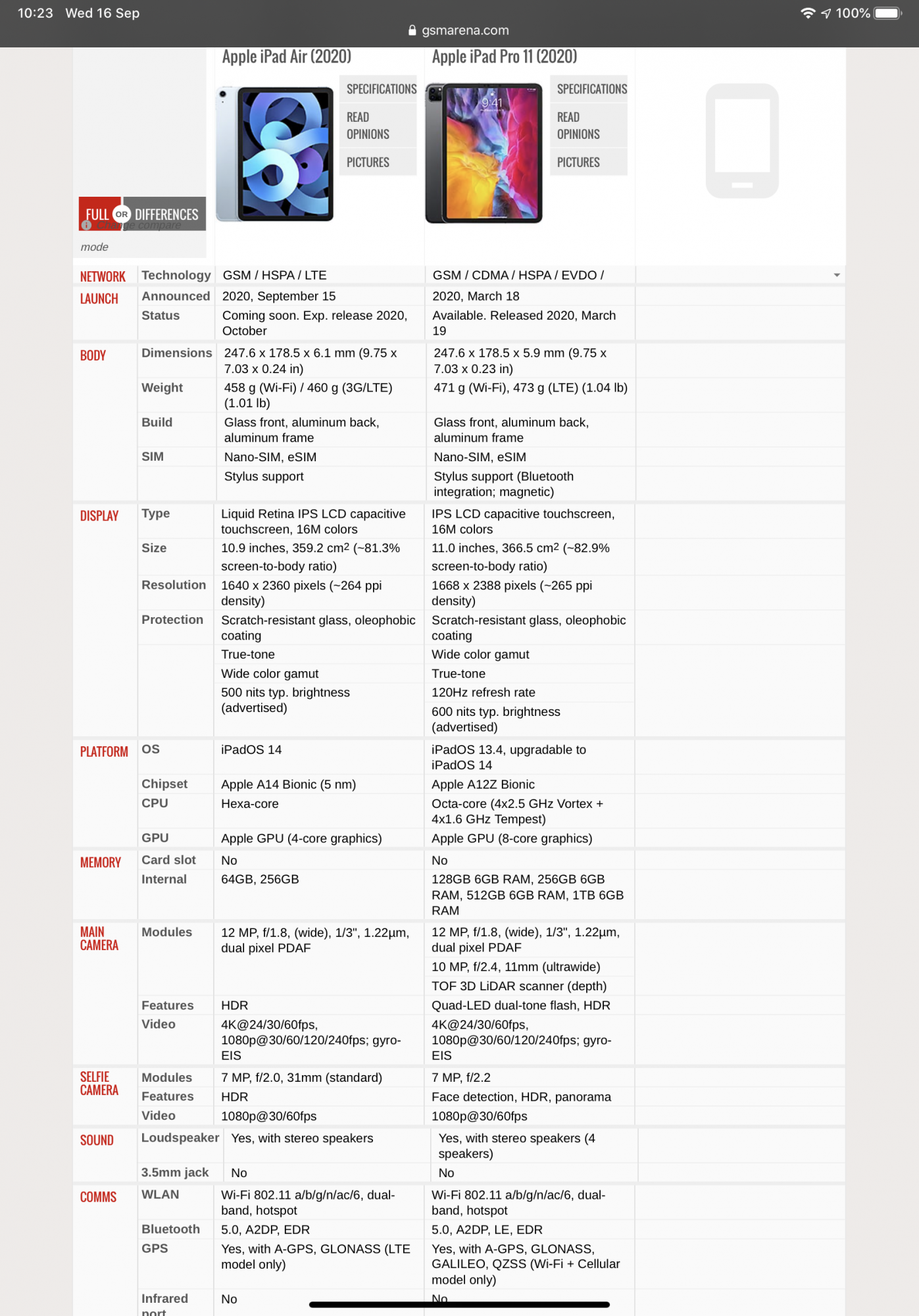 The more I look into the A12Z the more I realize how far ahead Apple were with the A12X, because it seems even the A14 will fall a little short here despite being newer, the A12X/Z chip packs more High performance cores in the CPU and more cores in the GPU.
Last edited: Sep 16, 2020
Reactions: George Dawes, Shirasaki, chabig and 1 other person
C

This is my dilemma, think I’m going to stick with the 2020 pro (and just hope they don’t release a new one this year 🤞🏻)

the air is nice but not enough storage on base model for me
Reactions: arefbe, calliex and Sarbun96

Cardiff25 said:
This is my dilemma, think I’m going to stick with the 2020 pro (and just hope they don’t release a new one this year 🤞🏻)

the air is nice but not enough storage on base model for me
Click to expand...

All going well with the supplies, etc. due to the Covid pandemic, we could still hope for a more substantial Pro refresh next spring (March 2021), so it all depends on when you need it.
Reactions: limesmoothie
C

I just bought an 11" Pro 512GB last month... thank god they didn't replace it so soon! I think the more RAM / power of the Pro will still outperform the A14 in most situations. But we'll need to wait and see
Reactions: limesmoothie
S

One difference not mentioned - Lightning port on the new iPad vs. USB-C on the Pro. I was glad to get away from Lightning with my last upgrade to the 12.9 Pro.
C

Sarbun96 said:
I just bought an 11" Pro 512GB last month... thank god they didn't replace it so soon! I think the more RAM / power of the Pro will still outperform the A14 in most situations. But we'll need to wait and see
Click to expand...

How you liking the pro?
Reactions: Sarbun96

sparksd said:
One difference not mentioned - Lightning port on the new iPad vs. USB-C on the Pro. I was glad to get away from Lightning with my last upgrade to the 12.9 Pro.
Click to expand...

The new Air
has the C
as well
Reactions: snipr125 and sparksd

ah, you're right - thanks for the correction!
S

Cardiff25 said:
How you liking the pro?
Click to expand...

It's fantastic. I love it for reading, doing some basic computing like budgeting, designing a bit of furniture etc. Being able to put it in the car door bin when I go somewhere and use it places you'd never use a laptop. Sure, it's not the same as a full on Mac, but right now, I'm working from home 8.30-5pm every day, and to be honest, I don't care if it's a 24 core Mac Pro and XDR display on my desk, I don't want to spend the remainder of my day stuck at that same desk. So though I'm a power user of Excel and Access database development in my day job, it's overkill in my use case to use a full Mac or PC after hours. That's time to kick back and do non demanding computing and for me that's where the iPad shines.

With my Mac, it was great, a pleasure to use, fast as hell (even though it was a 17 model) but I was just sitting staring at it most of the time to be honest - not making much use of it. And I've always had Macs since being a teenager and spending hours on them everyday. The iPad fits into life a bit better with me using computers constantly at work.
Reactions: George Dawes and limesmoothie
X

What the Pro has that the Air does not:
Am I missing anthing?
Last edited: Sep 16, 2020
Reactions: George Dawes and Cassie2015
N

iPad Pro is 200$ with only a few small differences, though it depends of your use case of course. However, if they launch a new iPad Pro with A14X it will blow away this iPad Air.

The new lineup is a bit awkward, the iPad mini costs more than the iPad but apart from the smaller screen the specs are very similar. So I think the iPad mini and the 11" iPad Pro will be difficult to sell until they are updated as well.
S

It's also got that wide angle camera
Reactions: xxray
T

Is it already confirmed or tested somewhere that Air 4 has only 3GB RAM???
Reactions: dano0726 and harriska2
S

I'm wondering if that 0.1" difference shows up in the bezel thickness.

The Pro's screen resolution is ever so slightly larger and perhaps a slightly smaller bezel. Until we see them up close, and compare, it's difficult to know at this point.

also, Apple is throwing in AirPods with the promotion they’re running at the moment

The 2020 Pro has 6 GB of RAM. I doubt the Air gets that much, probably 4.
Reactions: George Dawes

The best iPad is the previous generation iPad Pro with the single camera bought at a discount.
Reactions: Wando64, masotime, AutomaticApple and 2 others

Air will probably have 4GB RAM, which will be ok for the Air. The 2018 Pro’s had that and they are very capable. But the thing is, the base storage for a device like the Air should be 128GB. 64 is not enough and is a mismatch for the feature set.

This means you are going to have to go with 256GB if you choose the Air, and then the price difference between the Base model 128GB 11” Pro and the 256GB Air is only $50.

I have the 1TB 2018 11” Pro, and have it loaded up good, and am currently using 132GB only. That is fully iCloud sync’ed including 50k photos and videos as well as iMessage media, iCloud Drive, etc. with iCloud storage optimization turned on, but not using the Offload unused apps feature. A quick look tells me I could save 44GB or so by using this feature.

On my 128GB mini 4 I restored it from my 11” Pro backup, so it is identical with identical apps and device/iCloud settings, and it uses 85GB right now. Difference being that iCloud Storage Optimization keeps a healthy amount of headroom.

Heavier users that want media stored locally on device would need more, at least 256GB if not more. I find that 256GB is a bit cramped on my Macs, but have never even really had to think about storage on my iPads after going 128GB+ on them since the first iPad Air.

My point is this. How compelling an argument can you make for the iPad Air when it is so close in price to the base Pro when you account for having to go for the higher storage on the Air? I mean, for me, the 120Hz Pro Motion screen, 2GB RAM, and A12Z is not worth $200, but it probably is worth $50?

Hard one! Interesting how hard they make the choice, because they really probably originally planned to not leave the Air hovering that close to the Pro for very long. I honestly think that they were going to release this in October with the Apple Silicon Macbook(s) but then had to swap them with the iPhone when it became clear they weren’t going to make the window for the iPhone. I mean the Air isn’t shipping until October either!

Yeah, the working memory will be a big factor in how long you can keep the thing around. My ipad pro 12.9 from 2015 is still kicking because it has 4 gb ram, almost unheard of back then. I would wait to see what the air has as far as RAM before deciding. If it is only 3, no. If 4, maybe. If 6, it is a decent deal. We got the 11" pro back in March for something like $750. But it had 128 gb storage and 6 gb RAM, making it something that will likely last 5 years. Yeah, we tend to keep ours around for a while.