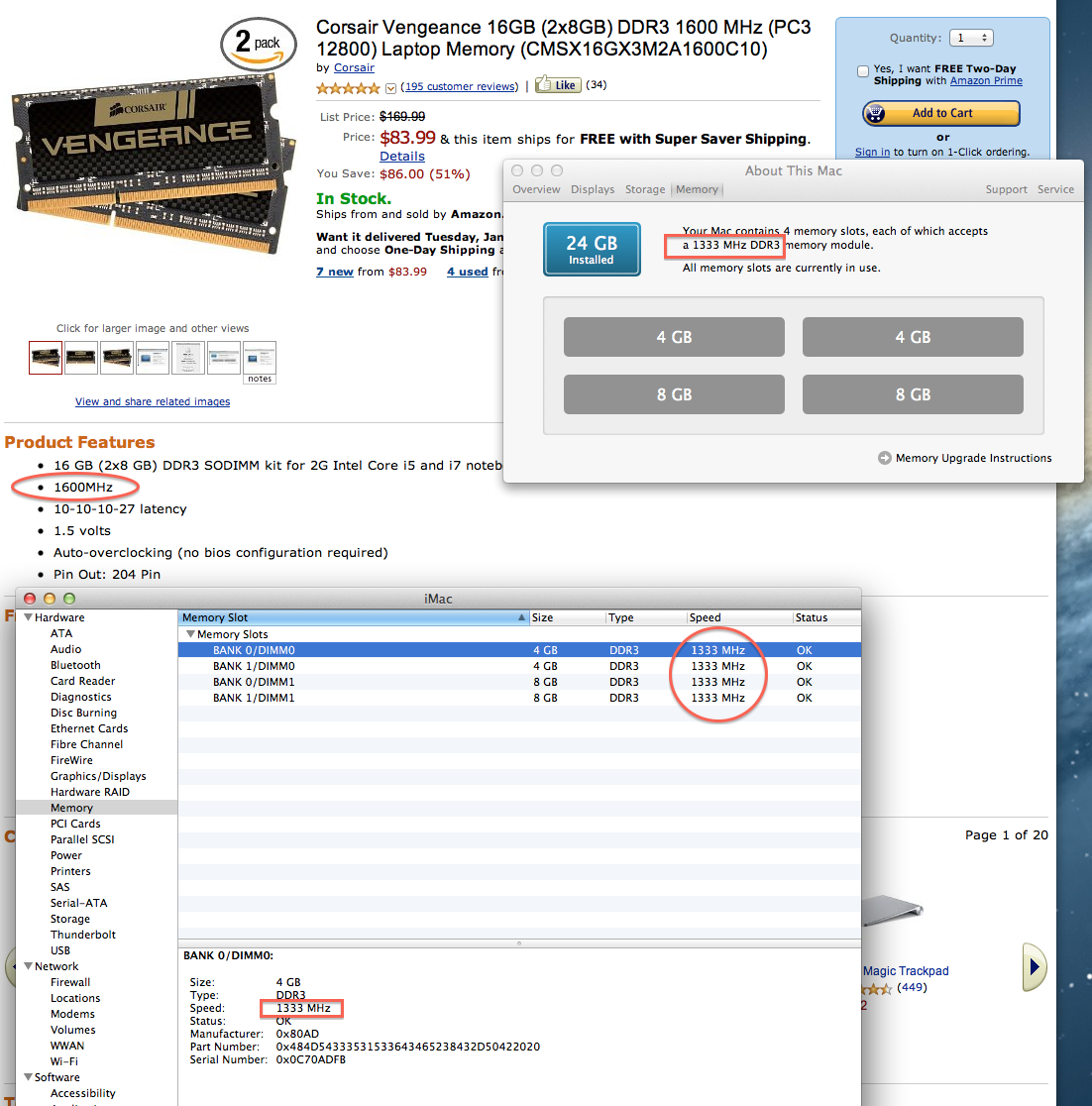 Hey guys I need your help!

I bought two 8Gb sticks of Crucial PC-12800 RAM to augment the two 4Gb ones that come default from Apple.

Everything comes up great with a single tri-tone "bong" and the system runs fast so I haven't given it much thought in the week and change since it arrived. I've been running old/new x86 apps (came from a PowerMac Dual 2.3 G5), doing a ton of blu-ray encoding/burning form Toast 11 and even Win7 and Win8 under Fusion 5 with 8Gb of RAM assigned to the VMs. So the 24Gb of RAM has had its workout.

However, like all people who've just bought a new computer or have added a performance related upgrade, at some point I looked for performance benchmarking apps to run and ran geekbench.

While my score of 12878 is right in the pack for even those whose memory shows up as 1600MHz, it was this and the thread of "show your About This Mac" that finally got me to notice the 1333MHz instead.

I'm about to run memtest to see what's going on. One thing I've done is to pull out one of the 8Gb Crucial sticks to at least see that it's labeled 1600MHz just in case I received the wrong product.

The other thing I intend to do is to leave in just the apple ram and then just the crucial ram and see what the profiler shows.

Any insight? Thanks!
B

Because you're mixing sticks and once you mix RAM of varying speed. The lowest speed RAM sets the overall speed.
N

I've had the exact same experience, using the same brand of RAM.
What is the conclusion here?
I could pop out the Corsair RAM to see what speed Apple RAM ships at, but that's a hassle I don't want to bother with.

It's hard to believe that Apple would ship with 1333 RAM because their official docs state that the RAM for iMac late 2012 should be 1600.

What I've been told (though I've never been given a reason) is that the issue is not differing speeds of RAM but differing sizes. This would match reports from people who have installed 4 Corsair sticks and are running at 1600, not 1333.

It's not clear to me how the four slots map onto the two memory channels.
If we call them 1,2,3,4 then the way iMacs seems to ship is with slots 1 and 3 filled, 2 and 4 empty.
My assumption is that better performance is obtained by putting each DIMM (in the case of two DIMMs) on a separate channel, which implies that 1,2 map to the first channel, 3,4 to the second. Which means that if you just add the 8GB DIMMs to slots 2 and 4, you'll have mixed pairs attached to each channel.

On the assumption that this might be what's causing the slowdown to 1333, and that this means I can't get paired DIMMs, I altered the pattern so that I have 4GB in lots 1,2 and 8 in 3,4. Unfortunately this does not change anything. The ram is still driven at 1333, and the Geekbench memory and streaming scores are basically identical in both configs.

Right, make sure that bank 0 contains matched 4GB sticks and Bank 1 contains matched 8GB sticks. This should sort the problem out. I think it is colour coded so every other slot is where the paird modules go. Doesent matter which way round just make sure each ram pair is in each of the two duel channel memory banks.

To be honest I would not have specified coursair vengence ram as it runs at a higher voltage to the stock apple ram. It should still work in this configuration though!
P

is it crucial like you mention in the post or corsair like you show in the picture? there is another post (that I can't find now) which seems to say if you mix CAS latencies of 10 and 11 , the 1600RAM will run at 1333, but I don't know why. I believe Apple is CAS 11 while Corsair is CAS 10

You keep saying Crucial in your posts but you show a screenshot about Corsair RAM. Which is it?

The timings are different. You bought CL10 RAM, while the Apple installed RAM is CL11. The mobo will operate the RAM at the highest frequency that all RAM can use at the best latency of any RAM installed. So CL10 is selected, and Apple's RAM can support CL10 at 1333MHz but not 1600MHz, so down to 1333 you go.
Reactions: keysofanxiety

forty2j said:
The timings are different. You bought CL10 RAM, while the Apple installed RAM is CL11. The mobo will operate the RAM at the highest frequency that all RAM can use at the best latency of any RAM installed. So CL10 is selected, and Apple's RAM can support CL10 at 1333MHz but not 1600MHz, so down to 1333 you go.
Click to expand...

thanks ! learn something new everyday .
S

A simple search of this board will bring you to this thread: https://forums.macrumors.com/threads/1508059/

Which answers the OP

Shoot the question should be a FAQ or a Sticky
D

It has nothing to do with the RAM speed, it's due to the latency. The stock iMac RAM is 1600MHz at the default standard of CL11. The Corsair RAM is CL10 and forces the memory controller to CL10, which, in a way, is overclocking. The original RAM isn't spec'd for 1600MHz at CL10, so the memory controller reads the memorys internal speed vs latency table and downclocks to 1333MHz at CL10. This causes all RAM to run at 1333MHz. The best solution is to replace the original RAM with 1600MHz CL10 RAM.
M

The memory you got from Amazon doesn't show detailed specs, but it does say "10-10-10-27 latency". If you dig up detailed specs, I'm pretty sure you'll find that memory has only 10 cycles of column latency at 1600 MHz. That is, on its own it can run slightly faster than the stock Apple memory.

But when you mix memory with different specs, the iMac firmware configures the memory controller so that both banks run with the same timing parameters. The Apple/Hynix can run with 10 cycles of column latency according to the spec, but it has to slow down to 1333 MHz. Evidently 1333 MHz/CL 10 is also compatible with the Crucial memory you bought, so the iMac runs all the memory with those settings.

I don't know how to read the memory controller to find out how it's actually configured on a running system, so you may not be able to verify the column latency situation I described above. But you should be able to find data sheets on the web for both of your memory types, and look for incompatibilities in the specs that explain your 1333 MHz operation.

Next time you have the RAM out, please post the part/model numbers from both kinds of memory.

Hmmm... Looking at the posting times, it looks like a few of us were composing our answers at the same time.
M

drambuie said:
Hmmm... Looking at the posting times, it looks like a few of us were composing our answers at the same time.
Click to expand...

Four of us! Plenty overkill.

I just checked Crucial's web page. The memory they recommend for these iMacs is CL11, and a few dollars cheaper than the CL10 memory from Amazon that the OP bought.

I wonder if anyone has verified that the iMacs run 1600 MHz/CL10 if all the memory in the system supports it. They could probably run either CL10 or CL11, and Apple might not choose to enable the faster mode if they didn't test it extensively.

Someone in one of these threads installed a complete set of CL9 1600MHz without issue. Crucial's recommendation is just the factory spec.
M

forty2j said:
Someone in one of these threads installed a complete set of CL9 1600MHz without issue. Crucial's recommendation is just the factory spec.
Click to expand...

It works, but does it actually run at CL9 speed? It could be running at CL10 or even CL11, and it would be pretty hard to measure a performance difference.
1

If Apple shipped 1333MHz RAM with your 2012 iMac, you should take it in and and have them look at it and give you the 1600, since that's what it should have come with.
D

If it's mainly a matter of what the i7 3770's memory controller can handle, it will gladly go to over 2000MHz, but the sweet spot is 1600MHz. In PCs it will do CL7 at 1600MHz with XMP RAM, and even higher, but that's definitely overclocking.

I think you don't understand what causes this issue. If he removes the 8GB sticks then his stock RAM is going to run at 1600mhz.
E

you cant mix different ram modules thatd fix your issue, get other sticks of corsair memory and they will all run at 1600mhz
P

I have some CL 10 ram in my 2012 without no speed or error issues. I didn't attempt mixing it with the stock ram though.
F

daneoni said:
Because you're mixing sticks and once you mix RAM of varying speed. The lowest speed RAM sets the overall speed.
Click to expand...


forty2j said:
Someone in one of these threads installed a complete set of CL9 1600MHz without issue. Crucial's recommendation is just the factory spec.
Click to expand...

Prior to plugging in my new iMac for the first time, I removed the factory memory and installed four sticks of Crucial memory (p/n: CT3650282) and it is running at spec 1600MHz.

The more appropriate question is why not just shell out $80 more and have 32GB of fast RAM? You spend $2200+ on the computer, why would you not spend an extra 4% and put 4 of the same chips in there? It's about the most inexpensive, and cost effective upgrade around these days.
You must log in or register to reply here.
Share:
Facebook Twitter Reddit Email Share Link
Register on MacRumors! This sidebar will go away, and you'll see fewer ads.
Sign Up
Top Bottom