Why is Apple trying to copy Android?

Back in the Jobs days any change would be something new. I can't figure the company's approach to take on Android by doing everything they do. From rumoured low end iphones to the larger screen and now the OS looks like it. Apple always say about users being satisfied by OS and not Android?

Apple think it's easier but it's going to be awful on the eye, the lines, the circles from emails look like Facebooks new chat system on the Iphone.

I really think people will notice a less pleasurable experience on the Ipad. The depth and quality will be gone with the removal of the felt and notebooks.

What should Apple have done? Well it's great Siri is improving. I'd have made Safari silver to match the Ipad, I'd have added folder windows to hide them, having multiple pages in IOS7 is good yes. Still no wiglets either? The lock screen had to change but not by being more flash like. It definitely looks slower than IOS6 so will be interesting to see how Iphone 5S handles it.

I'm personally now looking at getting an Ipod touch and ditching my Iphone 5 for maybe Blackberry or Sony. Not an Android fan but these phones have blues and darker shades in the OS. Iphone looks like a rainbow now, the pop up status bar with changes looks the worst. And yes it's worse than the leaks..so after some thought I'm not liking it.

I have another question why did they ditch the current Siri voice? I'm not anti Apple I hate Windows 8 and like many I run windows 7 which is better. Sometimes change isn't always good. MS Xbox One is also a step back..pre owned games ect..the size of it looks awful.

Sony lost there way for a bit with Sony Ericsson. The Cybershot phones were amazing, better than the 3GS at the time..I jumped ship after the Satio failure and I always knew even Apple had a time limit before they wrecked the OS or hardware design. Sadly keeping IOS6 can only be a short term fix as updated apps mean they might not work right and you have an obsolete device.

I'm seriously considering quitting Apple products now. I think leaving now is better before it becomes a sinking ship. Yes some like the change but there's a core fan base who hate it. I bought into Iphone from user experience from the 3GS which had a crap camera, rubbish features so I stayed clear..For me Apple are now just being a market copier and the design isn't better..so your aswell jumping to Android and enjoying the 12MP camera and larger screen and all what else they offer Apple don't.

But yes I think Sony are on the up again. I have a feeling PS4 will come back and beat Xbox One and the new Sony phones look decent. Blackberry seem good too. Z10 looks like IOS in ways even if it doesn't offer everything Android does.

Anybody else who is thinking of quitting what devices are you looking at? I will be avoiding the Galaxy though.
H

It's a phone/iPod/iPad and who cares.

Like what you like for whatever reasons you like it, don't worry so much. Apple always borrows ideas from other people but they improve on them(my opinion of course).

Apple knows people are going to buy their products and if one less person doesn't, I don't think they really care.

So much of this post doesn't make any sense.

There may be an overlap in features but apple isn't copying android. I honestly don't get what people want. People whine and say apple is too far behind and they need to catch up. Then when they do, all people do is whine about how they copied android. Good god.

Sent from my Nexus 4

TacticalDesire said:
There may be an overlap in features but apple isn't copying android. I honestly don't get what people want. People whine and say apple is too far behind and they need to catch up. Then when they do, all people do is whine about how they copied android. Good god.

They copy and call it innovation. iOS looks nice, but I couldn't help bit laugh when they introduce features that have been available with the little robot for years.

Guess that's how it works. Oh well welcome to the future iPhone users

Sure it does, it doesn't to you since it puts apple on a bad light.

No but props for calling them "wiglets."

We all know that Android was the first OS in the world, and the first OS on a phone. Nobody NOBODY had anything before Android. Nobody.
C

I agree a lot of the features of iOS 7 have been on Android for awhile but what are you gonna do. At the time Apple did think they were important but now they do....
I

sk1wbw said:
We all know that Android was the first OS in the world, and the first OS on a phone. Nobody NOBODY had anything before Android. Nobody.
Click to expand...

I think Apple did a nice job with IOS7.

I know some on these forums wanted more, but we need to understand that we are the minority. IMO, Apple has a firm understanding of what their main demographic appreciates about their devices and that is who they are catering to. While the features are already there for Android users, it requires some thought on their part to have it integrated to where it is the most the productive for the person making the implementations. Most Apple users want it to just work and work well out of the box, as the learning curve is shallow (if any at all) and requires the least amount of gestures possible.
J

Welcome to the real world.
E

There are only so many ways something can be done. 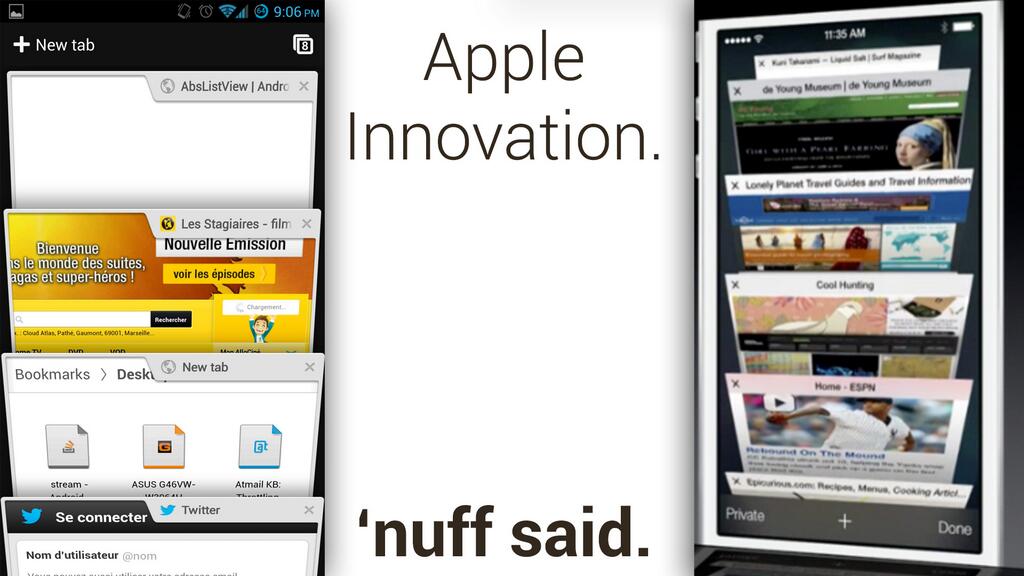 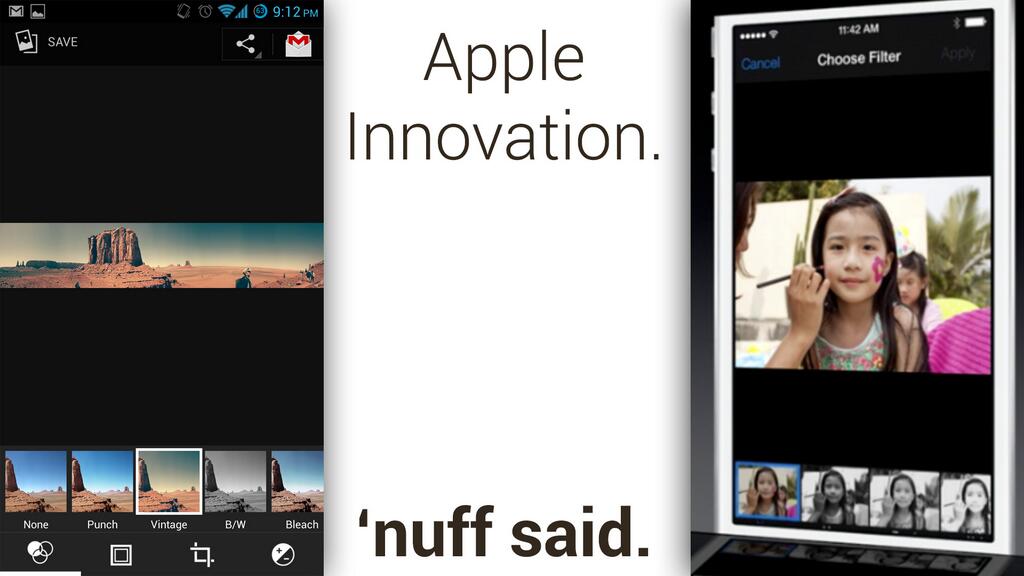 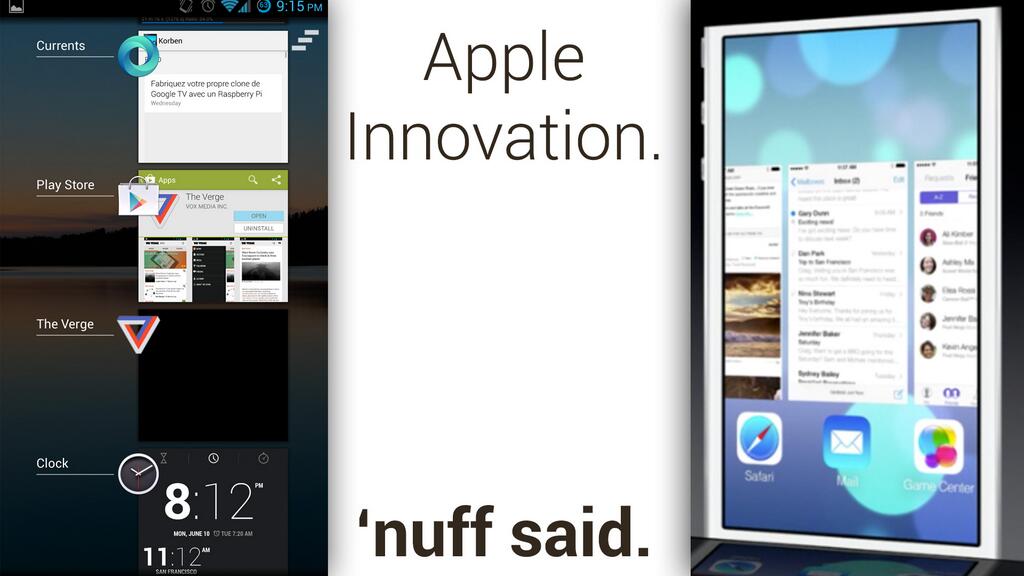 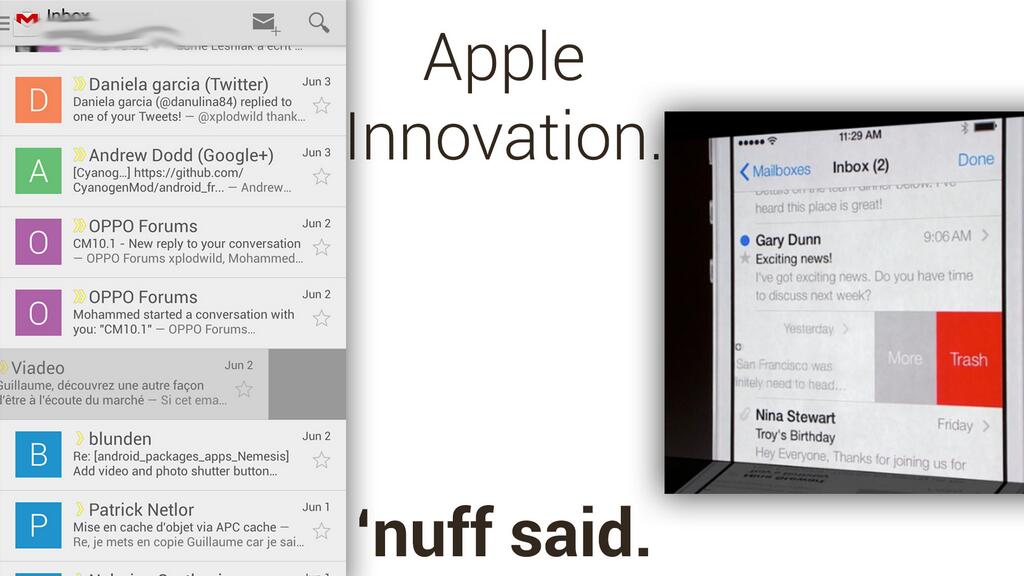 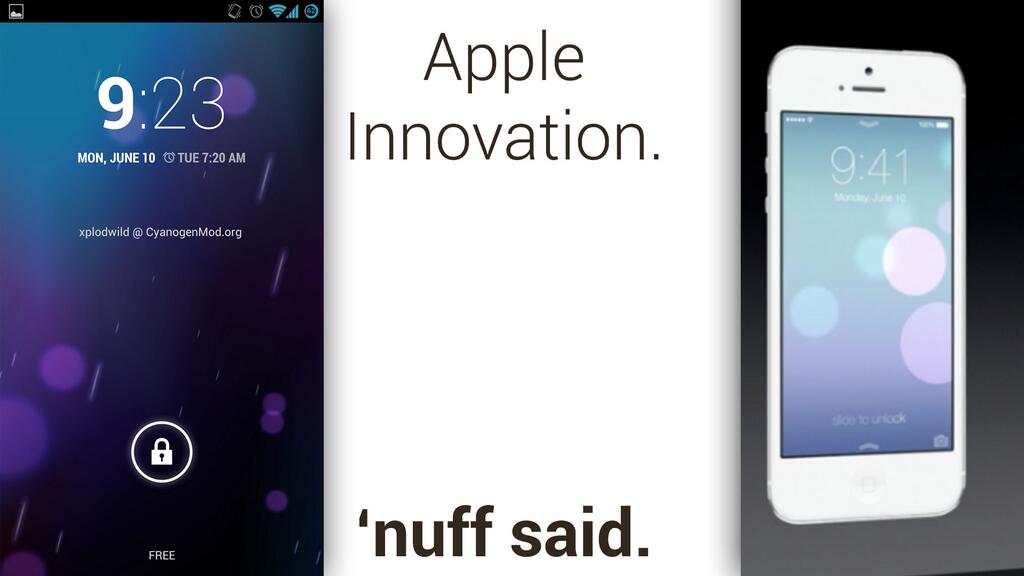 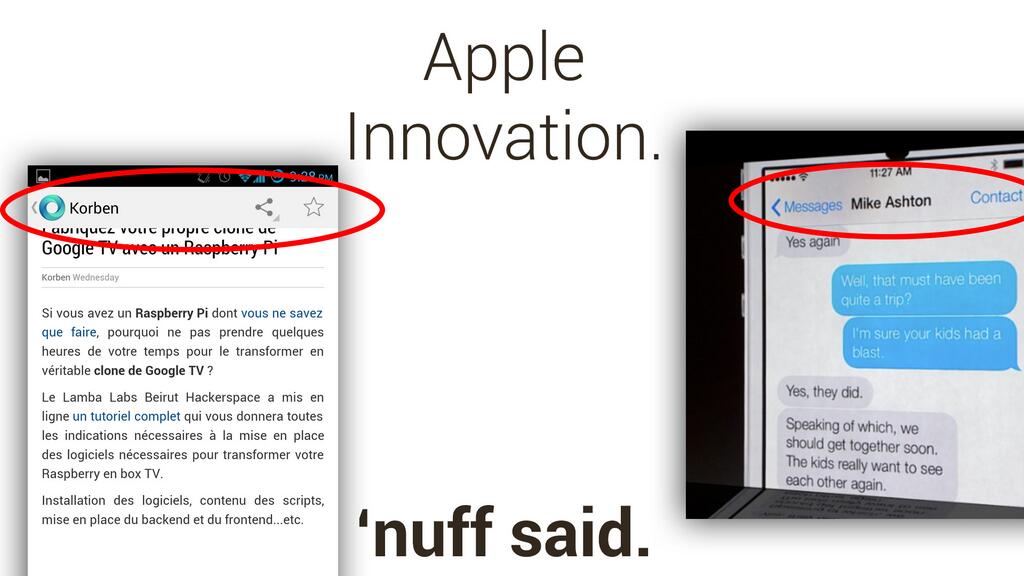 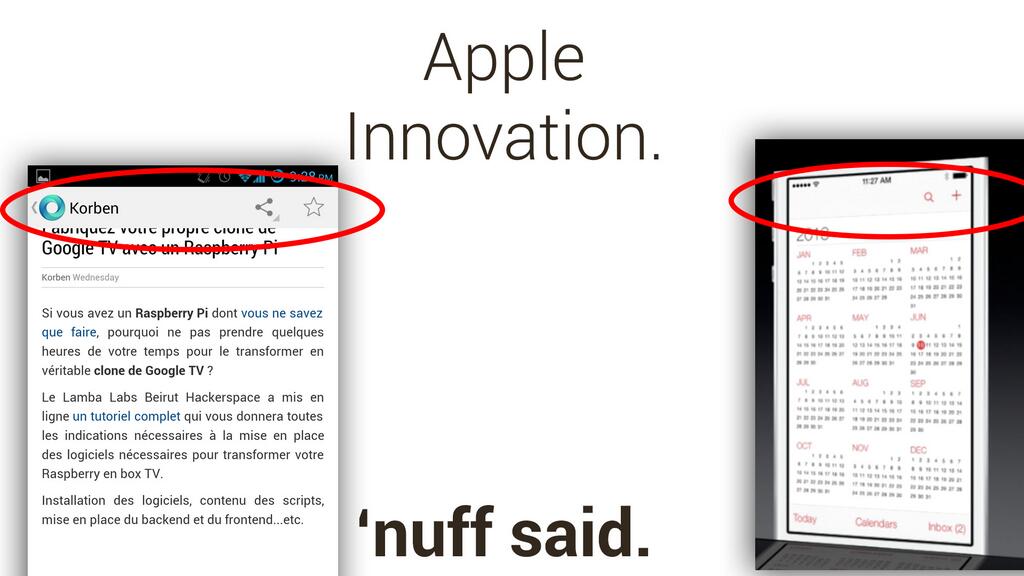 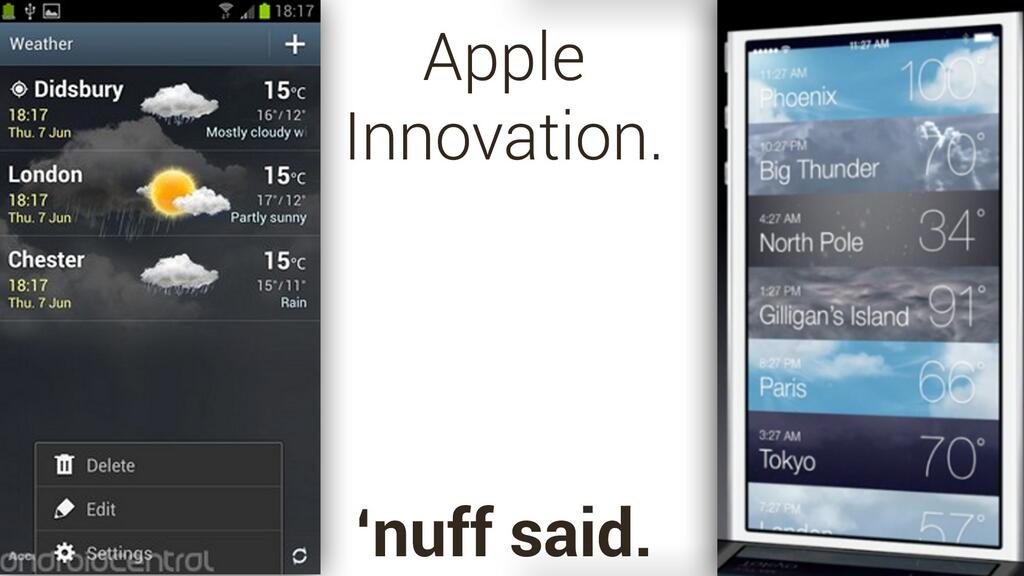 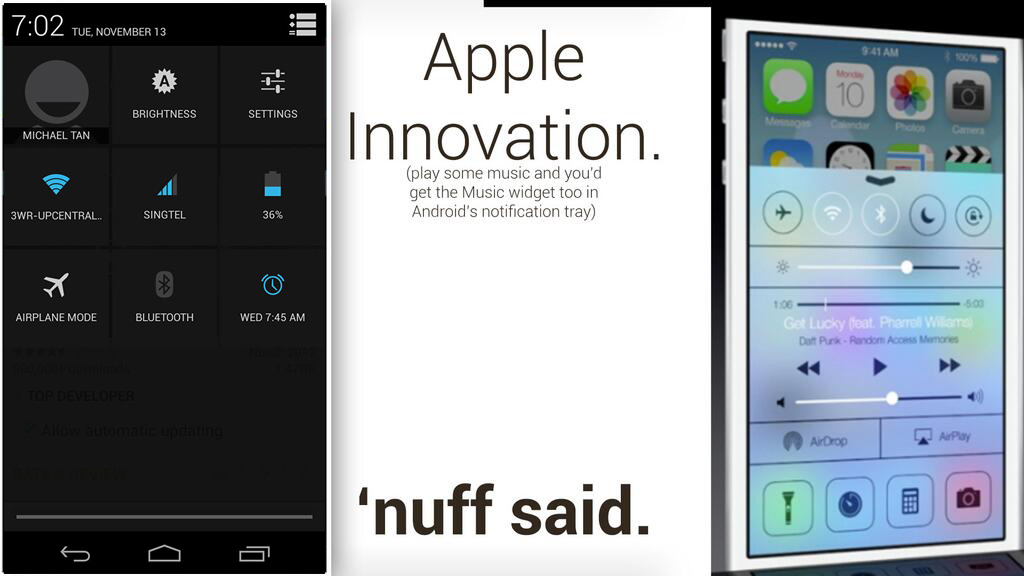 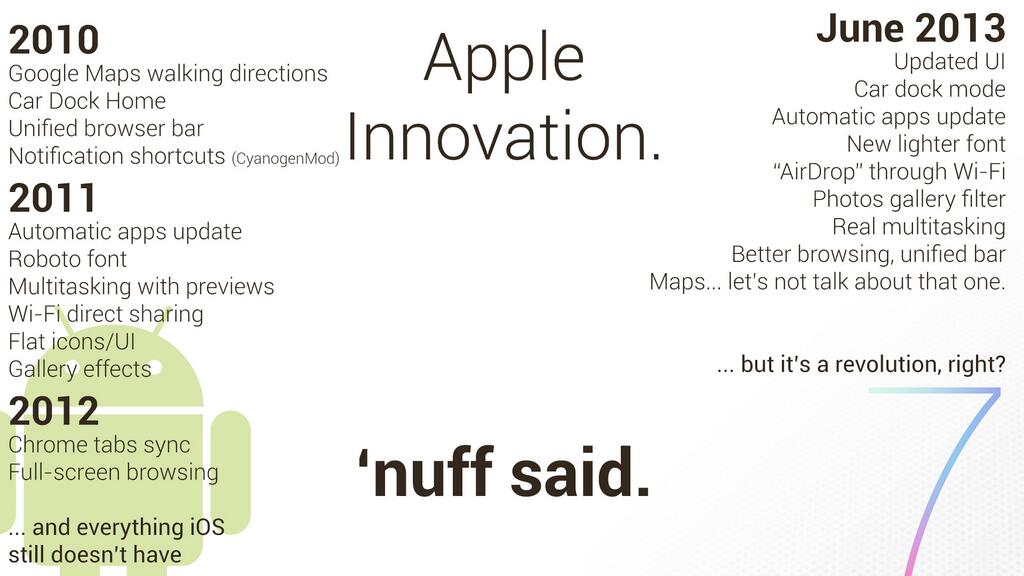 Meh, I don't care whether they copy or not. Copying is going to help me enjoy my iPhone anyway lol, why should I be crying?

However, I find the new look disturbing, cartoonish, and less cohesive compared to current ios6 on my iPhone 5, and am disappointed that all the resources were used to make that theme instead of adding many more good features.

I don't think Apple is copying Android. I think they are copying My Little Pony theme though. And since you can't change the icons at all, this is what you are stuck with. Like a guy driving a soccer mom's minivan. Sad.

I, for one, am glad Apple is ripping off Android

Apple has long been adored for their design genius. However, these past few releases of iOS, it's becoming increasingly clear they're now followers rather than leaders.

"Imitation is the sincerest form of flattery"

I honestly believe this validates everything Google has done with Android. Not only that, but if all Apple is going to do is follow Google, that means Google will always be several years AHEAD of Apple.

Josh topolsky has a great and agreeable article on the verge about his thoughts on iOS 7.
A

I personally don't mind the copying. In fact I wish apple would copy more things (can't believe there still isn't some sort of upgrade to the keyboard nor any swipe option).

But let's face it, if the tables were turned and android came out with their new look after ios 7, certain apple fans would be the first to point out that android was copying apple. Any of this sound ironically familiar?

For example if animalx's picture above comparing the lock screen was reversed order we'd never hear the end of it. And we'd probably see lawsuits, too.

Go ahead and switch? Apple is not forcing you to stay. Calm down and quit crying.

onthecouchagain said:
But let's face it, if the tables were turned and android came out with their new look after ios 7, certain apple fans would be the first to point out that android was copying apple. Any of this sound ironically familiar?
Click to expand...

It is a given that when Google eventually applies the same design language they have been incorporating in their apps into the next version of Android that "cerain apple fans" will start saying how Google copied Apple and what not.

animalx said:
I'd beg to differ..
Click to expand...

Apple's defense at trial:
Those images look nothing alike. The bubbles aren't the same size and our clock is right margined, not center.

Apple's offense at trial, if Google had made a similar lockscreen:
Google copied. See those bubbles and their rounded corners! Obvious and blatant copying.
O

I feel the changes in iOS 7 is a step back into 2D.

OceanView said:
I feel the changes in iOS 7 is a step back into 2D.
Click to expand...