You are using an out of date browser. It may not display this or other websites correctly.
You should upgrade or use an alternative browser.
O

The official Wikipedia App for iPhone/iPod Touch is out and is free.

Thanks for this. Just tried it and its ok. Slow. The other two wiki apps (wikiamo, wikipanion) are better right now. Lets see how it improves over time.
Comment
G

installed it and removed it.

garethjs said:
installed it and removed it.

Same here...Wikipanion is much better at the moment.
Comment 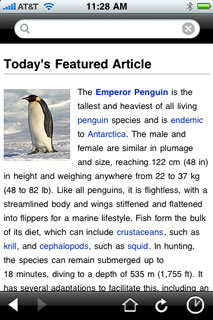 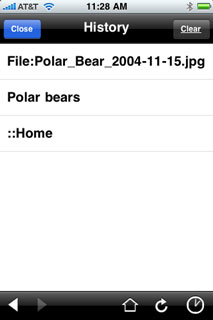 Wikimedia Foundation has released an official iPhone app to access Wikipedia, the online collaborative encyclopedia. The app offers an alternative to browsing Wikipedia's mobile version via the Safari app. Its App Store description states that the app's code is "100% open source and community built" and programmers are welcome to help with the app.

Focused on "being very simple and very fast," Wikipedia Mobile's current feature list is small compared to other existing apps - both free and paid - that offer capabilities such as bookmarking, offline viewing and the ability to change font sizes.

and getting the latest

Misinformation lol ya gotta love the wiki! can't just get the wiki info doing a google search. oh well need to acces the Wikiperdia (We have a App for that!)
Comment

Better/Worse/The same as Wikipanion? I guess I could try it and find out...
Comment

Nicely written app. I'm never going to get back down to two pages of apps at this rate.
Comment

It looks good. As for misinformation, it is not 100% right or wrong. I tend to think it does more good than bad.
Comment

labman said:
Misinformation lol ya gotta love the wiki! can't just get the wiki info doing a google search. oh well need to acces the Wikiperdia (We have a App for that!)
Click to expand...

I keep hearing that wikipedia isn't a good source. I find that to be untrue (for the most part. There are articles that are certainly biased or whatnot).

Wait, so if I see it on the Internet, it's not necessarily true?
Comment

how does it compare with Wikiamo (which I like)?


some of Wikipedia's content may be wrong or misleading but its a great source
for info you could find no where else.
Comment

When I went to college, which was within the last 8 years, we weren't able to use wiki unless we could back up whatever was written with another source. Therefore, if we cited it, we best have a second footnote.

That said, I still believe it is doing better than it was in the beginning and it does more good than not.

I find wiki to be no worse than newspapers.
Comment
S

Ha. What a terrible app. Can't search in any other language than English. Really basic, simple and ugly. Tested Wikipanion too, not impressed. I've also tested Quickpedia, which I didn't like much either. Atm the best Wikipedia app IMO is Wikiamo, altho it isn't perfect either:

1. Can't customize the languages list (I'd like to have English first, Finnish second as they're pretty much the only ones I use)
2. Doesn't have the "languages" section of the Wikipedia side bar. Very easy to check out more info in English thru there if I'm on a Finnish page, or just check what something is in some other language. I use this loads on the computer. I don't think any Wikipedia iPhone app has this though.

I hope Wikiamo will be developed further to support these. Then it'd be near perfect for me at least.
Comment

Full of lies, I tell you! (clutches Bible)

Seriously though, is it any better than the other Wiki-apps? I've been using Wikipanion and it's been decent, but I always like going with official apps.
Comment
I

i think this app will become one of my "top" apps. it can come in handy often.
Comment
F

seriously: how is this any different from opening Wikipedia in Safari and doing a search?
Comment
I

fredf said:
seriously: how is this any different from opening Wikipedia in Safari and doing a search?
Click to expand...

Wikipedia is not always accurate. It cannot be the one and only final source you use for any important decision or communication.

What source IS always accurate? What source CAN be the one and only final source? There is no such source. You can never turn off your brain. Given that fact of life, Wikipedia is a brilliant project and VERY useful.

1. Wikipanion. I found it failed to find things that WERE on Wikipedia, so I stopped using it a few months ago.

2. WikiTap. It defaulted to a limited cached version of Wikipedia, with some screen space wasted offering to play "relevant" videos. You have to switch manually to "real" Wikipedia each time. So I stopped using that too. (Although the cache would be neat for Touch users away from WiFi, if it works the way I think.)

3. Wikipedia's mobile Web site (which has its own iPhone icon if you bookmark it to the home screen). Works great. Being a Web app it does have a load delay, but LESS than the delay of the "real" app I think. And it supports landscape viewing IIRC.

4. This new REAL app. I haven't used it much yet, but so far it's mixed. "Simple and fast" is the goal, and I like that--but to meet that promise, I'd want it to load straight to a functional search field, and that takes several seconds right now, as the last article you viewed loads (a feature you can't toggle but you can Clear the history).

It's not very polished. Some weird Linuxy-looking text field comes up at first while loading, there's a non-standard loading pinwheel, and the search field has (useless) AutoFill and Prev/Next buttons wasting screen space like a Web form! The search text is very tiny, smaller than normal iPhone input text. And landscape viewing is not supported.

For now, I say just bookmark Wikipedia's iPhone-specific site--it's nice. But this app could get good in time.

I agree re Facebook--but not in this case. Facebook in Safari is slow, but Wikipedia has an iPhone-optimized site that works quite well. It's not slow, and it lacks the rough edges of this new app. This new app is "just OK."
Comment

From what I am reading here, guess I'll just stick with wikiamo.
Comment
C

VenusianSky said:
From what I am reading here, guess I'll just stick with wikiamo.
Click to expand...

I was coming on here to talk about how bad this app is. Guess others have beat me to the punch.

Can't even zoom onto pics. Have to tap to bring them up into a separate window and then, can't even scroll around the pic. No way to even get to the right hand side of a pic.

What a POS of an app for now!
Comment

nagromme said:
Wikipedia has an iPhone-optimized site that works quite well. It's not slow, and it lacks the rough edges of this new app. This new app is "just OK."
Click to expand...

Thanks for typing all of that!

I have been using Wikipanion for almost a year now, and I love it; HOWEVER, more recently I have been noticing that a lot of searches turn up nothing, and then I go to the Wikipedia site in Safari and the topic comes right up when I search for it. Wikipanion has potential, but it seems like it's developers have allowed a critical problem to go unfixed for too long. I am going to give Wikipanion another month, and if they don't fix it, I'm just going to default to the Safari icon, as you suggest. Thank you again for the reviews you typed.
(I already have the Wikipedia Safari bookmark on my homescreen, next to Wikipanion)
Comment

I don't really see much point in that the mobile site via safari seems to do the trick.


Yes Wikipedia is full of conjecture, hearsay and fanaticism. And most of the material that isn't is just copy and pasted from other sources.