Apple has been awarded a patent by the U.S. Patent and Trademark Office (via AppleInsider) detailing a wireless "desk-free" computer system that consists of only a computer housing with a built-in unique smart projector including advanced capabilities.

The patent, which was filed in 2008, details a computer system housing a unique projector with advanced technology that would hold the same power as a desktop or laptop. The smart projector would also allow the "computer" to be set up anywhere, allowing any suitable surface to be used for a display screen. 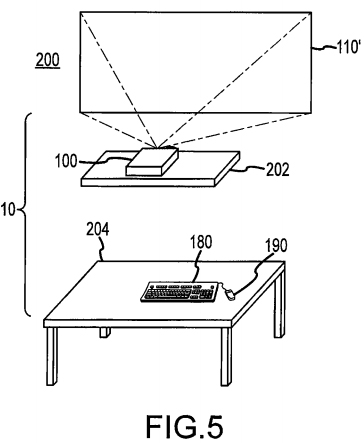 The computer systems and methods described herein may achieve a synergy that is not possible with conventional computers and projectors, which may be realized in terms of the operating system, system interaction, and/or performance. This may stem, for example, from the computer system's knowledge of the computer system's projection output and the surface on which it is projecting. The operating system may be designed to include larger icons and/or text and/or a different style based on the knowledge that the user is likely further away from the displayed image than conventional computer experiences.
Click to expand...

In detail, the projector would also be configurable to run solely for certain purposes, such as turning off all components except the DVD drive and the projector to run as a mobile cinema, or turning off certain components to run like a normal computer. The projector itself would also be able to automatically calibrate and perform keystoning on itself to provide the best picture possible based on sensor data, even going as far to color correct and discard lesser pixels to display a high-resolution image. 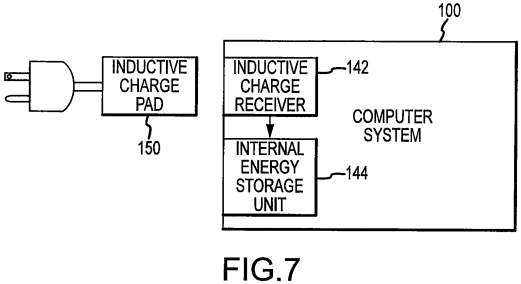 Meanwhile, Apple describes the computer system as also allowing for peripherals such as a wireless mouse or keyboard to be connected, with the device as a whole being powered in a number of potential ways, such as having a single power cord to connect to a power supply or through the inclusion of an inductive wireless charge system or integrated batteries.

It is unknown whether Apple plans to create such a product or not, but the company has researched unique projector technology before. A patent in 2011 revealed the company's interest in developing a pico projector that would be able to take advantage of built-in cameras to automatically recognize and adjust gestures and shadows, which would result in interactive uses for situations such as presentations. Apple also currently includes a section for presentation accessories in its online store, where it sells various projectors from manufacturer Epson.

I like the direction this is heading. It will be interesting to see how this 'could' be applied in the future.
U

Looks like this silly video that crops up on social media every now and then wasn't far off after all... *sigh

Oh good, another patent that will never see the light of day. (I'm going to look like an idiot if this gets announced)

I think there is a pretty good chance you'll look like an idiot a few years down the road...

The projector that just works. How very Apple. Today's projectors (or at least the ones I've tried) are a PITA to set up.
M

A lot changes in technology in 5 years. Example: the relevance of projectors today.
P

So is this actually a new or revolutionary idea, or is it simply like putting a Mac Mini and a projector into one box?
V

I can't see how this is a new thing? As in Didn't samsung do a projector phone before? And when I was at Uni my lecturer had a DVD player built in to his projector (or the other-way round depending on how you look at it!)

The pictures look like my Mac mini setup
M

Actually, most patents never see the light of day in a shipping product.

Heck, I think about 95% of the rumors on this specific website are wrong. So, if you see it posted at MacRumors, the odds are heavily in favor of it being a falsehood.


DShap5 said:
I think there is a pretty good chance you'll look like an idiot a few years down the road...
Click to expand...

Note that this patent was filed in 2008 and no such product materialized in the intervening five years. It is even less likely now to see this on a store shelf. Patents are often filed a couple of years after the initial concept emerges. It is entirely possible that this idea was conceived in 2005-2006.

My own personal guess is that some time in 2006 or 2007, a prototype or two were built. The technology was assessed and the decision was made not to pursue the concept any further. The findings of the experiment were mostly documented in the patent, as well as possible some other concepts that weren't implemented in the prototype.

Of course, we'll never know the true story behind this patent.

Remember, MacRumors is not a news site. It is mostly a technology gossip blog.
Last edited: Dec 17, 2013
C

vmistery said:
I can't see how this is a new thing?
Click to expand...

I guess you'd have to read the patent to see it.

When we see patents, that's always a long long time after someone thought about these things. So this may all have been invented at a time when desktop and laptop computers were a lot more important to Apple. Right now, just plug a projector into an Apple TV.
9

This is what we're all hoping for!
https://www.youtube.com/watch?v=J1YtSeS7VXs


ArtOfWarfare said:
The projector that just works.
Click to expand...

Says who? it doesn't even exist
O

I began to use my smartphone as a computer years ago, and today have a Galaxy Note 3, a Logitech Bluetooth keyboard and a tiny ASUS LED Video Projector. I hook the lot together using the Samsung MHL microUSB cable to pump 1080P video via HDMI into the projector, fire up the keyboard and Bob's your uncle. The keystoning in the projector works a treat. The whole lot take up less space than the smallest MacBook or Windows laptop. Best of all, the 'computer' components (the Snapdragon 800 powered Note 3), fits in my pocket, shoots 4K video, takes 13MP photos and I can talk on it.

(Typing this on my MacBook Pro 15" Retina with 1TB of SSD, because until Adobe port their suite across to Android or the cloud, a Mac still has it's uses! Namely, creating the content that I display on the aforementioned setup.)
M

But this would be nice for Apple TV. Get busy Samsung!

09sroyal said:
Says who? it doesn't even exist
Click to expand...

The projector itself would also be able to automatically calibrate and perform keystoning on itself to provide the best picture possible based on sensor data, even going as far to color correct and discard lesser pixels to display a high-resolution image.
Click to expand...

And of course it doesn't exist. Nothing exists until you've thought up that you should make it exist. That's what a patent is. "I've imagined this thing that I could make, and here's how I could make it and what it could do. Now I'm going to spend a lot of money and time to make it a reality, so please don't let anyone legally steal this idea."

That's the way they're supposed to work, anyways. Patent trolls and companies like Samsung completely screw it up by either aggressively defending patents they have no intents of ever using or violating patents.

Unless it has a very bright projector.

Granted having an all in one Project/Computer is handy, as it is easier to setup an ad-hoc presentation. However, it doesn't look useful for everyday computing which Apple is better known for.

Most likely it is a patent so when HP or Dell makes one, they need to pay Apple for the patent.
N

Who gets to see all of these patent applications when they are sitting around for 5 years? I KNOW we can trust our government implicitly, so surely none of these patents get leaked to other companies over the years.

Very interesting. I suggested this a while ago. Upgrade the AppleTV to include a projector so that you could stream films from your iTunes library via your Mac or iOS device directly to the box and then on to the wall. Bingo you get a 50" TV for a fraction of the price of buying a 50" HD or UHD television. I'm sure the multitude of peripheral and accessory makers would soon come out with fold away screens for you to project on to rather than use the wall.

This would make a lot more sense than trying to build an actual Apple television. If you look at where Apple is doing most of it's business now it's in the sub $1000 market. iPhones, iPads, iPods and iTunes make up the vast majority of Apple's sales and profits.

If they made a television it would have to be top of the range and therefore very expensive. Which means it's never going to be a mass market product. It would be a high end niche product. That is exactly what Apple have been trying to move away from in the past 10 years. So it doesn't make sense to me to go back there in the TV arena.
J

4K Projectors have been hitting the market this year but they're still very expensive. Hopefully the price will come down and they'll be ready for mass market sales next year which would indeed make the perfect AppleTV.