Just got this on Comcast cable internet near downtown Atlanta. I wonder how fast the wifi in the iPad is capable of going?

On my home network 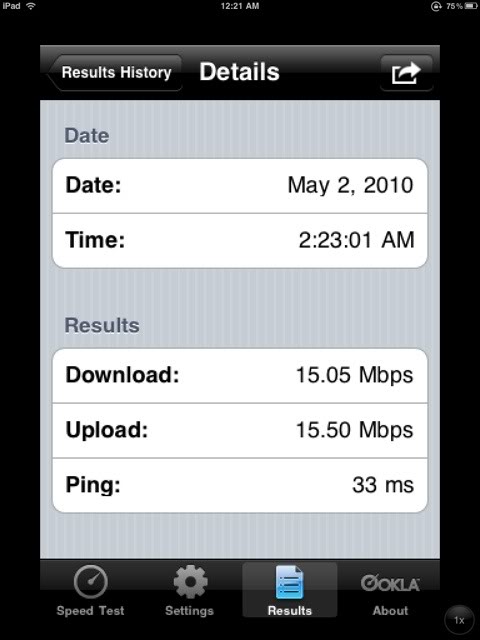 Best I've seen is 23 down. Have 50mb account but it never comes close to that. My laptop will go to right around 50 though.

I don't understand why mine is so cruddy. Any suggestions?

A detialed image for the speed test result can be found here: http://veeapps.com/result/m22Tqw1p8

I need to reconnect my cable amp before I post my speeds.
F

When you use an app like SpeedTest you are as much measuring your ISP's performance as you are your iPad's WiFi speeds. Besides that, ISP performance will usually vary from minute to minute so I'm not certain what value there is in comparing such numbers between users.

If you want to get a more consistent set of results you should measure file transfer performance between your iPad and a Mac/PC. Of course, WiFi performance will vary depending upon your setup (router brand, distance from router, signal noise, frequency band -- 2.4GHz versus 5GHz, security settings, etc. the list goes on and on).

In any case, it might be interesting to see reports on the maximum file transfer speeds over WiFi on the iPad when using 2.4GHz 802.11g and 5GHz 802.11n over short distances (from a few feet, to help eliminate problems caused by noise and intervening walls, etc.). Users should also report their router type/brand and the type of security they have enabled (none, WEP, WPA), and the app/method they used to measure the speed.

For example, using a Belkin Wireless-G router I can transfer a 60MB file from my Mac to the iPad in just over 30 seconds which works out to a rate of 15.8Mbps. That's using GoodReader on the iPad over an 802.11g network with WPA security over a distance of about three feet. After unmounting the connection between the devices (to eliminate caching) and quitting and relaunching GoodReader I can then read back that same 60MB file from my iPad to the Mac in just under 25 seconds or at a rate of 19.5Mbps.

So, the WiFi writing rate (write to iPad from Mac) is about 16Mbps and the reading rate from the iPad is just over 19Mbps.

I'm going to try the same over a 802.11n 5GHz Airport Exreme to see what differences I get.
F

So, I just switched routers and these are the results from a first generation AirPort Extreme-N (100Mb ethernet model) over a 5GHz 802.11N only setup:

rkdiddy said:
I don't understand why mine is so cruddy. Any suggestions?

A detialed image for the speed test result can be found here: http://veeapps.com/result/m22Tqw1p8
Click to expand...

that is rather bad isnt it. wifi or 3g model?

using the same servers from a computer, what are those speeds?

had you considered trying on another wireless channel?
J

........ the limitations arent at the router, they are either from your ISP or the ipad itself. apple has apparently released the firmware upgrade to fix the slowness for their routers.

I'm getting 13970 from my Verizon FIOS - no complaints on the speed here.
F

My previous tests were done on a 32GB iPad 3G. Here (for comparison) are results for a 32GB iPhone 3GS:

To satisfy the OP's request, here are the results on my iPad 3G running the SpeedTest X HD app (RoadRunner cable ISP, SpeedTest server: Dallas, TX, eight trials from the same location as the tests with GoodReader):

*Yes, it was that low, which just shows that when relying upon the ISP or an external server (somewhere else on the internet) your mileage may vary.

You may recall from my earlier report that I measured GoodReader file transfers using the AirPort Extreme at 15Mbps (write file to iPad from Mac, equivalent to an ISP download).
B

I've got 30Mbps connection and the iPad seems fast

That server you are connected to seems to be located in Bulgaria. If so, where are you located and how did you select that server? The server selection in SpeedTest.Net seems to make a pretty big difference (I see variations of almost 2 to 1 between servers and similar variation minute-to-minute on the same server -- which means that any give test can vary rather widely but some servers seem to average much better results).
B

fpnc said:
That server you are connected to seems to be located in Bulgaria. If so, where are you located and how did you select that server? The server selection in SpeedTest.Net seems to make a pretty big difference (I see variations of almost 2:1).
Click to expand...

I'm located in sofia, bulgaria too.

I think this was the default server choosen

I think this was the default server choosen
Click to expand...

Could you try a file transfer test using the free GoodReader Lite app? I've never seen WiFi file transfers over 20Mbps on my iPad so I'm somewhat surprised that you got almost 30Mbps from a server accessed over the internet. Of course, SpeedTest.Net is probably measuring an effective memory-to-memory transfer so that eliminates the file write overhead on the iPad.
F

Yes, you are correct, that is one of Apple's suggestions if you have WiFi problems. In any case, I don't know if you were directing that comment to me (probably not, you just made a general suggestion) but I've already tried turning off the auto brightness and at least in my hands and on my iPad it seemed to make no difference. All of the results I've posted above had the auto brightness turned off.

I should add that I've found the GoodReader file transfer tests very stable, trial to trial I've seen variations that keep within the +/- 5% range (and very often the tests repeat to within a fraction of one percent). However, I can't say the same about the results using SpeedTest X HD or SpeedTest.Net. That's why I don't think those tests are a very reliable measure when comparing from person-to-person or iPad-to-iPad.
S

I have Cox Internet Ultimate 150 Mbps / 20 Mbps and the new AirPort Time Capsule.

rkdiddy said:
I don't understand why mine is so cruddy. Any suggestions?

A detialed image for the speed test result can be found here: http://veeapps.com/result/m22Tqw1p8
Click to expand...

I already posted this in another thread.

I have Verizon FIOS 150Mbps service and a Netgear R7000 router.

schmitt said:
What speed test/app did you use?
Click to expand...

I used the standard oolka speed test app (for iPhone). I had to try a few locations to find one (Optimum Online in NYC) that could do 150Mbps.