Amid continued rumors that Apple intends to release a 13-inch Retina MacBook Pro in the coming months, a Geekbench 2 benchmark submitted late last month as a "MacBookPro10,2" appears to represent the machine in question. 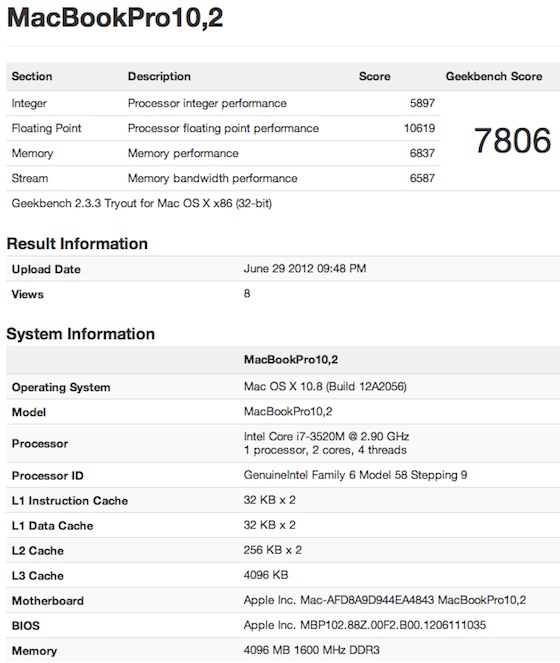 While the machine name of MacBookPro10,2 on the new entry could be faked, other information included in the Geekbench result is consistent with what would be expected on the new machine. The machine is listed as running a 2.9 GHz Intel Core i7-3520M processor, which is offered in the high-end model of the non-Retina 13-inch MacBook Pro. The machine is also listed as running Build 12A2056 of OS X Mountain Lion, with the four-digit build number suffix frequently being used on Apple's custom operating system builds.

In addition, the motherboard identifier of AFD8A9D944EA4843 previously surfaced as a new machine in early builds of OS X Mountain Lion. While many of the other new motherboard identifiers found in Mountain Lion were accounted for with Apple's MacBook Pro and MacBook Air models released last month, the identity of AFD8A9D944EA4843 has remained unknown. Finally, the machine's score of 7806 is on par with results seen for the non-Retina model running the same processor.

One inconsistency, however, is the listing of just 4 GB of RAM on the Geekbench result. The 2.9 GHz Core i7 processor is paired with 8 GB of RAM even on the non-Retina 13-inch MacBook Pro, although prototype machines could have different configurations.

Back in May, similar Geekbench benchmarks for what turned out to be the non-Retina 15-inch MacBook Pro, as well as a revamped iMac, surfaced in the results browser. The revamped iMac has, however, yet to see a public launch.

Maybe the i7 processor will be on the base model along with 4GB of RAM, that way there's a significant speed difference with the MBA. Hopefully the second model could have a quad-core , but I doubt it.
Comment

Would it be that much more powerful than the high end MBA?
Comment
J

it shouldn't be. the 13" is the bigger seller. in the past, there has been speculation that apple purposely waits on updating the 13" solely to drive up sales of the 15". i guess they could have waited a little longer but just because we're seeing benchmarks doesn't mean a release is eminent...just look at the imac benchmarks.
Comment

If the 13" brings a discrete gpu, I will be left in quite a debacle. I love the 13", but I don't want Intel's crap graphics.
Comment
A

Enough with the laptops already. How about a new iMac Apple?
Comment

Wasn't there another benchmark for the 15" MBP that had a base 4GB while the shipping product had 8GB ?

It could be Apple is testing these with one stick of RAM in them.
Comment

Assuming Apple keeps the same pricing model as the 15", $1499 for the base price rMBP 13" is well a decent price IMO. Not sure if 4gb of DDR will cut it though.

I strongly believe September is going to be a month that a lot of things are released from Apple. If any of you have noticed (most likely anyone with Apple stock), Apple has been releasing things lately in the last 2-3 weeks of each fiscal quarter. This makes a ton of sense because all of the intial huge lump of sales will fill that fiscal quarter with revenue, while the quarter including the next three months collects all of the sales as the new product planes out as far as sales. I find it highly unlikely that Cook will wait until after the end of this quaurter (July/Aug/Sept) to relase things like the new macbook, new iMac, iPhone 5, etc. The 3rd calendar quarter earnings would take a severe drop and Cook knows better than to let that happen.
Comment
G

RoelJuun said:
There are going to be a lot of pissed off people that just bought the 13" MBP
Click to expand...

Did somebody actually buy the 13" Pro at this refresh? It was underwhelming to say the least.
(Written as a 13" Pro owner)
Comment

gpat said:
Did somebody actually buy the 13" Pro at this refresh? It was underwhelming to say the least.
(Written as a 13" Pro owner)
Click to expand...

The identifier was found in earlier builds of ML, it's the one at the bottom of the list here - https://forums.macrumors.com/threads/1386254/

Note only iGPU, no dedicated graphics card just as the rumours say.

Apple obviously believes the Intel 4000 can support the retina display just fine, the 15 inch retina pro is running on only the Intel 4000 most of the time. Graphic intensive applications won't run great but the 13 inch has never been for that.
Comment
8

I'd be happy if Apple just put the 13" Air screen in the 13" Pro. And I think driving a Retina Display might be asking too much of the HD4000 graphics.
Comment

I can't wait! Hopefully the graphics of the computer will be able to handle that screen resolution.
Comment
M

I'd much rather have a Haswell retina MBA 13'. If Apple decide to release a retina MBP 13', I'm afraid they will deliberately cripple some core features in the MBA 13''. IMO MPA 13'' is a brilliant form factor, and when the next generation Intel IGP/CPU is released it will be a (even more) very capable machine.
Comment

why? it can power external monitors and the built in just fine
Comment
S

I would still get the 13" MBA if it had a dedicated graphics card since it is cheaper, lighter, and powerful enough for most tasks. For people that need a good graphics card for some gaming and more power, retina MBP is the way to go. :/
Comment
S

RoelJuun said:
There are going to be a lot of pissed off people that just bought the 13" MBP
Click to expand...

the price difference will probably quench the rage.
Comment

You're going to think, "Bring it on!" when that squirrely 256gb SSD ain't big enough and you can't go inside to upgrade it. Not to mention the RAM that will be soldered on the motherboard.