Mobile developer Handheld Games Corp reported to TouchArcade.com that performance of their 3D TouchSports Tennis game [App Store, $4.99] is noticeably different between models of iPhones and iPod touches. Their 3D tennis game (video) seems to particularly challenge the 3D hardware on the iPhone and iPod touch. 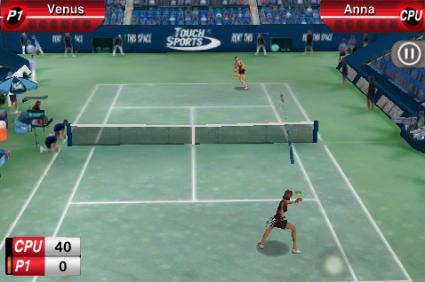 hmmm, never would have expected this...
O

I remember how surprised I was when I first played with a 3G iPhone - The performance felt noticeably faster (with firmware 2.1) compared to my first gen iPhone.

rockinrocker said:
hmmm, never would have expected this...
Click to expand...

i didn't expect such an extreme boost from 412MHz to 523Mhz, but a bump was expected seeing as how the very first 2nd gen. iPod Touch commercial was focused on gaming. Apple thinks it can take a chuck out of the PSP and DS market. We'll see next year.

Interesting this is posted and discovered this late after the release of these devices. I have had both Touch models, and thought I had noticed a bit of faster performance from the G2 over the G1. The G2 didn't seem to stutter as much when switching from portrait to landscape mode in Safari, iTunes, and swipes album with a bit more of a fluid (smooth) transition.

Well the clock speed differences Apple could really stabilize by releasing a firmware update that upclocks the slower models to 532MHz. I believe the PSP's CPU was similarly downclocked at launch, but a later firmware allowed it to upclock on demand. Apple should do something similar since they always claim the advantage of their platform is consistently between all the models.

I wonder if the GPU has similarly seen a clock speed boost.
M

Could be more available RAM on the iPod (per application) as well.

I have noticed that the iPhone appears to allow apps less RAM to run in, probably because it has more background tasks running than the iPod.

I'm just wondering what significant performance boosts the next gen iPhone and iPod touch will have. Such boosts will make it clear if the product will become a full-fledged PDA (or even a mini-laptop), or just remain a small entertainment device. We really don't have enough to go on with just 2 models in each lineup.

When can we expect all the 3G iPhone users to start complaining?

Just goes to show Apple considers the iPod Touch a gaming platform and the iPhone a phone that can do games.
A

oh yeah! something for us 2G iPod touch owners to brag about

i kinda always suspected this cos my sister's 1G iPhone was always a bit laggy in comparison.
T

slu said:
When can we expect all the 3G iPhone users to start complaining?
Click to expand...

And then all iPod Touch users will complain when they have to pay for the 3.0 update.

Interesting... i guess they're really optimizing the touch for games? I'm seeing quite a few iPod touch adverts on the TV lately, highlighting its game features.
C

This screws up everyone.
Developers need to develop and test for different devices. Customer doesn't know how well the game is supposed to run on their device.
This is why Xbox and PS doesn't speed bump with hardware revisions, but they make it cooler, quieter, slimmer etc, so everyone can have the same game experience.
P

and if apple bumped the speed of the iphone via software today, it would take about 10 seconds for the whiners to complain that their battery life is dropping.

BTW, 2.2 kicks butt in the battery dept. It REALLY improves it on mine at least. Very noticeable.

I was pretty sure everything was faster than my iPod Touch 1st gen, because it's lagging really bad sometimes ...

Yeah, that's quite a boost

I'm planning on getting possibily the iPhone v4 which should be out in like 8 months.. I'll need a better job next summer
A

Apple just underclocked the iPhone 3G for battery reason. They could release a firmware later to upclock it.

As a matter of fact, after 2.2 my iPhone 3G felt a lot smoother, quicker overall and I don't know whether this has to do software improvement or hardware. Maybe a little of both.

I've heard the iPhone CPU is capable of running at least 620 mhz.
I

Considering that the processors in both the iPhone and iPod Touch are downclocked from the optimal 600 MHz to save battery life, Apple has some room to grow as far as expanding the hardware capabilities of at least the processor.

Keep in mind that like we typically see in Macs with varying processor speeds, graphics performance can vary ever so slightly as well. If Apple chooses to boost us all to a higher clock speed in future firmware updates, it is likely we will see faster graphics as well.

I can't help but think that in the future it won't be so simple to buy apps - some will run on some phones/pods but not others.

There you go iPod touch users who bitch and whine and complain every time a software upgrade comes out and they have to pay a little extra for it compared to iPhone owners.... you finally have an "up" on us.

This probably isn't good enough for the babies anyways......

Peace said:
Just goes to show Apple considers the iPod Touch a gaming platform and the iPhone a phone that can do games.
Click to expand...

Be nice if games had requirements though, like certain 3D intensive games couldn't be played on the older iPod touchs/iPhones, rather than let the people who originally bought them have crap performance...

Before I get spammed, I have a EDGE iPhone, and I'd rather be able to play small games well than big ones poorly... It's all about quality not quantity.

It's battery life, plain and simple. The iPhone is pushed a lot harder because of all the network communication it has to constantly do.

Basically, the Touch could spare some bateerry life and the iPhone can't.

What rubbish. My 1st Generation touch hasn't had any problems, ever.

The fault is on the developers. People don't want to be woo'd by graphics. If anything is to be mass market, they need to concentrate on gameplay, plot and accessibility.

Chrysaor said:
This screws up everyone.
Developers need to develop and test for different devices. Customer doesn't know how well the game is supposed to run on their device.
This is why Xbox and PS doesn't speed bump with hardware revisions, but they make it cooler, quieter, slimmer etc, so everyone can have the same game experience.
Click to expand...

Besides which I'd expect this. Isn't the iPhone also busy maintaining a network connection even with another application running? I'd think the iPod touch has more free cycles than the iPhone, more available RAM and with faster processor speed, it should be significantly faster.

Can't wait for the first game to come out that says "2nd Generation iPod Touch only" to be released. Then we'll see some debate.
I

Some of you say that the iphone has this or that running in the background therefore lagging performance down. Would you be speaking of the radios? 3G, Edge, Wifi?

Maybe there would be a way for them to allow the same boost in speed as the touch if you were to switch to "airplane" mode with all the background radio noise off.

Basically with the radio's off you have a touch correct?

So in this case apple could just simply say. Hey, if you want touch speeds, then make it so if you wish!