Changing an earlier prediction that surprise announcements would not occur, a Wall Street analyst released a second note Tuesday suggesting an Apple TV upgrade could debut at next week's event.

Though he said in an earlier statement that he believed an appearance by Steve Jobs would be the biggest news out of the iPod-centric event, Piper Jaffray analyst Gene Munster has now said he has reason to believe there will be an Apple TV-related announcement next Wednesday. He noted that Apple's online store has a wait time of one to two weeks for the 40GB model at $229. Munster said he has never seen a delay for the Apple TV since it debuted in March of 2007. The analyst suggests that Apple is either phasing out the 40GB model, as the 160GB offering is still available, or is selling its remaining inventory before a new product launches.

"We believe the company is most likely phasing out the 40GB model and possibly reducing the price of the 160GB model," he said, "but a new model is possible given the hardware has been the same for 2+ years."

Munster does not believe that a major upgrade to the Apple TV will happen next week because he expects such an announcement to coincide with a subscription service that would need to be negotiated with content providers. Weeks ago, Munster reiterated his belief that Apple is working towards a new Apple TV with iTunes show subscriptions and possibly DVR capabilities.

"It is unlikely that negotiations for new content are finished," he said.

But given the age of the Apple TV hardware, Munster said he wouldn't rule out a new lineup as a "wildcard" announcement at the media-centric event.

Munster went on to re-state his belief that Apple will launch a full-fledged television set in two to five years. Such a device, he said, would have DVR and home media functionality built in, and would sync content with Macs, iPhones and iPods wirelessly. He said an Apple television could also play games, with an iPhone or iPod touch acting as the wireless controller.
Click to expand...

I don't think Munster's claims about an Apple-branded TV Set can be accurate in any way. We all know Apple primarily makes their money off hardware sales (They have said many times that utilities such as the Music, Video and App Stores are all to promote their hardware).

Most Apple customers tend to upgrade fairly regularly, be it every year, or every two to three years. Very, VERY few people would consider upgrading a full television set that often.

That said, I think it's fairly likely that the

TV will be updated at this event. Munster is right in point out that the hardware is over two years old. 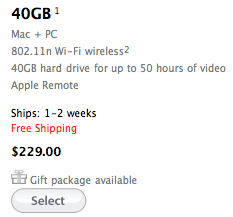 The Loop reports on a new research report from Piper Jaffray analyst Gene Munster noting that the shipping window on Apple's 40 GB Apple TV has slipped to 1-2 weeks. Coming just eight days before Apple's media event expected to focus on music and iTunes-related content, the change leads Munster to speculate that Apple may be making a change to its Apple TV lineup next week.

Munster is basing his opinion partially on the fact that Apple's online store shows a 1-2 week delivery time for the Apple TV, which he said he finds "puzzling ahead of next week's event."

Munster feels that Apple may phase out the 40GB model and lower the price of the 160GB model to make room in the product category. "A new model is possible given the hardware has been the same for 2+ years," said Munster.
Click to expand...

Munster has issued several research reports in recent weeks suggesting that Apple is likely working to launch additional iTunes Store video content, possibly alongside an Apple TV revamp, and may even be pursuing an Apple television set.

I agree with you regarding how unlikely it is that Apple would enter the TV business, but for a very different reason- margins. With Apple being a fat margins hungry company, it seems unlikely they would look around at such a low-margin business and decide to enter that space. Could they make a great TV? Sure. Could they make a great TV that somehow justifies typical Apple margins vs. well-established competitors? Seems unlikely.

However, IF this was true, the new hardware replacement issue might not really apply. Once we get new

TV hardware, and assuming it covers key issues like being able to play back full 1080p, it's not like the television resolution standards are going to change for many years to come. So, put the right hardware platform together, and you could refresh it with software for well into the future and still keep it fully relevant.

With computers, it is easy to argue that some markets will never get enough chip speed, or now cores. New Macs can make sense to even more than the cutting-edge people every few years.

TV platform- whether built into a TV case or as a stand alone box- that includes 1080p playback at full bandwith- would probably have some very long-term (hardware) legs and still be very relevant.

It would be something if they came out and said it'll do 1080p at 24 FPS on the current hardware. However, I'm just hoping for 720p at 30 FPS and a better menu system (the "My Movies vs. Shared Movies" battle, etc). It would be nice if it also supported some live streaming features (maybe via YouTube XL or Last FM). The icing on the cake would be cloud storage for iTunes purchases and some type of TV and movie rental/subscription service.

They did mention at WWDC that Snow Leopard's primary purpose was to unify the Mac, iPhone, iPod and Apple TV platforms. Maybe we'll get a foundation update that brings the Apple TV's foundation from 10.4 to 10.6.

Someone is in major trouble.
S

Give us a 1TB and 2TB models please in the form of an iTunes server that hooks to the TV. 40GB model is just ridiculous with today's HD content and the general size of people's libraries.

Are we finally going to see Apple transition the Apple TV from a "hobby" to an actual proud product with some huge innovation?

I've been holding out for an Apple TV revision for ages!
G

Bring on a new Apple TV with...

- 1080p/i movies from the iTunes store
- 1080p support with a solid bitrate for 3rd party content (even if still limited to a few codecs)
- Internet browsing support out of the box
- Built in HDTV Tuner with PVR capabilities.

and on the list of would be nice as well: SATA hard drive support making it possible to go 500GB or larger in the future.

Who needs 40GB when you can stream everything from your computer (or in my case, my 4TB NAS)?

support for external drives so I can do it locally without having to turn my Mac on and expand my library storage as I wish.

Shipping time is the same in the UK Store. 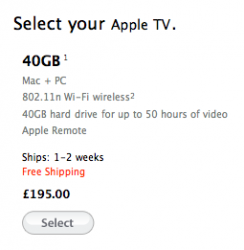 It's just a pity the price isn't.

I can see an update or a discontinuation, never using the device I cant really think of anything they could add that would require hardware changes except more storage, you know it wont have blue ray

only the 40GB, keeping the 160GB points towards a storage bump and not much else?

A hardware update must be ready - something with one or two of the iphone 3GS chips to get 1080p going whilst still being low power. However, will they wait until the software and licences are in place - Apple are doing well in "being nice" to its customers - Apple TV2 was a free upgrade for v1 owners and Snow Leopard was a cheap update - I'm sure they'd get some nice headlines if they released new hardware with an interim software update and then gave the 4.0 software for free early next year. If the rest of the event is underwhelming (ie only capacity bumps and cameras on ipods) Apple may look to the ATV to inject something unexpected and surprising. Or it may simply be that the supply of 40 Gb IDE drives is finally drying up.

thegoldenmackid said:
Someone is in major trouble.
Click to expand...

Like the "premature specification" screw up (WWDC '03, PowerMac G5).

I want it to be fully networkable, i.e. I can get recordings anywhere in the house.

I want a complete redesign of the software. The current Front Row-based stuff is crap.

And it needs to cost no more than what it does now.

That's about it. I'll let you know if there's anything else .

I'm hoping that us early adopters get the 3.0 update Free
Z

They better do more than a simple storage bump. The internals need to be completely upgraded.

I really am expecting a new Apple TV next week, and this is the first time in 3 years that it actually seems like it will get some attention.

If I get any of the first three, I will be happy.
R

easy4lif said:
I'm hoping that us early adopters get the 3.0 update Free
Click to expand...

why do early adopters always think they're something special?

Potentially, this event is turning out to be quite huge!

This is more fun than waiting for MacWorld and WWDC.

Kilamite said:
Give us a 1TB and 2TB models please in the form of an iTunes server that hooks to the TV...
Click to expand...

That's what I'm talking about.

I really can't see this happening. There is no such thing as *an* HDTV tuner. Each different region is going to need different tuners and TV listings, and in most cases there'll be no support for cable or satellite.

A recorder can still work in that it'd just take an HDMI in, and record the signal, however the experience would be far from what most users expect when they hear 'P/DVR' so Apple are highly unlikely to do it.

Frankly, the crucial short-coming of the AppleTV (1080p aside) is really in the iTunes model, and the Airport Extreme. AppleTVs would be left more or less as they are if AEBS could also function as an iTunes server.

It'd be trivial to hang a large drive off the back of an AEBS and use it to drive a whole house full of AirTunes devices and AppleTVs. The average household could have whole-house audio, and three TVs all with access to a complete media library. Throw in a couple of Touches serving as remotes, and you have a very slick set up for under 2K.
M