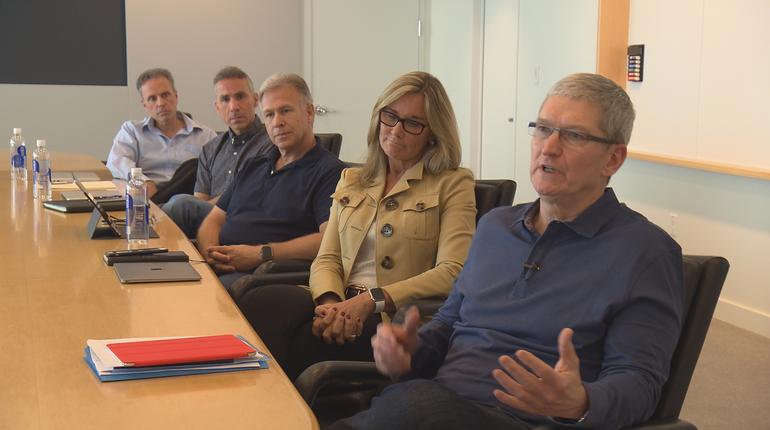 ​
Watch "Inside Apple, Part One" (Image: CBS)​
Apple CEO Tim Cook discussed a wide range of topics with Rose, starting with the legacy of co-founder Steve Jobs. "This is Steve's company," said Cook. "This is still Steve's company. It was born that way, it's still that way. And so his spirit I think will always be the DNA of this company."

Rose then accompanied Apple design chief Jony Ive for a rare look inside Apple's secretive design studio, where a team of 22 designers work on the future of Apple products. Apple covered many of the desks to ensure Rose could not see what the company is working on next.

Ive explained how he prototyped the Apple Watch, beginning with a sketch of the watch casing transformed into a 3-dimensional electronic blueprint sent to a high-precision CNC machine for milling. The watch casing is then sanded and polished by hand by veteran craftsmen at Apple. 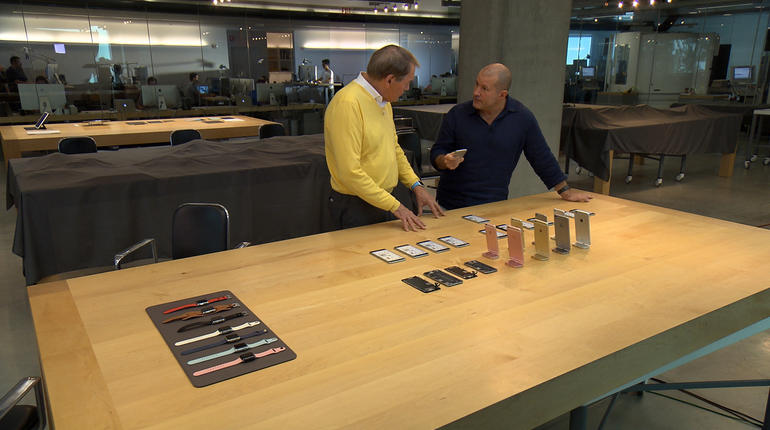 Rose and Ive inside Apple's secretive design studio (Image: CBS)​
The design chief also reflected on the complex engineering process that was required to create Apple's new 12-inch MacBook, including working with Apple's head of hardware engineering Dan Riccio to create the custom-shaped terraced battery that fits inside the notebook's ultra-thin enclosure.

The segment revealed that Apple senior director Graham Townsend leads a team of 800 engineers and specialists working on the iPhone's camera. Townsend showed Rose a micro suspension system that stabilizes the camera when its owner's hand shakes, and explained how Apple engineers calibrate the camera.

Can't wait until interviews are granted inside the (finished) spaceship campus! ;0)
Reactions: satcomer, ex0dus1985, Max(IT) and 4 others

Now Samsung can one-up them by using 801 engineers on their camera.
Reactions: DancingTiger01, TheAppleFairy, bwillwall and 28 others

The things under those black cloths are Apple Cars. Damn, they made it really thin!
Reactions: satcomer, DancingTiger01, BrotherJerome and 23 others
T

I guess the polishing manually by veteran craftsmen must be good..... no time for coffee breaks i guess.

"This is still Steve's company. It was born that way, it's still that way. And so his spirit I think will always be the DNA of this company."
​
No, because we would have heard about Steve's head exploding at some of the screwups that have happened in the past few years.

I'm starting to wonder how bad it is using Windows, or jail breaking. Given that the first time I jail broke an iPhone, I bricked it, that says a bit about the frustration...
Reactions: btrach144, Benjamin Frost, H2SO4 and 7 others
T

good stabilization system when user gets the shakes with their iphone's camera.
Reactions: johnnygee
M

Is Angela Ahrendts sleeping in the photo? And where is her SmartWater??
Reactions: Apple Human and djbuddha

Can we get a link to the full video?

snebes said:
Is Angela Ahrendts sleeping in the photo? And where is her SmartWater??
Click to expand...

She's dreaming up the next new way to get new

products, because the launch of the

Watch was so successful, compared with the other launches.
Reactions: NMBob

The best part were the Apple hard hats.
Reactions: Jamalien, ex0dus1985, ZebraDude and 2 others
T

jmh600cbr said:
Can we get a link to the full video?
Click to expand...

Thanks for the commercial 60min, I just bought an 3 iPads and 5 watches ...
Reactions: DancingTiger01

This. Very much this. I'm typing this on a Macbook, there's an iPad on the table, an iPhone in my pocket, and an Apple Watch on my wrist. They each are indispensable to me. Why? They work. There's the minimum possible friction between me and what I'm trying to get done.
Reactions: StyxMaker, ex0dus1985, Spendlove and 22 others

Speculation on what's under the cloths then? What's missing? What's normally on those middle tables?

I bet you that on those tables covered with cloths there are people's mugs and hats just in case Samsung manages to copy a rough shape of what's underneath.

Technically this is quite an unfortunate quote, because you could misread it as "you just need an iPhone really, skip all our other products".
Reactions: Jamalien, yanki01, Benjamin Frost and 5 others
D

Wow there it is, the new Macbook Pro!

That photo explains why apple products are no longer available at launch in the stores; she's asleep at the switch.
Reactions: Benjamin Frost and polee
T

And all the Apple fans wave and start singing Hallelujah ..

Love the picture. It is the only meeting in the world where everyone in attendance has an Apple Watch.
Reactions: Fancuku, Benjamin Frost, MaximizedAction and 1 other person
F

Anyone notice some of the shots were done with an iPhone? When they were talking about the camera you can see a guy taking video with an iPhone then it switches to his angle.

Zirel said:
The best part were the Apple hard hats.
Click to expand...

Yes! I wish we would have gotten more footage from Campus 2. Much more interesting than talk about taxes and Chinese manufacturing. 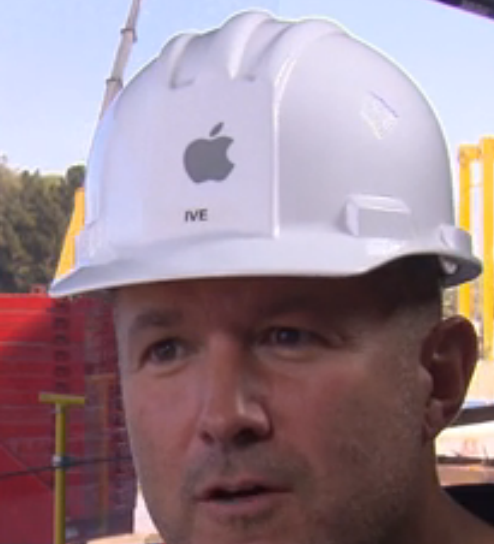 I wonder what Apple is trying to achieve by offering this look behind the curtains. Don't get me wrong, it's interesting stuff, I just don't understand their motivation for taking the initiative in doing this. It's not like they need to grab the extra attention to boost christmas sales.
Reactions: Lockett, Benjamin Frost, CJM and 3 others

If you follow Apple like we do here, you will not learn anything new about the company from this interview. It was interesting though to hear about the tax code requiring 40%, the amount of business done outside the US, growth of the Chinese middle class and the lack of skilled labor in the US to perform this work. (although denied, labor cost is part of this as well) All of these things could change over time.
Reactions: thermodynamic
You must log in or register to reply here.
Share:
Facebook Twitter Reddit Email Share Link
Register on MacRumors! This sidebar will go away, and you'll see fewer ads.
Sign Up
Top Bottom