Industrial designer Don Lehman takes a look at the iPhone casing leaks that have surfaced so far, analyzing in great detail how Apple appears to have refined its iPhone with a new unibody design that should make the device stronger, lighter, and thinner than previous models.

In looking at the probable antenna design of the next-generation iPhone, Lehman notes how the antenna design evolved between the GSM iPhone 4 and the CDMA iPhone 4, the latter of which then carried over to the iPhone 4S. Following the "Antennagate" controversy with the original iPhone 4, Apple redesigned the antenna system in order to push the antennas to the top and bottom portions of the stainless steel band wrapping around the device, leaving the portions along the two long sides as structural and decorative pieces.

Lehman believes that Apple is using a similar principle for the next-generation iPhone, but has made the move to a "unibody" design in which the long side pieces and the large central section of the rear shell are machined from a single piece. The texture seen on the inside of the shell in leaked photos are in fact the tool marking showing how Apple machined the part out of a single block of metal.

The same properties that unibody designs give to Apple's laptops apply to this design as well: stronger, lighter, and thinner. You can see from this picture the tool path of the CNC machine that made the unibody backplate of this design. The tool path sort of looks like the lines that are made when a farmer plows a field. This started out as a single block of metal and the CNC carved that metal out until you have what you see here.
Click to expand... 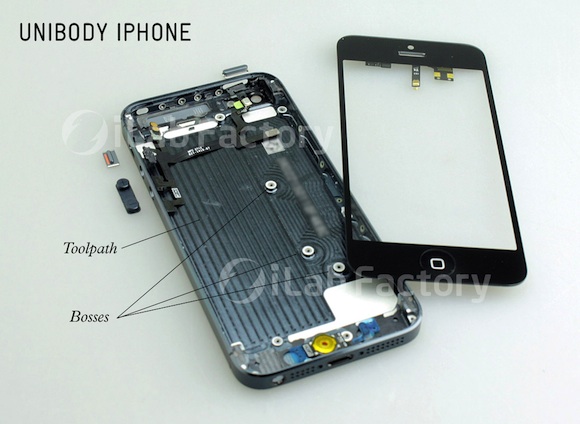 Lehman notes that even the bosses where screws for other components will attach are machined out of the single rear shell piece, increasing strength while reducing thickness and weight.

While Apple would certainly prefer to build the entire rear shell out of a single piece of metal, the realities of signal transmission mean that the company needs to use more transparent materials in locations where the antennas are. With the iPhone needing to send and receive Wi-Fi, cellular, GPS, Bluetooth, and perhaps NFC signals, Apple has pushed those hardware functions to the top and bottom of the device where they are the least shielded by other device components and the user's hand. Accommodating those functions has led Apple to adopt its new strategy of using a high-quality, thin metal shell wherever possible on the back of the device to increase strength and decrease size and weight while using glass or plastic windows for the antennas. 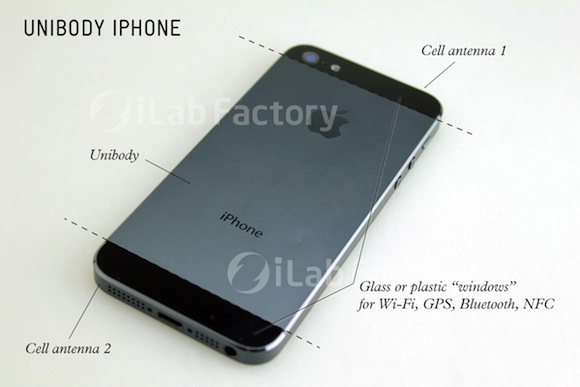 Lehman wraps up his post by addressing several other design aspects of the next-generation iPhone shell, including an examination of Apple's tinting of the metal on the black version of the device and placement of the rear camera with respect to the device design, as well as giving an overview of some of the other changes Apple has made for the forthcoming device.

man, that iPhone looks great! I am going to be first in line to buy one!
Comment

Personally, I'm hoping for a black finish more like this: 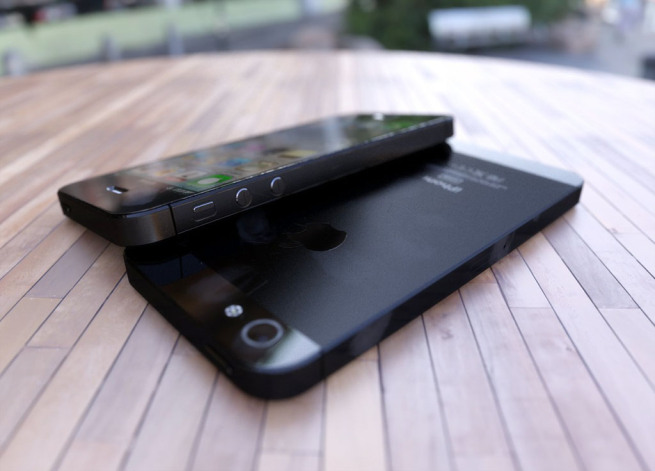 Gil Amelio would never have let this happen.
Comment
B

nope still not a believer..

Glad someone has done a real analysis of this. As soon as the first leaked parts showed those CNC tool markings for the unibody portion I knew that this was at the least a real Apple prototype.

It makes a lot of sense to move in this direction. It looks like instead of the iPhone 4/4S design where the backplate is the first piece to come off in disassembly and the screen is the last piece, that this design will have the screen come off first. That should make repairing damaged screens much faster and easier for Apple and third parties.

Unlike the 4/4S design there probably won't be an internal structural support layer in the middle of the phone. Rather the logic board and battery will mount to the unibody plate and the screen will go on top. Fewer layers means a thinner phone with more room for battery.
Comment
U

Every single iPhone after the first has been an evolution....by definition.

room237 said:
Yet, the battery still sucks
Click to expand...

That's right, the not released battery for the not yet released phone sucks.
Comment

These leaks are actually good for Apple. Our eyes get so used to it by the time; we start to actually like it way before it gets released.
Comment
R

basesloaded190 said:
That's right, the not released battery for the not yet released phone sucks.
Click to expand...

Change for the sake of change is stupid. This looks like an excellent improvement over the current design.
Comment

Cool, so what else can you tell us with 100% certainty about the next iPhone because you seem to know nothing but facts over there.
Comment

AMG63 said:
Personally, I'm hoping for a black finish more like this:

If the electronics use less power and the battery remains the same you will get better life out of it. Simply saying OMG THE BATTERY IS ONLY SLIGHTLY BIGGER!!! Means nearly nothing. Yes the screen is getting bigger but the type of screen they are using requires significantly less power. The processors have also adapted to use less power.