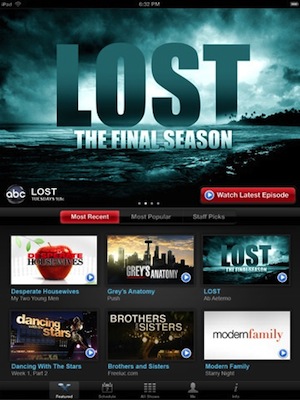 The Wall Street Journal takes a look at ABC's application for the iPad ten days after the device's launch, revealing that users have streamed at least part of 650,000 television episodes in what the network deems a very successful launch.

The network said that in the 10 days since the iPad's debut, its TV-show watching app has been downloaded 205,000 times, giving the Walt Disney Co. unit a presence on nearly half the 450,000 devices that Apple says it has sold. Moreover, users have watched at least part of 650,000 television episodes using the app, generating "several million" ad impressions, according to an ABC spokesman, although the precise number is still being calculated.
Click to expand...

The report notes that ABC has been offering on the iPad the same traditional 30-second ads from a host of advertisers that are seen by television audiences. By fall, however, ABC plans to roll out special interactive ads for users of its iPad application. Additional plans involve allowing local affiliates to offer targeted advertising to users based on their location.

Also provided in the report is an interesting look at the development of ABC's iPad application, which was undertaken by a team of twelve ABC engineers. Development is reported as having occurred "in the five weeks between the Jan. 27 announcement of the iPad and its commercial release on Saturday" despite that fact that that time interval was over nine weeks in length. And somewhat surprisingly given Apple CEO Steve Jobs' position as the largest individual shareholder of ABC parent company Disney, ABC's engineers were not provided with a pre-release iPad for development purposes and had to rely on the simulator included in Apple's development tools for the platform in order to build the application.

Application developers have been able to ride along with strong sales of the iPad, with Apple today announcing that strong U.S. sales of over 500,000 already have forced the company to push back international launch by one month to late May as it struggles to keep up with demand.

Huge. Things are rolling along very nicely for the iPad.
Comment

But does it have legs?

Admittedly good numbers, but you'd expect that for a new device. Interesting to see what the numbers will be in a month or two.
Comment

I have been watching the Jamie Oliver ABC series on my iPad and have thoroughly enjoyed the experience. Most definitely would love to have more content available. The only downside to this scenario is that i find my self with the TV on (news) and my laptop and iPhone all within reach and sight-i fear my brain will shut down from over stimulation some day...
Comment

Yes please. I'd also like to see Comedy Central and the Cartoon Network. And Hulu.....


Waterboy4 said:
Admittedly good numbers, but you'd expect that for a new device. Interesting to see what the numbers will be in a month or two.
Click to expand...

As long as they stay on top of their app, I think it will continue to be popular.
Comment

I like the app, despite the forced ads that come with the territory. I've used it to watch shows, and I intend to continue doing so.

If we could just get the studios and networks to release their shows in a similar manner, we'd have a world of choices that could be obtained a) free with ads; or b) at reasonable cost without ads.
Comment
I

Love the ABC app, however it does crash a couple of times. But I'm sure they will fix that. Hopefully, other broadcasters get an app, like fox. iPad is perfect for watching tv in bed without disturbing the wife. Also great for people who have kids, as my 65inch LCD is always running Dora or Micky Mouse. ABC app is definitely better than the Netflix in terms of UI.

Also, these apps are great when connected to the internet, but when on a plane or not reach of wifi, wish these apps had a cache mode that lets you view the content offline.
Comment
C

Welcome to the future of television where cable TV networks as we know it cease to exist. Eventually, networks like the big four will be nothing but search engines streaming video per event. One more order of magnitude in bandwidth per household and here we go!
Comment
B

Waterboy4 said:
Admittedly good numbers, but you'd expect that for a new device. Interesting to see what the numbers will be in a month or two.
Click to expand...

Much lower ... because the tv season will be over
Comment

ABC app has potential, and has a lot of room for improvements. Such as rewind, and saving video viewing state.
Comment

bergmef said:
Much lower ... because the tv season will be over
Click to expand...

Unless they make entire seasons available to watch. That would be a good way to bring new viewers to their shows.....
Comment
B

ipadking said:
Also, these apps are great when connected to the internet, but when on a plane or not reach of wifi, wish these apps had a cache mode that lets you view the content offline.
Click to expand...

Which brings you back to an itunes subscription, load what you want to watch .... maybe one day.
Comment
F

This app is great! Video and sound quality are both really high. Streaming is quick to buffer. The App itself is quick to launch and the interface is really nice.

They basically nailed it.

My only gripe (because of course I have to have one) is that they need to put ALL back episodes of shows in the app. There are a few of the first Modern Family episodes that I missed... but I can't get to them through the app.
Comment
B

I hope this shows every TV network they should have their own apps.

Once OS 4.0 comes out with folders, I can imagine having just a folder called 'TV" on my ipad, and in it will be apps from each of the major networks and probably some of the cable networks too. Then you could channel surf on your ipad, just in a totally different way than one is used to.
Comment
D

This is what the Apple TV needs to take off. I so wish ABC, NBC, CBS could write apps for the Apple TV that allowed them to stream content in this manner.
Comment

I'm curious; if you watch a video on the ABC app, can you use TV-out cables to play them on a TV from the iPad?
Comment
Y

GFLPraxis said:
I'm curious; if you watch a video on the ABC app, can you use TV-out cables to play them on a TV from the iPad?
Click to expand...

I believe it is possible but the app itself would need to support it.
Comment
D

I would gladly pay $1 to own episode in high def, but all these networks have somehow convinced themselves it makes more sense to charge $3 per high def episode when very few people are willing to pay that, and show me ads on apps like the ABC one even though they're not even coming close to making as much from that.
Comment

It'd be nice to have more bandwidth for streaming but my DVR tends to take care of this for me.

The only channels I want on cable is the Discovery collection of networks....

PLEASE Discovery - get on my iPad!!!! Cable is just too expensive.

dscuber9000 said:
NBC! Are you watching? Please let me stream The Office like this!
Click to expand...

On a related note to this:
If the latest releases from USA on Demand, via FIOS, are any indication, watch out. In Plain Sight season 3 started appearing On Demand, and the ep was flooded with commercials, going almost 1:1 with content near the end.

It may have been a glitch, but if this is any indication of NBC Universal's policy for this type of content delivery, the convenience of the iPad won't make up for the commercial bombardment.