After 1TB iPhone 13 Pro, Rumor Says iPhone 14 to Feature Up to 2TB Of Storage

We're still a year away from ever seeing the iPhone 14 and not even a month since the iPhone 13. Despite that, the rumors are already floating on what Apple has planned for next year. The latest rumor suggests that for the iPhone 14, Apple plans to include a whopping 2TB storage option. 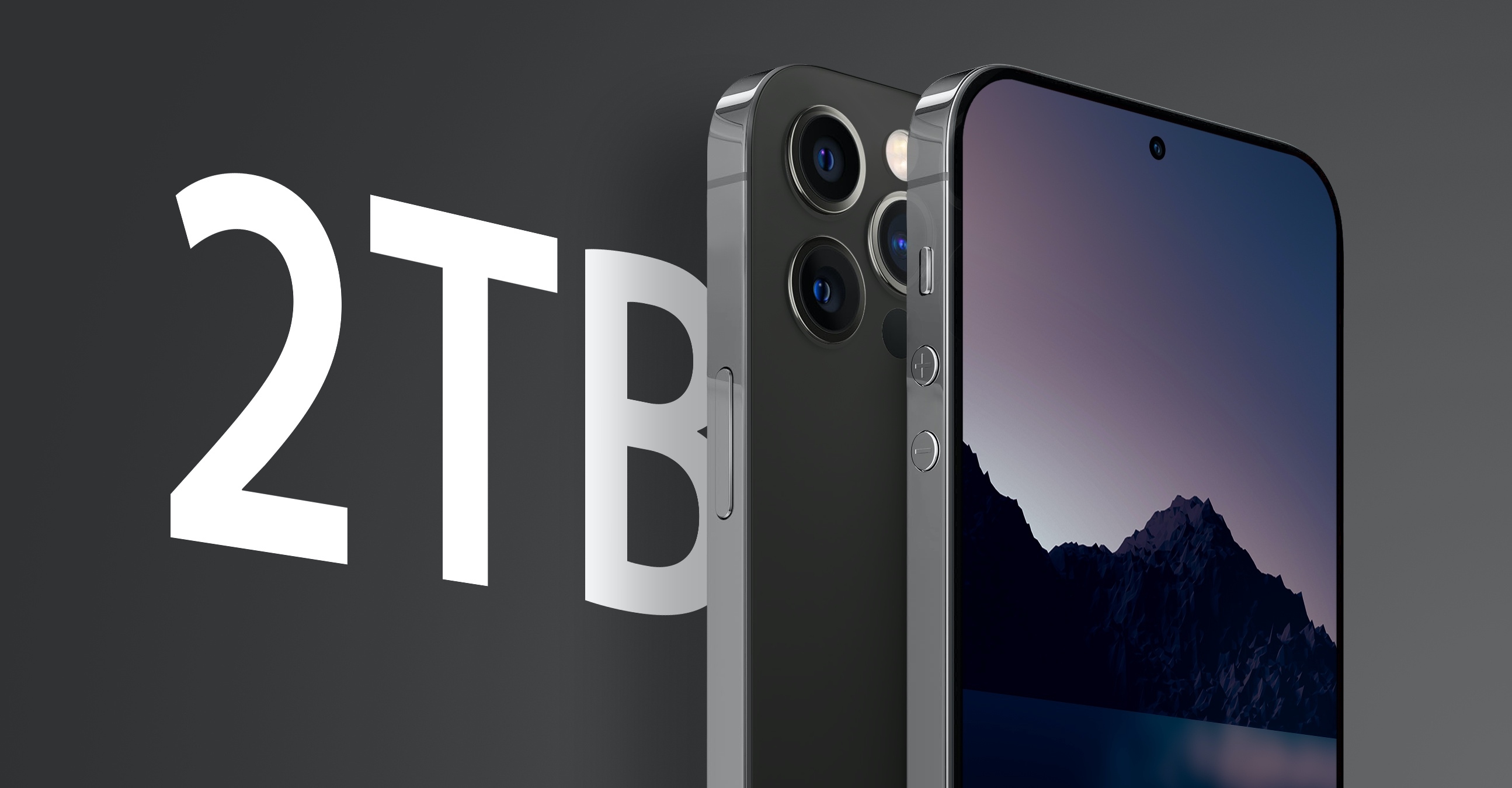 With the iPhone 13 Pro and iPhone 13 Pro Max, Apple added a 1TB storage option for customers, the largest ever storage configuration offered on an iPhone. The new option was due primarily to new camera features, such as ProRes for videos launching later this year. ProRes videos, in addition to 4K 60FPS videos shot on the iPhone, consume significantly more storage than regular videos.

Apple has marketed the iPhone 13 Pro and iPhone 13 Pro Max as the ultimate tool for videographers and cinematographers, and the 1TB choice is inherently tailored towards the most professional of users.

With the iPhone 14 next year, Apple is settings its eyes on making its Pro iPhones even more "Pro" by offering a 2TB option, according to a sketchy rumor from Chinese site MyDrivers. The rumor, which should be viewed with a considerable amount of skepticism, claims that Apple will adopt QLC flash storage for next year's iPhone and that thanks to the newer storage technology, it will increase capacity to 2TB.

A report earlier this week from DigiTimes was the first to suggest Apple would be adopting new storage technologies for next year's iPhone, but that report lacked mention of a 2TB option in specific.

Apple doesn't regularly offer new storage configurations, and when it does, as evident this year by new camera features, it has a reason in mind. Next year's iPhone 14 is expected to focus more heavily on a complete redesign that removes the notch rather than concentrate on camera upgrades. Regardless, camera improvements are a given for every new iPhone. Still, there's no indication to think that the iPhone 14 will expand camera capabilities to the extent that a new 2TB storage configuration is practically warranted.

For the iPhone 14 lineup, Apple plans two 6.1 and 6.7-inch models, meaning the end of the smaller 5.4-inch form factor, according to Apple analyst Ming-Chi Kuo. On the higher-end iPhone 14 Pro and iPhone 14 Pro Max models, 6.1 and 6.7-inches in size, respectively, Apple's rumored to include a hole-punch design for Face ID rather than a notch. There's also the possibility of the higher-end models featuring titanium bodies and a vapor chamber thermal system.

Catch up on everything we know so far about next year's iPhone using our dedicated guide.

Article Link: After 1TB iPhone 13 Pro, Rumor Says iPhone 14 to Feature Up to 2TB Of Storage

That they have marketed the newest iPhone as a cinema camera that you can shoot films on, but with only 1TB of storage and no external storage is a joke.
Reactions: FelixDerKater, willchris, rome1453 and 3 others

really? it took what, 3 years to get up to 1tb? and next year it will be 2tb. then 3tb.
Reactions: willchris, rome1453, centauratlas and 2 others

I have to admit that render looks nice
Reactions: GrumpyMom, velo, Mantahoe and 4 others

DOUBLE IT ALL
Reactions: GrumpyMom, willchris, rome1453 and 1 other person

Fail apple will not abandon the notch after a redesign. No way.
Reactions: purplehaze0 and Orange Bat

I wish I could have a hybrid of iCloud backups with local Time Machine backups for iOS devices. You can exclude what you don't want included for Cloud and Time Machine iOS local backups.
Reactions: rome1453 and zapmymac
C

Season 3 of The Morning Show will be filmed entirely on an iPhone 14 camera.
Reactions: johnmarki, TVreporter, willchris and 17 others

Apple should stop screwing around and just build a camera already ?
Reactions: willchris, knweiss, Alex_Mac and 12 others
S

To accommodate the storage bug?
Reactions: Burger Thing, GrumpyMom, Alex_Mac and 7 others
O

HeavenDynamic said:
iPhone 15 is going to have a 15TB option.
Click to expand...

Seems like next year we are gonna see the 12MP camera bumped up a lot...so users can spend all their storage space and the 128GB base model becomes unviable. Pro models will come in 128GB, 512GB, 1TB and 2TB - forcing people to jump to 512. The perfect Apple up-sell strategy.
Reactions: johnmarki, GrumpyMom, willchris and 13 others
C

2T is good, but first please fix bugs that I think take up no more than a couple of megabytes of code
Reactions: GrumpyMom, TVreporter, willchris and 2 others
J

Waiting for someone to ask why go for a 2TB [or any higher storage option] and never understand other use cases...
Reactions: velo, Alex_Mac, opiapr and 1 other person

I really need to upgrade from my iPhone 8.... but that notch-less version looks REALLY nice.
Reactions: johnmarki, velo and rome1453
N

Now Apple found a way with this feature to sell iPhones with more than 512 GB or 1 TB to the customers.
On the other side.. the base configuration has still 256 GB SSD in a MacBook - after 10 or more years.
Last edited: Oct 1, 2021
Reactions: GrumpyMom, autrefois, Scottsoapbox and 10 others
S

1rottenapple said:
Fail apple will not abandon the notch after a redesign. No way.
Click to expand...

I wouldn't call shrinking the notch on the current design a redesign.
Reactions: willchris, velo, bossfan61 and 2 others
B

I will place my order for 2TB right away ?
Reactions: GrumpyMom, caoimhe, LFC2020 and 6 others