AirPods were originally slated to launch in October, but the wireless earphones were later delayed. Apple said it needed "a little more time" before they are ready for customers, and it has yet to provide an official update since. 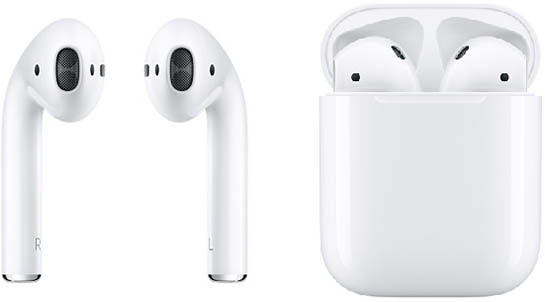 While the exact reason for the delay remains unclear, a person familiar with the development of AirPods told The Wall Street Journal that Apple's troubles appear to be related to its "efforts to chart a new path for wireless headphones," in addition to resolving what happens when users lose one of the earpieces or the battery dies.

A person familiar with the development of the AirPod said the trouble appears to stem from Apple's effort to chart a new path for wireless headphones. In most other wireless headphones, only one earpiece receives a signal from the phone via wireless Bluetooth technology; it then transmits the signal to the other earpiece.

Apple has said AirPod earpieces each receive independent signals from an iPhone, Mac or other Apple device. But Apple must ensure that both earpieces receive audio at the same time to avoid distortion, the person familiar with their development said. That person said Apple also must resolve what happens when a user loses one of the earpieces or the battery dies.
Click to expand...

Last month, Barclays analysts said AirPods should enter production in December. Their research note said quantities would be limited to between 10 and 15 million AirPods to start. Meanwhile, an alleged email response from Apple CEO Tim Cook said AirPods should begin shipping over the "next few weeks."

With just two weeks remaining in the holiday shopping season, some believe Apple should now wait until the new year to launch AirPods, in line with an early rumor about a January 2017 launch. The wireless earphones remain listed as both "coming soon" and "currently unavailable" on different sections of Apple's website.

Update: Apple blogger John Gruber says he's heard that manufacturing issues have delayed the AirPods, rather than a technical problem.

It makes more sense to me that Apple has run into a manufacturing problem, not that they discovered a design defect after they were announced.

"More difficult to manufacture at scale than expected" is also what I've heard through the grapevine, from a little birdie who knows someone on the AirPods engineering team. Things like what happens when you lose one or the battery dies -- Apple solved those problems during development.
Click to expand...

how was this not among the first things addressed in its development?
Reactions: RuralJuror, tripmusic, MrkJensen and 114 others

None of the reviews ever mentioned this problem. Wonder why they think it is now?
Reactions: saiz66, tomidelucca, diddl14 and 14 others
S

Maybe they should have had these completely ready to go before removing the headphone jack on their phone?
Reactions: RuralJuror, poppy10, milo and 136 others

Tim Cook should really step down. Whoever he put in charge of product testing/development should be fired.
Reactions: poppy10, atakordie, Romy90210 and 66 others
S

Easy to fix. Simply use a wire to connect the pods. Oh wait...
Reactions: RuralJuror, atakordie, milo and 73 others
R

sputnikv said:
how was this not among the first things addressed?
Click to expand...

Lets be honest they didn't bother checking that the lightning EarPods worked properly before releasing them . At least these aren't available yet.
Reactions: Romy90210, simonmet, panther quest and 7 others

Interesting that those with review units didn't notice the issue... must have cropped up in rare instances.
Reactions: simonmet, diddl14, lena and 5 others

How did they get this far in development -- with a planned release date in October -- with such a major issue?!

Has Kickstarter influenced the minds of executives worldwide?!

Blackstick said:
Interesting that those with review units didn't notice the issue... must have cropped up in rare instances.
Click to expand...

Or it's so subtle that the reviewers didn't notice.
Reactions: Romy90210, diddl14, naeS1Sean and 3 others

This is embarrassing for Apple, but it's still much better to not release them until they're ready.
Reactions: Romy90210, TiquanS, NewtonAurelius and 12 others

Here come the people complaining about Apple taking too long to test something before release...
Reactions: TiquanS, jeffirl, blasto2236 and 9 others
S

There are better 3rd party products that are ready to go for purchase and great qualities.
Last edited: Dec 9, 2016
Reactions: Romy90210, Ryan Burgess, otternonsense and 6 others
M

A cable to each one would solve this instantly.
Reactions: RuralJuror, milo, Moorepheus and 19 others
M

Better than the issue I thought: they wanted to make sure the batteries weren't going to explode.
B

So Apple is announcing product releases before they've even completed the design and engineering phase?
Reactions: Ryan Burgess, sideshowuniqueuser, simonmet and 32 others
R

Did any reviewers note this as an issue?
Reactions: saiz66
F

belvdr said:
Easy to fix. Simply use a wire to connect the pods. Oh wait...
Click to expand...


I can imagine an Apple engeneer reading this comment and saying: GENIUS! OF COURSE, MORE DONGLES TO OUR WIRELESS! = MORE PROFIT!.
Reactions: saiz66, Harloh, ReneR and 1 other person

MacRumors said:
Apple must ensure that both earpieces receive audio at the same time
Click to expand...

...not an unreasonable expectation when talking ear phones.
Reactions: milo, d0nK, saiz66 and 4 others
M

Unless they appear in shops in the next week (which I doubt), they've totally missed the xmas shopping period. I'm hoping execs at Apple are incredibly annoyed and putting on the pressure.
Reactions: saiz66 and Aldaris

Sad, they seem to be taking more time to QA the AirPods then they did with their 2016 MBPs.
Reactions: sideshowuniqueuser, simonmet, nia820 and 18 others

So they were potentially delayed for technical related issues. So be it. I would rather have a product that works exceptionally versus be riddled with intermittent fault errors. And it won't change that these won't sell, because they will sell out/back order with in the hour.
Last edited: Dec 9, 2016
Reactions: fiveainone, TiquanS, bobob and 17 others
You must log in or register to reply here.
Share:
Facebook Twitter Reddit Email Share Link
Register on MacRumors! This sidebar will go away, and you'll see fewer ads.
Sign Up
Top Bottom