While Apple is widely expected to expand use of its Touch ID fingerprint sensor to the iPad Air and iPad mini later this year, new photos of an alleged "perfect replica" of the second-generation iPad Air shared by Nowhereelse.fr [Google Translate] hint that there may be a few additional changes in store for the device. 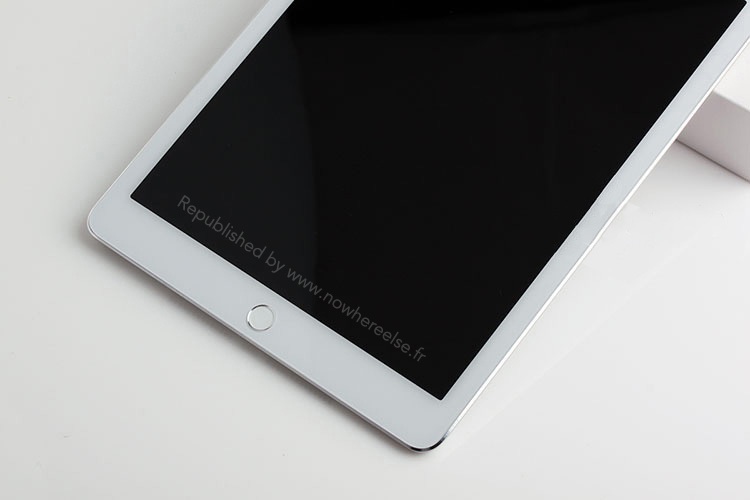 The replica, which is making the rounds in China and Japan, unsurprisingly depicts a Touch ID home button for the device, but also shows some tweaks to physical features around the edges of the device, including a new speaker grille with a single row of larger holes on each side of the Lightning port as opposed to the current double row of smaller holes on the iPad. 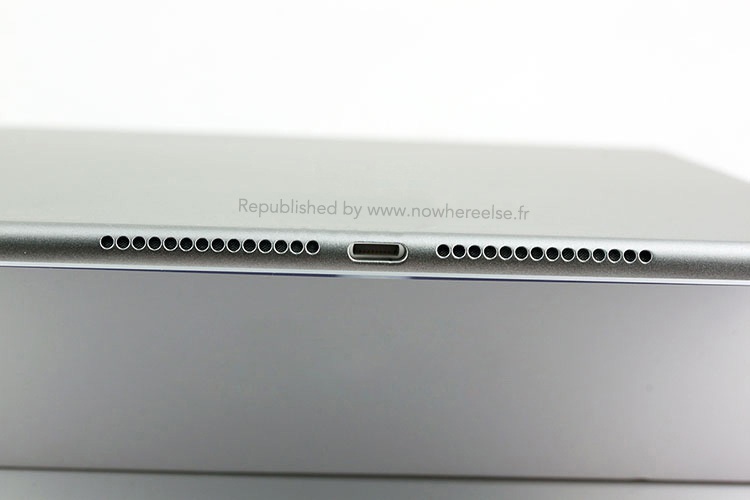 Another difference lies in the volume buttons which are shown slightly recessed into the edge of the case, compared to the current design that sees buttons protruding slightly from a flush holes machines in the device's shell. Nowhereelse.fr mentions that the mute switch is also missing, although there is a small hole where the feature is usually located. Unfinished protoype and mockup parts sometimes feature these pilot holes to guide machining of the final hole. 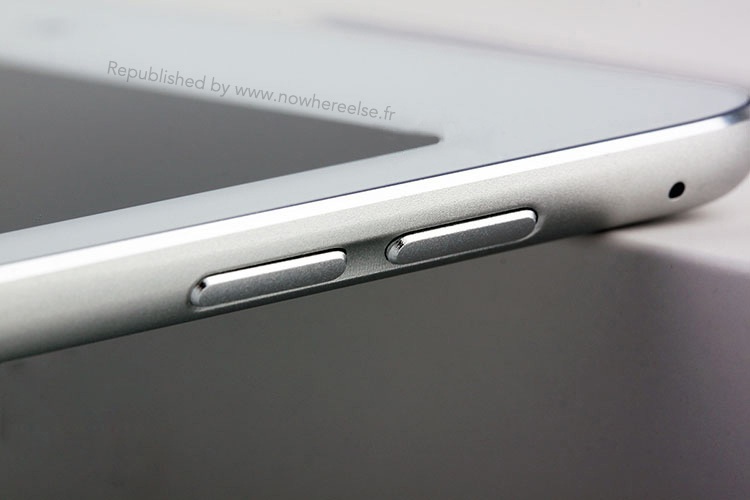 Updated iPads are expected to launch later this year, with October being Apple's usual timeframe for such launches over the past couple of years. The latter part of 2014 is expected to be a busy one for Apple, with rumors of launches for the iPhone 6, new iPads, the iWatch, and perhaps some Mac updates such as the company's rumored 12-inch Retina MacBook Air.

Looks beautiful. Count me in for one.
Comment
D

Who cares? We all know everything about iPad Air 2's physical form. Maybe leaks some specs, some geekbench scores.
Comment
A

Lopsided audio again, count me out. the audio on the ipad mini is terrible.

How hard can it be to have audio from 2 sides of the ipad?? Too hard for that designer at Apple!!
Comment

This looks sexy, unlike the iPhone 6 mockups.
Comment
N

While these features are good-looking, none of this is shocking. Touch-ID and some tweaks to the buttons were expected anyways. Just makes the innards more interesting now - processor/ RAM/ display/ storage options and price. But a lot of these can be revealed only after the product ships and people have had the chance to take apart the device.
Comment

MR really needs to learn to use words other than "alleged" to describe every rumor. Even if the word didn't imply something illegal or undesirable (which it does), it still does not improve with constant repetition. The dictionary is full of words.
Comment
D

Ugh, I really thought my retina iPad mini with its 64-bit A7 chip would last me years... but with iOS opening up the fingerprint SDK to apps, and password keychain in safari working great across my devices, the thought of never typing a password again is SO tempting. I'm one of those people who have a different password for each site.
Personally, more tempting to me than any other processor, retina display, anything they've ever offered.

Here I am 8 months later ready to upgrade.
Comment
S

Will it be twice as fast as current model? So the geekbench score could go as high as 4500. Hmm, that will be even faster than the macbook pro 2009 generation...
Comment
D

Never, Form over Function.
Although they might do that when they put forward facing speakers on iMac.
Comment
L

Unless there is more RAM and Touch ID based multi user accounts, I'm skipping this generation.
Comment
B

I wish Apple would stop releasing everything in Q4, it makes buying their products a nightmare and nigh on impossible.

I'm currently in the market to replace my iPad 3, Nexus 5 (with an iPhone) and purchase an iWatch (if and when it's released).

If a Retina iMac was announced I may be tempted to replace my Late 2012 27" iMac also.

IJ Reilly said:
MR really needs to learn to use words other than "alleged" to describe every rumor. Even if the word didn't imply something illegal or undesirable (which it does), it still does not improve with constant repetition. The dictionary is full of words.
Click to expand...

We'll try to mix in a few more purporteds and ostensibles.
Comment

It'll be the most gorgeous tablet on the market

While it would sound great, much better, possibly truer stereo sound... it would look a little ugly and un-Apple like. They like the sleek form factor, and no one wants to see holes in front of the device, even though it may be better audibly.

I would rather they figure out somehow to create better audio with their engineering, somehow trick my ears, with some fancy 3d audio engineering or what not. I don't know what I'm talking about but it sounds good to me.
Comment

No mute button is unlikely, but this is a good design replica of what Jony would improve.
Comment

WildCowboy said:
We'll try to mix in a few more purporteds and ostensibles.
Click to expand...