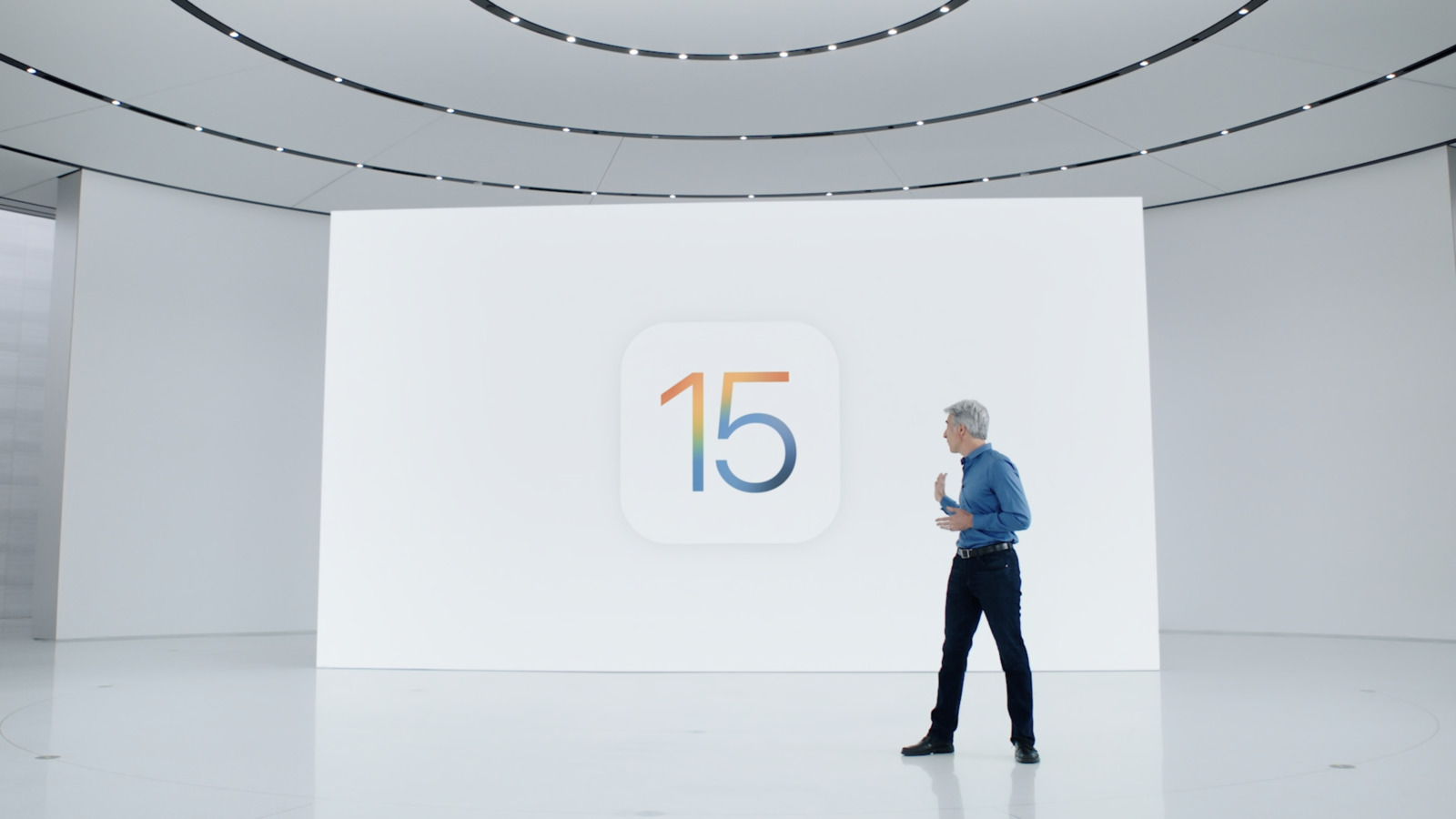 In iOS 15, FaceTime features a new grid view and portrait mode support for video. For audio, FaceTime calls now offer Spatial Audio so that voices sound as if they are coming from where the person is located on screen, and adaptive voice isolation for a more natural experience.

In addition, users can now generate a shareable link to a scheduled video call, and can join FaceTime calls through the browser on Android and Windows devices.

"SharePlay" in FaceTime allows users to bring music, videos, and movies into calls in sync, as well as share screens. SharePlay works across iPhone, iPad, and Mac, and with shared playback controls, anyone in a call can play, pause, or jump ahead. SharePlay is also available as an API to be integrated into third-party apps such as Disney+, HBO Max, and TikTok.

Notifications in iOS 15 have been redesigned, adding contact photos for people and larger app icons. There is now a notification summary that presents notifications based on how users interact with their apps and priority. 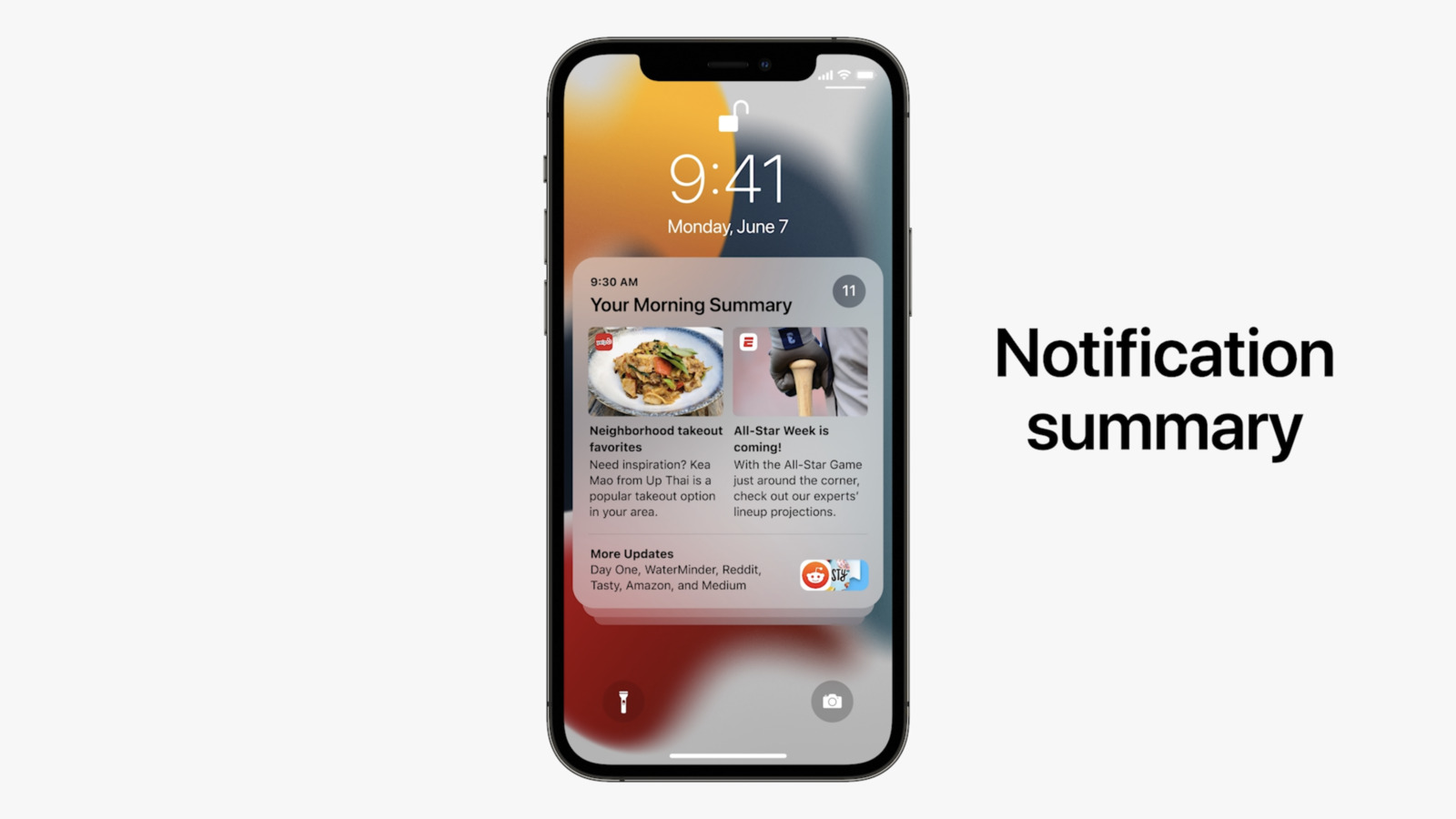 iOS 15 offers new user statuses called a "Focus." A Focus filters notifications and apps based on what a user wishes to focus on. Users can create a custom Focus or select a suggested Focus. Users can also create Home Screen pages with apps and widgets that apply to moments of focus to display relevant apps only.

When a user's Focus or Do Not Disturb status blocks incoming notifications, their status is displayed to others in Messages.

In iOS 15, Photos will also be presented in Spotlight searches and Apple Music songs can be added to Photos memories. Memory mixes are synchronized with the video and images, and user-configurable with intelligently chosen songs from Apple Music. 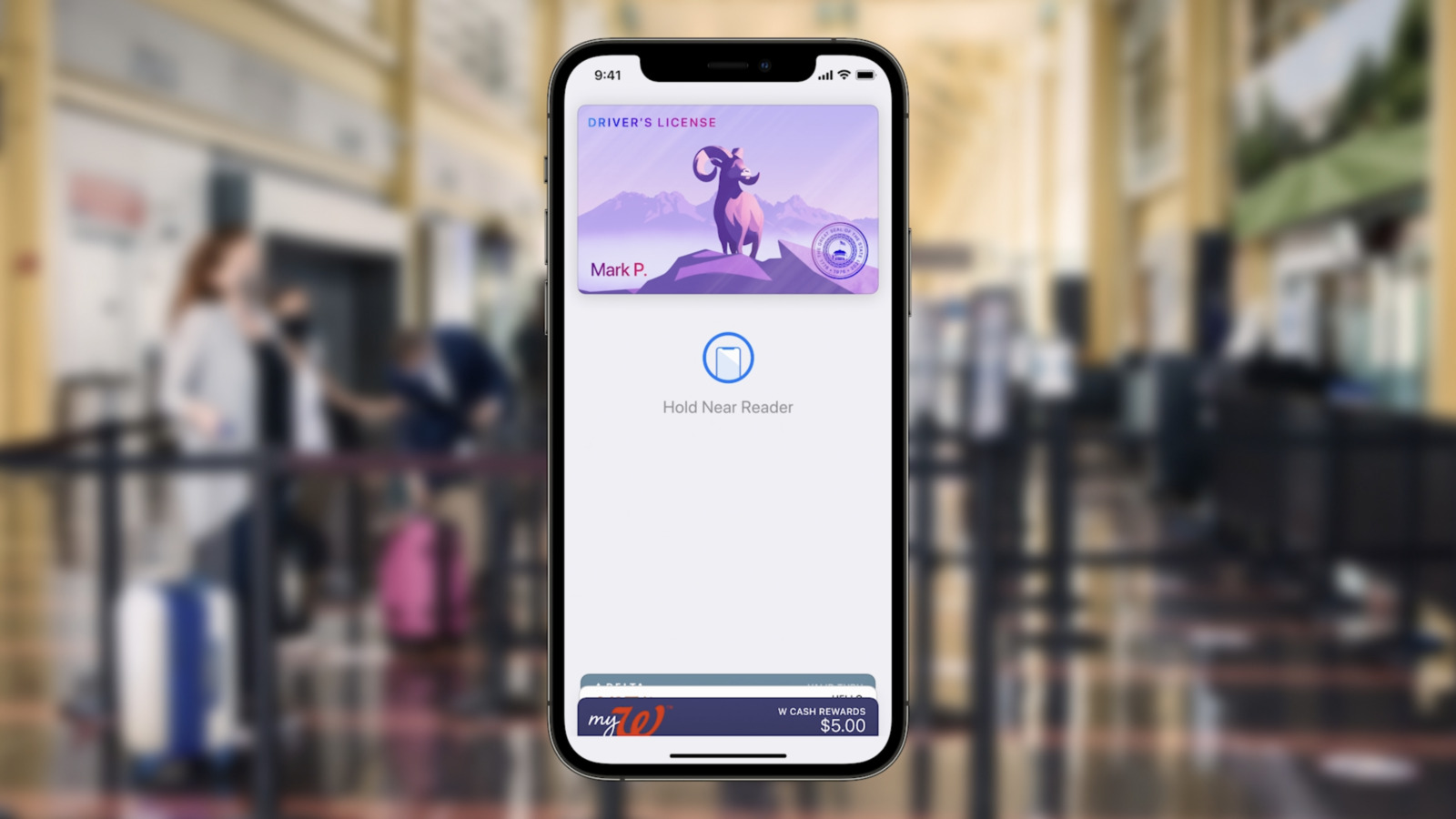 Wallet will also supports identity cards in the United States. Users simply scan their ID to add it to the Wallet app.

The Weather app now features a completely new design, a full-screen in-app map, and new background animations that reflect the sun's position. The new design changes based on conditions and notifications can highlight when rain or snow starts and stops. 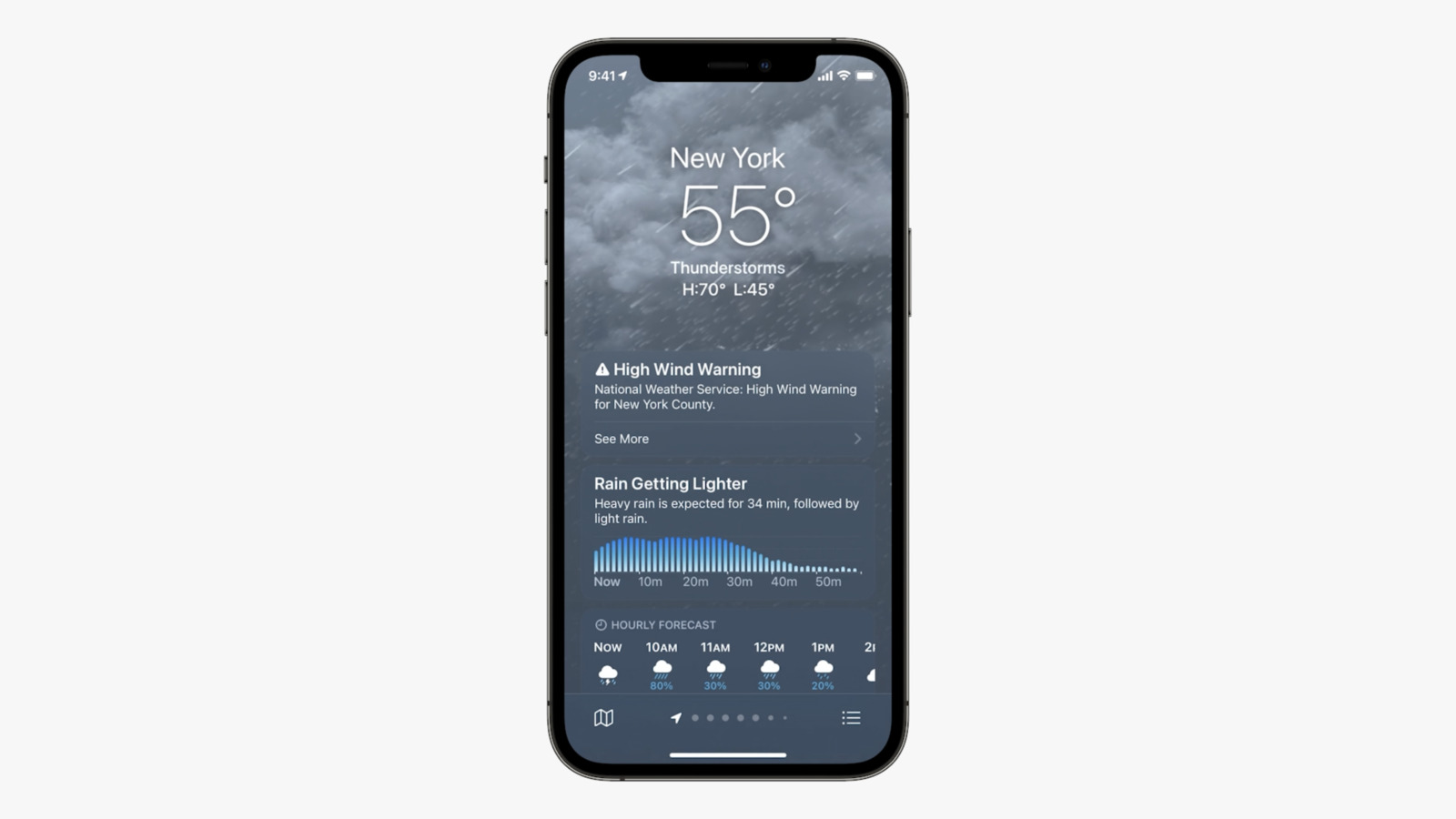 Maps features a globe view and a much more detailed 3D view in cities, including a new night-time mode. There are new road details, such as turn lanes, medians, bike lanes, and pedestrian crosswalks, to assist drivers in cities.

There is now more information in the Transit view, and Maps now automatically follows you during a transit route and can alert you when to disembark, as well as offer more detailed directional information.


With iOS 15, users can hold up their iPhone, and Maps will generate an accurate position to show detailed walking directions in augmented reality.

Safari features a completely new design with easier-to-reach controls. There is a new, compact tab bar that floats at the bottom of the screen so users can swipe between tabs. There are also tab groups to allow users to easily access them at any time across any device. Safari on the iPhone also supports extensions for the first time and a customizable start page.

The Health app has a new sharing tab that lets users share their health data with family or caregivers, and Trends can highlight meaningful changes in health metrics. Find My adds a new widget, support for live-streamed locations, and AirPods on the Find My network.

iOS 15 will be available on all of the same devices as iOS 14, meaning that all iPhones from iPhone 6S and newer are supported.

They are definitely trying to position FaceTime as a competitor to Zoom with these new features.
Reactions: TropN, applesque, zachz and 5 others
N

Is there a Messages-free stream?

Great new features for iMessage!!
Wow I can’t wait to use it with my friends!!
Oh wait, iMessage it’s not cross compatible on android or web?

GuesI’ll never use any of those great features.

Go apple for privacy, more reason to use Facebook messenger because there is no popular alternative to compete Apple.
They had a chance to really make a pro privacy statement with making a
safe app people can use.

soon as they make something cross compatible, they’ll have an app to win the masses. The longer they don’t act, the harder it will be in the future when they decide to release a competitor.

I’d rather iMessages 50% less features and be cross compatible instead of an unused app because everyone else has WhatsApp.
Last edited: Jun 7, 2021
Reactions: 8rlee8, BraytonAK, parasight and 6 others

Why is it still impossible to mark threads as unread so we don't forget to reply?!
Reactions: Hendihensidyebdndkd, TropN, netrom2211 and 13 others

Brilliant features so far!
Reactions: DeepIn2U, primarycolors, CarpalMac and 2 others

Omg that notification update is horrendous. please god let us disable that
Reactions: 123, victorm1, Babygotfont and 6 others

"uses intelligence to suggest" == annoying after 5 minutes and will be turned off.
Reactions: 4487549, Hendihensidyebdndkd, 123 and 10 others

Live text? Been using the non-Apple version for quite a while.

While this is all great - for a normal user like myself - I will never use it or perhaps not remember any of this..nor will most users who do not use most of the features. Its all eye candy now and im like wow yes! i like it..but when it comes to use it..nope..i ignore or dont care about notifications, nor have friends who I want to call to just share music or videos..who are these features targeting for? Also facetime with links? love to use it..but tell that to my employer who use teams or zoom! hey lets use facetime for work..nope.

Its all cool but its too much info that needs some digesting! I do like the text in photos! which is godsend when trying to remember that one pic without tags maybe!
Reactions: Jony Ive and Co., Squillace and Homme

A lot of it seems to be a little late into the pandemic
Reactions: 4487549, M1Chip, TheSkywalker77 and 1 other person
K

I see some 4th Amendment issues with the Digital ID. Right now, the police can’t require you to type in your password to unlock your phone. But if you need to do so to show your ID, that opens it up to search.
Reactions: primarycolors, MacAddict1978, adammusic and 1 other person

KPOM said:
I see some 4th Amendment issues with the Digital ID. Right now, the police can’t require you to type in your password to unlock your phone. But if you need to do so to show your ID, that opens it up to search.
Click to expand...

It will be interesting to see how that comes out.
I see some potential issues here. Great idea, but ...
Reactions: MacAddict1978, Hastings101 and cpnotebook80
G

Since they haven't provided a device compatibility list, it looks like it will run on my 2016 SE!
Reactions: primarycolors and TheSkywalker77

It really shows how 2020 slowed everything down. It doesn’t seem like an impressive rollout of features.

sounds great though! At least they only focused on a few things instead of spreading the little workforce they had thin for lots of new features.

It looks like anytime I tap something it will split the screen or do something unexpected. I can’t imagine using half this stuff. Yes, I am getting old.
Reactions: MacAddict1978

KPOM said:
I see some 4th Amendment issues with the Digital ID. Right now, the police can’t require you to type in your password to unlock your phone. But if you need to do so to show your ID, that opens it up to search.
Click to expand...

Would be cool if they put an ID icon in control center for immediate access to your id without unlocking anything else on your phone. Still requires face id to get to it.
Reactions: dk001
R

cnharris said:
"uses intelligence to suggest" == annoying after 5 minutes and will be turned off.
Click to expand...

Looks like a weak update in my opinion. I would love to see FaceTime and iMessage rolled out to other devices so I can communicate with my friends using these new features but as they are iPhone only I’ll probably only get to use them a few times.

JM said:
It really shows how 2020 slowed everything down. It doesn’t seem like an impressive rollout of features.

sounds great though! At least they only focused on a few things instead of spreading the little workforce they had thin for lots of new features.
Click to expand...

So far a lot of fluff but there is some meat in this.
Split Screen and Coding - Yes.
App Library - Not for me
iCloud - nice but can we trust is? Experience has shown iCloud is not the most robust cloud platform
Health - chuckle - my doc and lab won't - proprietary software. My Med Ins has their own app. Be great IF they can get more on board.
Not seeing anything that alludes to real use of the new M1 and RAM in IPP.

siri is synonymous for their "intelligence" So, special ed version of AI as we have today.