As expected at today's WWDC keynote event, Steve Jobs announced the next iPhone model, dubbed iPhone 4. The iPhone 4 features a new design relative to previous models and is identical to the model obtained by Gizmodo earlier this year, over which a search warrant was issued and criminal charges are being considered. 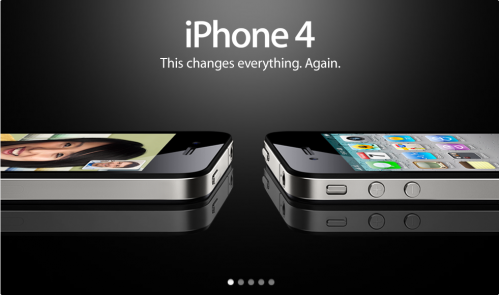 The new iPhone will have Apple's own A4 chip and a larger battery that will offer 40% more talk time than the previous model. It will also be capable of HSDPA/HSUPA speeds of 7.2Mbps down and 5.8Mbs up. Surprisingly, the iPhone will not see a storage bump in this generation, maxing out at 32GB like the current iPhone 3GS.

Other new additions include 802.11n Wi-Fi, a gyroscope to detect motion on 6 axes, as well as an LED flash to supplement the new 5-megapixel auto-focus lens. The updated camera will have 5x digital zoom and will record 720p HD video at 30 frames per second. Videos captured can be edited on the device using the new iMovie for iPhone.

The new iPhone 4 will also have a secondary microphone on the top for noise cancellation, as well as a front-facing camera for video calls. It will also use the smaller micro SIM, making use of the smaller SIM standard like the iPad.

Size-wise, it will be just 9.33mm thick, which is 24% thinner than the current iPhone 3GS. It will have a glass front and back with a stainless steel band that wraps around all sides. This band is used as part of the antenna system for the GSM, UMTS, Wi-Fi, and Bluetooth radios.

iPhone 4 will also have a Retina Display, a new display technology that packs in 326 pixels per inch, compared to the current iPhone's 163 ppi. Noting that the detection limit of the human eye is 300 ppi, Jobs described that the iPhone 4's display will "comfortably" exceed this and that text will be seen as a "fine printed book." The new iPhone's display will be the same 3.5-inch size of the current iPhone 3GS but with a resolution of 940 x 640 pixels and an 800:1 contrast ratio and the same IPS technology used in the iPad's display. 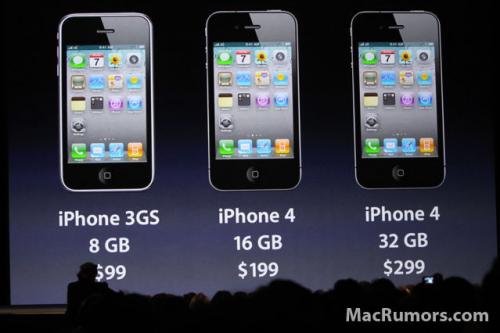 AT&T will be offering an early upgrade special for current iPhone users in the U.S., allowing the lower upgrade pricing up to 6 months earlier than the company normally does.

The 8GB iPhone 3GS will continue to be available and will be priced at $99 in the U.S. with a new 2-year contract.

Sorry but we knew EVERYTHING already!

NO big surprise! What a letdown!

This is the iPhone I want!

I've never been a fan of the previous iPhone models, in fact, I hated them.
Reactions: BrodieApple
O

Nice to see! The display is the main deciding factor for me!

opera57 said:
Nice to see! The display is the main factor for me!
Click to expand...

Me too. I'm also loving the new camera functionality.

The new display really is the biggest reason to get the new phone.

After using numerous 480x800 displays I have to say it's hard to go back to a lower resolution device afterwards.
Reactions: BrodieApple

By the way, did I miss something or what the hell with those video calls? Why only wifi? We had video calls already over 3G since 2004.. Otherwise, looking really good!
M

I want to know about non-contract pricing.
Reactions: BrodieApple

no 64 GB. Still, I think it's finally time for me to buy my first iphone. Up until now I've only had regular flip phones.

EDIT: since this is on the first page alot of people are responding, but I think the question has now non-rudely been answered, so thank you SO much to everyone(minus the rude person), that answered it. if anyone reads through all the post and has a better answer to it, please message me. and thanks for all the b-day wishes, and Happy Birthday to anyone else that has one coming up.
D

I'm sort of glad there's no 64GB option cos I would've bought it even though I don't need it. Really excited by the iPhone 4, the iPad had me totally underwhelmed but this thing's amazing.

Oh, and Gizmodo are a bunch of d**ks for ruining this surprise.
B

I still have the First Generation iPhone. This stuff is now what I will definitely upgrade for. I played the waiting game, but this is now far enough in tech, from my original, to make the upgrade worth it.

I actually love the iPad, but even without the screen real-estate and apps that truly make use of multi-panel/window interfaces like the iPad apps, this new iPhone is great on hardware features. Now if only Apple can step up production on the Camera connector accessories. This phone will make an even better companion to it. (And if apple is smart, they make sure that iMovie app will also be an iPad client, formatted for the iPad screen).

Camera flash, and use of light for HD videos, is incredible. The phone (though with contract) competes in cost with handheld cameras dedicated to 720p recording, by themselves.(And I'm talking about the ones from cheaper companies, not even the big brands) And those only take movies with no real ability to upgrade the menu system those have. Still, most of those have clunky menu systems that aren't even as easy to use as the 3GS.

Uses Micro Sim. UK users with o2 can register to get one sent before launch.

If you can afford a new iphone you can bloody well afford to upgrade your ancient OS.
B

If I'm reading this right, this means that if you upgraded to the iPhone 3GS last year, you won't be able to upgrade to this one because your contract won't expire until 2011.

If I have that wrong correct me but that's what it looks like.
N

Yes, this is a kick ass iPhone, and it has finally amazed and met our expectations....but no other announcements??? Apple TV updates? That last-minute leaked Magic Pad? Mobile Me for free? At least Steve brought back the "one more thing", but I was hoping it would have been more spectacular than Video Calling.

Nevertheless, it is an amazing iPhone.
F

nothing news,
it stays a phone for losers who wanna show it to their 14-year old friends

"And, because it's so mobile as your phone, you'll be able to chat... anywhere there's WiFi."

It's so mobile that you will be able to use it anywhere that you can use a non-mobile technology! Uh-maz-ing!