Apple has begun showing the teaser video for the upcoming Mac Pro in movie theaters across the nation. First shown at WWDC during the initial debut of the Mac Pro, the video shows the sleek black curves of the product from multiple angles.

According to reports from several people who have seen the teaser, it ends with the line "Fall 2013," offering the first concrete hint of when the redesigned Mac Pro might launch. At WWDC, Apple gave a "later this year" release date.

The new Mac Pro is a fraction of the size of the previous model and housed in a radically redesigned tower. It will come equipped with Intel Xeon E5 processors with up to 12 cores, dual workstation AMD FirePro GPUs, and new PCIe flash storage.

According to Apple, it is 2.5 times faster than the current Mac Pro, though benchmarks of the 12-core Xeon E5-2697 v2 processor have demonstrated mixed results, with the latest offering evidence that the Mac Pro will certainly offer a significant improvement over its predecessor, especially during demanding multi-threaded tasks.

It remains unclear when Apple might debut the Mac Pro in the fall months. The company is expected to hold an event for the iPhone 5S on September 10, with an iPad event to follow, and the Mac Pro could potentially surface at either time. Apple has also not announced pricing for the product, which is currently being assembled in the United States.

Here's hoping for "as early Fall as possible"...

Aside from the fact that it did nothing but look cool, I love this teaser.
And to anybody who thinks it looks like a trashcan: perhaps Apple could use this to their advantage: 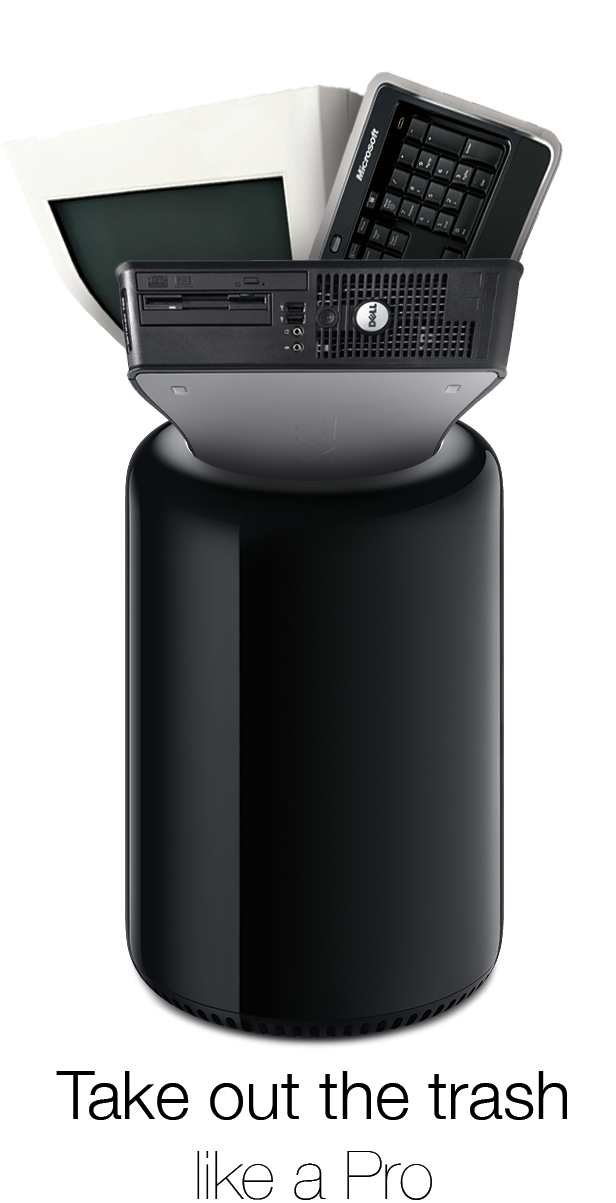 I want one, and I don't even want one. Wait, what?

The new Mac Pro is to sexy for a desktop!!

I saw the teaser earlier today and I couldn't believe it. I can't wait
A

I can't wait for this! It'll be awesome to use Realflow, Houdini, Mari, Modo, and ZBrush with

Lame. Thats not a good advertisement.

im guessing it will pop up at the IPad event, like last year
N

why would they advertise in movie theaters for what will likely be a $5000 desktop computer? They need to be targeting people who need these machines not the general public
D

While I agree, I also wonder: if true, why advertise to the masses in movie theaters (95% of whom will never even consider a computer in this price range)?
O

It's a move theater ad... do you have a better suggestion? This seems pretty much prefect for pumping up a theater about a computer imo.
U

newdeal said:
why would they advertise in movie theaters for what will likely be a $5000 desktop computer? They need to be targeting people who need these machines not the general public
Click to expand...

I think they're going for the halo effect. It's Apple's most powerful computer and its most starkly new design in recent years, so they want people to notice and say "Oooooh, ahhhhhh." I doubt they're hoping to boost sales of the Mac Pro itself with these ads.
S

I was in high school when the Cube came out, and I loved the design. Our family bought one.

I can't bring myself to fall in love with a computer now over its design aesthetics. The iMac and Cube were surprising. But I don't think you can surprise in that way anymore, or maybe it was just that I was a different person then.

I would be impressed by design function, and for me that would be extreme modularity. Something like the Cube where you can pull the whole computer out but with very easily replaceable parts.

I also don't understand advertising a device based on aesthetics to a general audience when it's a niche market device most likely (assuming the price is $2500 plus).

I guess they might be hoping there are people like I was back in high school who will buy an expensive desktop computer because it looks cool. I even wonder with the niche market being so small, whether Apple has to hope half the people who buy the Mac Pro are people who don't need it but will want it for the design.

So far, I haven't seen anything that is uniquely functional about the design of the Mac Pro. The only unique functionality they have cited is the thermal core, which is a unique functionality required by constraints they put on themselves: to build a much smaller Mac Pro. That might be interesting if they had built it small for a particular reason, but as it is, it just goes back to aesthetics as far as I can tell.

I guess aesthetics makes sense, though. If you're debating holding onto a niche pro product or not, why not go for something sexy that might have crossover appeal.

You don't have to sell me on this anymore.
C

That's going to make a great home theater PC. On my yacht.
I

So pros never go to the movies? Let Apple advertise this thing wherever they want.

if this thing is going to be monstrously expensive why would they market it to the masses like that?

I'm not saying that the high end won't be outside the realm of a car, but I do believe Apple will have an entry model within reasonable reach.
K

I can't afford one. Price is not going to be cheap.
M

mcdspncr said:
It's a move theater ad... do you have a better suggestion? This seems pretty much prefect for pumping up a theater about a computer imo.
Click to expand...

Unless people follow Apple rumors or saw/read about WWDC (which the majority of people don't), they'd have no idea this is a computer. Just a black cylinder with an Apple logo. "Oooh look how pretty it is." "What is it?" "I have no idea." "Eh... whatevs." It might pique some movie-goers' interests, but for the majority of people, it will probably just cause eye-rolls.
D

Wait what? It's showing as a teaser in movie theaters... as in you go to watch Star Trek, and you see this before along with the ads for new movies? That's really weird.
You must log in or register to reply here.
Share:
Facebook Twitter Reddit Email Share Link
Register on MacRumors! This sidebar will go away, and you'll see fewer ads.
Sign Up
Top Bottom