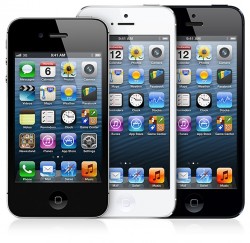 Back in June, it was reported that Apple was getting ready to launch an iPhone trade-in program at its U.S. retail stores, partnering with recycling firm Brightstar to give customers instant credit for their old iPhones to drive upgrades to newer models. According to the report from Bloomberg, the old iPhones would be refurbished and sold in emerging markets, lowering the cost of entry in those countries while preventing cannibalization of new device sales in Apple's established markets.

There has been little in the way of update on Apple's plans for the program since June, but MacRumors has now received word from several sources reporting that Apple is indeed beginning to prepare its store employees for the program. Apple has reportedly sent materials to its stores to support the initiative, while the first line of store trainers will be receiving instruction about the program today. Those trainers will then begin training other store employees next week ahead of a program launch.

We have yet to hear exactly when Apple plans to officially open the program, but it seems set to arrive just as the company unveils its next generation of iPhone hardware at a media event on September 10. The new lineup is expected to include both an iPhone 5S successor to the current iPhone 5 as well as a new iPhone 5C that is said to be essentially an iPhone 5 repackaged into a plastic shell available in a variety of bright colors.

Update: TechCrunch has some additional info about how the program works, including the fact that it is already live at a number of pilot Apple Stores in the U.S.:

A customer brings a working, non-liquid-damaged iPhone into an Apple Retail Store. It's then evaluated by an employee with the help of an online site that a customer can access using the store's iMacs or iPads. The customer then answers a series of questions about the condition of the device in order to determine a value.

That value can be used in credit for a new device but only if the customer has an upgrade credit available. So there is a carrier check involved. If a user does not have an upgrade credit, they could presumably pay the early termination fee of their carrier and use the credit towards a new device on another carrier.
Click to expand...

The value of the trade-in varies depending on physical condition, capacity, and color. TechCrunch claims 16GB iPhone 4 and 4S models range in value from $120-200.

Update 2: MacRumors has now heard that the program is scheduled to launch on August 30.

I'll probably be sending my 4S to Gazelle next month when my 5S comes. I've done eBay, but I feel like going the recycle route this year.
Q

anyone have any idea how much the trade-in program was in the past for the latest model (in this case the 5)..?
O

It will be pretty convenient to trade in your old iPhone and buy your new one in the same place.

I will definitely be handing over my 4S to pickup either an AWS iPhone 5/5S. I hope the apple store in Canada are also getting the training or else I will have to find an excuse to travel to NY again.

Too bad they won't have it in Canada

If they match Gazelle, I would much rather just trade it in at the Apple Store versus sending it in and going through all that.

Good news for mine and my family member's iPhone 4's that are just collecting dust in my house...

I'm hoping I can trade in my iPhone 4 even though it is exhibiting a yellow tint on the upper right side of the screen and a sticky home button, again.
A

I hope it's not going to be like University book stores.

Here's to hoping this will not be a US only service. Would love to be able to trade in my 5 if the price is right.
B

It's convenient but a lot less than what you can sell it for on craigslist. As long as you use common sense, craigslist can is relatively safe. People get in trouble when they agree to meet at someone's apartment, meet outside where one party can run away, or agree to ship the device.

anyone who thinks they will be offering reasonable return prices is just naive. This is a marketing ploy to get you into the store and buy a new one, then they repackage and resell your traded in one at a profit to 2nd world countries.

I tried this with my 3GS when I bought my 4S but they said they couldn't do anything with it.

Glad to hear they finally fixed it... it seems like a no brainer and I'm surprised it took them 7 generations* to do it.

*Plus all those generations of iPod before the iPhone

To each his own, but I'd rather take the 15-20 minutes it takes to take pics and create a listing on CL/eBay, than get lowballed on a trade-in program.

And if Apple's prices are anything like Gazelle, they can kick rocks. Last I checked, an unlocked iPhone 5 in excellent condition was fetching $320 on Gazelle.

All that said, trading a phone in would definitely be a lot less hassle. Good money grab for Apple.

Right now you can lock in your trade-in to Gazelle starting at $315 for a "good" iPhone 5 16GB, which isn't too bad. Also, it locks the quote in until October 15th, plenty of time to decide whether to upgrade or not.

On eBay/CL you could probably get an extra $150, but there is more risk.

If Apple matches the quote I might be more apt to just do it with them, less hassle.
I

I think this is a great way for Apple to maintain a customer relationship, and make some money in the used device market.
I

I'm still on my first smart phone (iPhone 4S), so I haven't head to think much about what to do with it when it's time to upgrade. I always dread that choice when it comes to technology for some reason. Since it was recently fully replaced through AppleCare, it's in great quality and I think I'll be able to get a good price for it... if I even upgrade!
N

This story about selling in 3rd world countries is bull. If apple buy your old iphone 5 and 4s - yes they will clean up and repackage and then simply use as refurbishment phones when customers come in with problems. These refurbs will be used in all countries, including the US

Only other option for apple is to sell to a private company who would then sell on to street traders and other unofficial channels. No decent shop anywhere in the world will sell these as refurbs.
E

This program is already in effect at the Dallas market Apple stores. My friend got $211 for her iPhone 4S and upgraded to the 5. Honestly for the simplicity, I would highly recommend going to an Apple store for trading up. Much easier than using an online service.

Newjackboy said:
This story about selling in 3rd world countries is bull. If apple buy your old iphone 5 and 4s - yes they will clean up and repackage and then simply use as refurbishment phones when customers come in with problems. These refurbs will be used in all countries, including the US

Only other option for apple is to sell to a private company who would then sell on to street traders and other unofficial channels. No decent shop anywhere in the world will sell these as refurbs.
Click to expand...

Or, they could, you know, REFURBISH THEM.