The change follows Apple's announcement earlier this month that its free radio-listening feature would be discontinued at the end of January but would remain available to Apple Music subscribers.

As of this morning, iOS Music app users who tap on a radio station are bounced to a screen prompting them to join Apple's premium streaming music service. 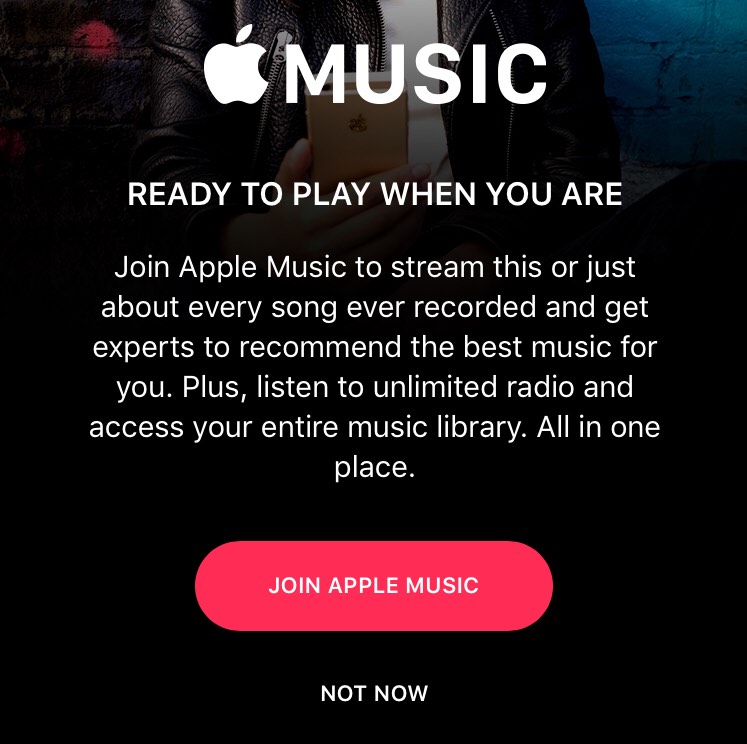 Likewise, iTunes users on a Mac who attempt to access the stations or create their own are met with a dialog window asking them to "Get on Our Wavelength" and join Apple Music.

Users with an iTunes Match subscription are also no longer able to access the stations. However, Apple's Beats 1 radio channel remains available to iTunes users worldwide as a free listening option.

Apple had quietly continued to offer ad-supported iTunes Radio stations in the United States and Australia even after the launch of Apple Music on June 30, 2015. However, after the company's decision to wind down its mobile iAd platform, the feature was already being limited in other regions to those who pay for Apple's streaming music service.

iTunes Radio was originally released with iTunes 11.1 and iOS 7 as a free ad-supported service, offering music discovery through featured and genre stations provided by Apple or through the creation of new stations based on a specific artist or song.

I'm an Apple Music subscriber, so it doesn't affect me. But this is a classless move inasmuch as iTunes Match subscribers just had a perk of the service they were paying for taken away. Not cool, Apple.
Reactions: tmorrow, StupidMac, aarond12 and 44 others
H

Totally sucks. I liked the Chill and Classical stations. Aren't the premium prices we pay sufficient to have at least a few free radio channels?
Reactions: StupidMac, ruimpinho, MrNikeFresh808 and 20 others

Don't care. Why pay for something when others offer it for free?
Reactions: StupidMac, ruimpinho, dan110 and 10 others

Apple giveth, Apple taketh away - as usual.
Reactions: StupidMac, colourfastt, dan110 and 18 others
2

I don't see how this goes well for Apple and the iTunes Store. I listened to several stations to hear new music that I would later buy. Now I can't listen to new music so I guess I won't discover or buy much now. And I will not subscribe - I pay once only for a song. The drug dealer model, I will not support.
Last edited: Jan 29, 2016
Reactions: tmorrow, Leighwest, StupidMac and 22 others
D

Is Apple aware of what other services offer for free? Spotify on desktop is so far above any offering that this move will only certainly hurt Apple.

There is a section of my grocery store that used to give out free samples of yogurt covered pretzels and I would always swing by for a bite. So I started buying cases of them for long road trips cuz they were really good. Now they got rid of the free samples, and I just tend to forget they're there.
Reactions: Leighwest, StupidMac, ruimpinho and 10 others

I canceled a month ago. i liked it but rarely used it. I find myself listening to SiriusXm much more. I also can't even remember the last time i actually bought any music, whether it be from iTunes or from another store. Spending money on music these days is rare. if there is a song id like to hear at home i find myself looking it up on youtube

Im also an iTunes match subscriber but barely listen to my collection these days. I'm considering canceling that service too
Reactions: StupidMac, teleromeo and dan110
C

I'm disappointed. I really used this allot since its introduction. My radio stations were really fines tuned because I would spend time customizing the songs and artist to listen and not listen to. It was truly great for me. Ever since Apple Music I lost the capability to modify the station (customize who to remove/add an artist into my already established station). I was disappointed then but they were still really good stations. I listened to them daily!!!

Is there an alternate service that is free, lets you edit the station to tell it which artist or song to keep and which to stop playing like iTunes Radio use to allow ?
[doublepost=1454071217][/doublepost]

LucasLand said:
I canceled a month ago. i liked it but rarely used it. I find myself listening to SiriusXm much more. I also can't even remember the last time i actually bought any music, whether it be from iTunes or from another store. Spending money on music these days is rare. if there is a song id like to hear at home i find myself looking it up on youtube

Im also an iTunes match subscriber but barely listen to my collection these days. I'm considering canceling that service too
Click to expand...

You can't cancel iTunes Radio because it was free. I think your talking about Apple Music. This is not it. This was the radio service they introduced before Apple Music
[doublepost=1454071268][/doublepost]

robertcoogan said:
Don't care. Why pay for something when others offer it for free?
Click to expand...

You didn't pay for iTunes Radio. This is not Apple Music folks!!!!!
Reactions: StupidMac, HVDynamo, AleXXXa and 1 other person

WORLDWIDE is not US + Australia

Not a huge shock for most of the WORLDWIDE users here... Sorry Americans + Aussies .
Reactions: StupidMac, hfletcher, Karma*Police and 3 others

So now we have yet ANOTHER useless button in the Music app on iOS. Thanks Apple. When I tap that my only option is Beats 1, the over other link on that page is for a radio station that won't play.

I'm so glad I went with Google Music. Now I'll do everything I can to avoid opening the Music app. I wish I could somehow uninstall it.
Reactions: StupidMac, MrNikeFresh808, attila and 10 others

camarograna2 said:
Is there an alternate service that is free, lets you edit the station to tell it which artist or song to keep and which to stop playing like iTunes Radio use to allow ?
Click to expand...

Have you tried Pandora? aka what iTunes Radio copied
Reactions: tmorrow, StupidMac, AleXXXa and 2 others
C

iTM but not an AM user here. I found the streams too redundant IMHO, playing the same songs over and over in each "station". Oh well, not forking over for AM, spending more time listening to Amazon's free offering built into Prime now anyways...
Reactions: StupidMac, Hastings101, AleXXXa and 4 others

I applaud this decision, as it really clarifies the options to the customer.

I believe musicians should be paid for their creative endeavours.

I pay for an Apple Music family subscription as that's currently the best method for me to pay while being able to discover new music that I otherwise would not have heard.
Reactions: StupidMac, brianlbaker, lionkin and 11 others
M

Yup your right no longer works and guess what?? I'll never pay for streaming radio nor will I ever pay a subscription for Apple Music, never!!
Reactions: StupidMac, ruimpinho, gt1948 and 9 others
C

ToroidalZeus said:
Have you tried Pandora? aka what iTunes Radio copied
Click to expand...

Thanks ToroidaZeus I use to have pandora and they did not have the fine tune option before. Now they do so I will use pandora now. Just have to rebuild my lists
Reactions: StupidMac, brianlbaker, AleXXXa and 2 others

iTunes Radio ceases to be… and the most part of the world where it never was available doesn't care…
Reactions: StupidMac, ruimpinho, lionkin and 9 others

Boo. This sucks Apple
Reactions: tmorrow, StupidMac, ruimpinho and 11 others

It was still working? I must have been clicking in the wrong place since once Apple Music came out I couldn't figure out how to get back to the old free radio, so I just went back to Pandora.
Reactions: StupidMac and ring33

Cuban Missles said:
...And I will not subscribe. I pay once only for a song. The drug dealer model, I will not support.
Click to expand...

Personally, I don't understand some peoples' animosity over subscription streaming services. If it's a purely fiscal decision, such as the fact that the subscription would cost you more money in the long run that's fine.

But making it about some sore of philosophical choice is kind of dumb, IMO. Take my situation, as an example. Before Apple Music came along I had well over 3,000 songs in my library. Probably 40% of them purchased from iTunes. I was spending on average more than $10 a month for songs that I was buying, and I have been doing so for years. With Apple music, for less per month I get to download and listen to any one of literally millions and millions of songs on a whim. The fact that I can put up to six people on the account for $15 a month (there are currently 3 on my account) makes it even more economical.

To use you example about listening and discovering new music, Apple Music shifts that in your favor. Now, when you hear a song or an artist that you like you can, for no additional money go out and find more of their music, and download and listen to it.

Apple Music has helped me discover music from artists I had already known by allowing me to download much bigger portions of their catalog, thereby showing me music of theirs that I would have never otherwise seen or heard.
Reactions: StupidMac, GreginNJ, tsang2320 and 3 others

iTunes and the Music app on the phone have become so cluttered you can't even tell what is what anymore.
Reactions: StupidMac, enzo thecat, attila and 26 others

MrGuder said:
and guess what?? I'll never pay for streaming radio nor will I ever pay a subscription for Apple Music, never!!
Click to expand...

Guess what? I use Apple Music every day. Love to use it while I work-out, and in my office. $10/month is a small price for something so useful in my life. I don't understand people who won't get something for $10. I can understand saving like $1,000 on something, but $10 is pigeon feed. I'm glad my finances are better than yours.

My whole model of listening has changed with Apple Music. Sure, I have options, I could choose Spotify, but Apple Music is more convenient and cheaper. The family plan brings our cost to less than $5 a person.

I now hear a song by an artist, and find out other albums the artist has made, and listen to the whole albums in their entirety. I'll find a few favorites and add them to my work or work-out playlists.
Reactions: StupidMac, Spendlove, GreginNJ and 6 others
You must log in or register to reply here.
Share:
Facebook Twitter Reddit Email Share Link
Register on MacRumors! This sidebar will go away, and you'll see fewer ads.
Sign Up
Top Bottom