Apple CEO Tim Cook: 'You Will See Us Do More in the Pro Area' 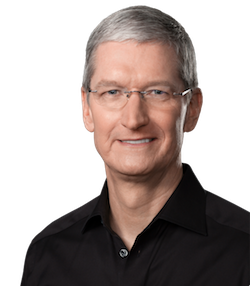 During a Q&A session at today's shareholder meeting held at Apple's Cupertino campus, Apple CEO Tim Cook reassured investors that Apple is still very much focused on its professional customers and has plans to "do more" in the pro area.

Cook's comments were directed towards the Mac, Apple Watch, services, and iPad, but may reassure those who are worried that Apple is abandoning its desktop Mac lineup, especially the Mac Pro. The Mac Pro has not been updated since December of 2013, going more than 1,100 days without a refresh.

"Don't think something we've done or something that we're doing that isn't visible yet is a signal that our priorities are elsewhere," Cook also told investors.

There have been no hints that a Mac mini or Mac Pro refresh is on the horizon, but Apple is rumored to be planning to introduce new iMacs in 2017, perhaps as early as March. Future iMacs are expected to be updated with USB-C ports and AMD graphics chips.

At the meeting, Cook was also questioned about a potential convergence between the Mac and iPad lines, in the form of a touchscreen Mac. While Cook said he didn't want to comment on future product plans, he again reiterated that he sees the iPad and the Mac as two separate product lines that serve different purposes.

"Expect us to do more and more where people will view it as a laptop replacement, but not a Mac replacement - the Mac does so much more," he said. "To merge these worlds, you would lose the simplicity of one, and the power of the other."

Much of the rest of the shareholder meeting consisted of voting on several proposals and reiterating information that was previously shared during Apple's January earnings call. While no shareholder proposals passed - including those calling for increased diversity and more transparency about donations - Apple reelected its board of directors, approved board compensation, and approved Ernst and Young as the company's accounting firm.

Article Link: Apple CEO Tim Cook: 'You Will See Us Do More in the Pro Area'

Come to me Ryzen Mac Pro
Reactions: Lopov Jack, ActionableMango, xSeaside and 44 others
A

I'm uncomfortable with how comfortable he is with seemingly lying.
Reactions: bliss1111, FrankeeD, IG88 and 114 others

He was obviously talking about the iPad Pro...
Reactions: FrankeeD, sidewinder3000, Atlantico and 43 others

Don't lie Timmy
Reactions: FrankeeD, sidewinder3000, Atlantico and 43 others
A

Why did you ever slow down in the "pro area", Tim?
Reactions: FrankeeD, Appleaker, The Captain and 51 others

Yes a few products are pretty long overdue a spec bump, and the platter drives have long overstayed their welcome, but Apple are in a significantly stronger position now than they were in 2011 — and I don't just mean financially.

A new Mac Pro every year since 2011 would have paled in comparison to their current achievements with in-house chips and so many other things. It's not to say they couldn't have done both, of course! But it's sometimes good to take a step back and see the larger picture.

'Do more' as opposed to do nothing.
Reactions: FrankeeD, jjhny, Vane and 54 others

Ok Tim, sure. In his defense, he has only been saying it for 4 years.
Reactions: fhturner, FrankeeD, Ulenspiegel and 54 others

thats all folks said:
I'm uncomfortable with how comfortable he is with seemingly lying.
Click to expand...

I'm uncomfortable with how willing people are to deny presented information to maintain the Apple-hate narrative in their heads, and go as far as accuse the CEO of bald-face lying.
Reactions: dhruveonmars, CNek, dsuden and 25 others

Your priorities ARE elsewhere. It's not speculation. Apple failed the creative pros long ago by simply not releasing products. People switched to Linux and Windows.
Reactions: bliss1111, FrankeeD, mbnt and 71 others
4

I still think the Mac Mini is done (Not that it should be). It's been overly ignored for far too long. Apple likely will place emphasis on the iMac, iPad Pro and Mac Pro (Hopefully).
Reactions: sidewinder3000, sunwukong, 69650 and 5 others
M

Don't you just love diversity for diversity sake. Who cares if they're best qualified.
Reactions: TheFluffyDuck, jjhny, NanoTubeReturns and 17 others

Translation: "we're going to continue to raise our prices"
Reactions: ThomasJL, mbnt, Ulenspiegel and 36 others

Relentless Power said:
I still think the Mac Mini is done (Not that it should be). It's been overly ignored for far too long. Apple likely will place emphasis on the iMac, iPad Pro and Kabylake MacBook Pro.
Click to expand...

Probably an iMac Pro coming at some point.
Reactions: xnu, Irishman, sunwukong and 2 others

filmantopia said:
I'm uncomfortable with how willing people are to deny presented information to maintain the Apple-hate narrative in their heads, and go as far as accuse the CEO of bald-face lying.
Click to expand...

what actual information was presented?
Reactions: jjhny, zimzalabims, dysamoria and 25 others

Maybe Tim thinks he can release Xcode for the iPad and expect that it will fulfil people's needs, which it won't - except maybe hobby coders .
Reactions: dysamoria, Atlantico, xnu and 10 others

Blablablablabla...
I didn't even bother reading the article. So sick of this crap. We had to make such major changes for my business because of Apple disgusting neglecting. Switched to Windows, don't like it, but at least it works and the computers are powerful. I miss mac, but will never come back because of the garbage we have to put up with.
Last edited: Feb 28, 2017
Reactions: mbnt, Ulenspiegel, pjl890 and 55 others
U

They have to do something, the last few years have been appalling. I have money to spend on some Apple stuff but there is nothing I want. I loathe the current generation of mbp laptops and there is no G5 equivalent desktop. Not interested in imacs. WTF apple? The so called pro not updated in 4 years? There is just nothing pro about Apple any more. Those G5 days were awesome, night and day compared to today.
Reactions: TheFluffyDuck, FrankeeD, mbnt and 40 others