Apple has issued a statement confirming that the HomePod can possibly leave white rings on wood surfaces with an oil or wax finish. 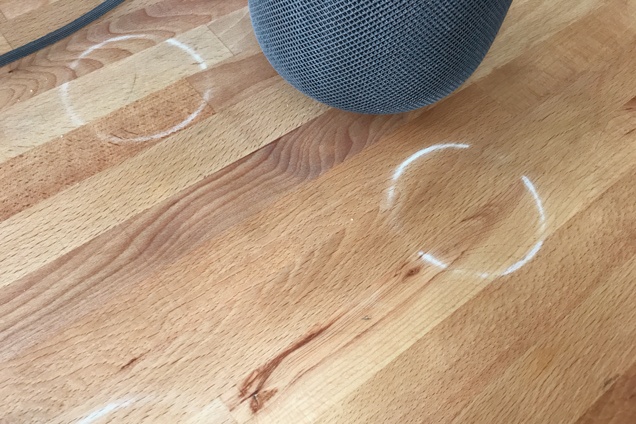 Image: Wirecutter​
The strange discovery was brought to light in HomePod reviews published by Wirecutter and Pocket-lint, as highlighted by VentureBeat, while at least one customer shared a picture of the same problem on Twitter.

For our tests we placed the speaker on a solid oak kitchen worktop treated with Danish oil.

Within 20 minutes the HomePod had caused a white discoloured ring to appear on the wood that some days later has faded, although still hasn't completely disappeared.

We subsequently tested the HomePod on other materials: the same wood that hadn't been treated with Danish oil and a regular lacquered desk and haven't seen the same issues.
Click to expand...

Apple told Pocket-lint that it is "not unusual" for a speaker with a silicone base to leave a "mild mark" when placed on certain oiled or waxed surfaces, suggesting the rings are caused by chemical interactions with treated wood. 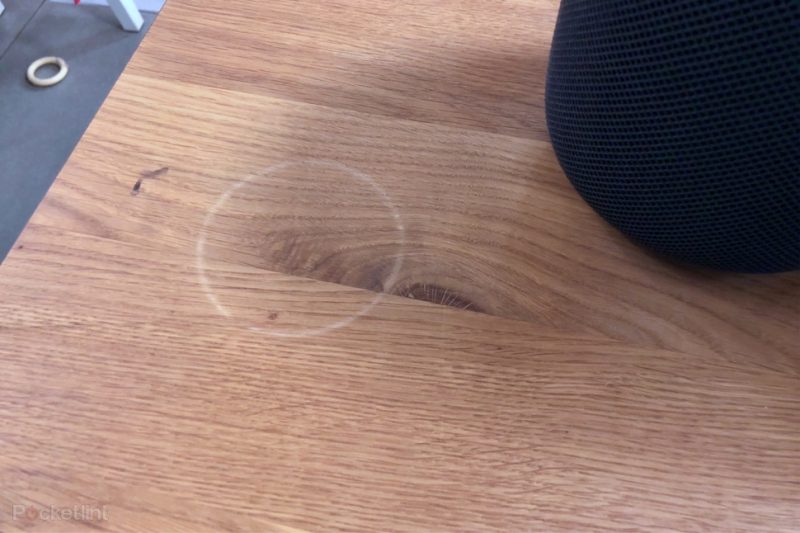 Image: Pocket-lint​
Apple told Wirecutter that "the marks can improve over several days after the speaker is removed from the wood surface." If not, Apple recommends "cleaning the surface with the manufacturer's suggested oiling method."

The HomePod can damage wood furniture: An unhappy discovery after we placed a HomePod on an oiled butcher-block countertop and later on a wooden side table was that it left a defined white ring in the surface. Other reviewers and owners have reported the same issue, which an Apple representative has confirmed. Apple says "the marks can improve over several days after the speaker is removed from the wood surface," and if they don't fade on their own, you can basically just go refinish the furniture--the exact advice Apple gave in an email to Wirecutter was to "try cleaning the surface with the manufacturer's suggested oiling method."
Click to expand...

It's unclear at this point whether the issue is limited to treated wood, or if the problem could cause any sort of long-term damage to the HomePod's rubber base. For now, we would obviously recommend not placing your HomePod on a surface with an oil or wax finish if possible.

Update: Apple shared a "Cleaning and taking care of HomePod" support document that includes a section called "Where to place HomePod." This section includes details on the silicone base of the device and warns that it can cause marks on some wooden surfaces.

HomePod is designed for indoor use only. When using HomePod, make sure to place it on a solid surface. Place the power cord so that it won't be walked on or pinched.

It is not unusual for any speaker with a vibration-dampening silicone base to leave mild marks when placed on some wooden surfaces. The marks can be caused by oils diffusing between the silicone base and the table surface, and will often go away after several days when the speaker is removed from the wooden surface. If not, wiping the surface gently with a soft damp or dry cloth may remove the marks. If marks persist, clean the surface with the furniture manufacturer's recommended cleaning process. If you're concerned about this, we recommend placing your HomePod on a different surface.
Click to expand...

Apple also suggests users avoid putting the HomePod near heat sources and liquids, and advises users that it can be cleaned with a damp cloth.

Seriously... did we really think there wouldn’t be a major quality control issue of some kind after their recent poor performance in this respect? Surely they envisioned someone would place this on a wood surface, after all, isn’t that what’s in Apple Stores?
Reactions: DiamondarBoss, Niklas_nick, DEXTERITY and 16 others
D

That's just swell. I haven't placed HomePod on a wood surface like this yet. Good to know. Queue the "You're using it wrong!" comments. haha
Reactions: pratikindia, tennisproha, 341328 and 2 others
C

It’s so you can put it back right where you found it!

Maybe it should come with a warning?
Reactions: DEXTERITY, DonRivella, schneeland and 7 others

Try explaining why your home pod is using a coaster next time company comes over lol
Last edited: Feb 14, 2018
Reactions: flowave, nburwell, DEXTERITY and 18 others

Looks like we’ve got our first drama of the year.
Reactions: Shark5150, Kabeyun, LandRovers and 1 other person

You're tabling wrong!
Reactions: bunnicula, vanwo, chipb and 4 others
F

Clever way for Apple to sell an accessory for HP.
Reactions: Romy90210
A

iRing or, Apple Ring. next product from apple: a $49 silicone mat for HomePod which can also be used with other destructive-to-wood objects, like hot cookware
Reactions: flowave, DEXTERITY, ignatius345 and 12 others

It's not "damaging wood furniture." It's reacting to oil or wax on the wood that isn't naturally there.
Reactions: Black Tiger, Titleist, varunsanthanam and 10 others

This is not unique to HomePod... many, if not most, synthetic rubber bases like this will cause issues with certain oils used to protect wooden furniture.

My advice would be to use something else to protect your furniture, if you want to rest devices which have silicone bases directly on the table.

Or, like mom always said, "Use a coaster!" A disk made of thin cork or felt small enough to cover the silicone, but still be unobtrusive, would prevent the marking.
Reactions: varunsanthanam, iwan073, OldSchoolMacGuy and 7 others

But look at the perfection of that circle. Nobody does a circle like Apple. They may not be first, but...

I actually want circles on my furniture.

I think my furniture looks better with the circle.

Buy an HP and get a furniture tattoo for free.

It's clearly the furniture's fault.

Who buys wood furniture anymore anyway? What is this? the 1800s?

That's what you get for buying cheap wooden furniture.

Can I brand myself with an Apple circle if I lay down and set an HP on me for a few days?

All But the actual ADF responses are going to be entertaining for this one.
Last edited: Feb 14, 2018
Reactions: Compote, Niklas_nick, JackANSI and 32 others
4

Nonetheless, not something you want to see if it was an expensive piece of furniture or something that can’t easily be removed. But at least Apple releases a statement on the matter, being I could see some unhappy customers with a $350 Product leaving behind residue that may not be able to removed easily.
Last edited: Feb 14, 2018
Reactions: Shark5150 and pratikindia

Seems like a great opportunity for accessory makers.
Reactions: Compote, Jaro65, rafark and 1 other person
Z

Baymowe335 said:
Queue the doom and gloomers.
Click to expand...

I agree, but wouldn't you be pissed if this happened to an expensive piece of furniture? first world problems, i know, but it's not crazy for people to spend the cost of a well optioned MacBook Pro on a piece of furniture, or more
Reactions: flowave, Niklas_nick, ignatius345 and 10 others

This is the only way Apple can run rings round the competition nowadays it seems.
Reactions: flowave, SkimPappa, Compote and 40 others
M

Baymowe335 said:
Queue the doom and gloomers.
Click to expand...

Based on Apple's recent track record of releasing mediocre products, it may be warranted. Mark my words, unless there is a major shakeup in management and talent, Apple will begin to decline to Sony levels in 5 to 7 years. Remember how hot and untouchable Sony was back in the day? Then they started releasing crap products with little innovation and poor quality control, just like Apple is starting to do. Just you wait.
Reactions: flowave, Compote, Niklas_nick and 40 others

good grief....did apple NOT know this?????
Reactions: Niklas_nick, DEXTERITY, idunn and 5 others

As if I wouldn't use a coaster.
Reactions: bruinsrme