Apple today announced the surprise launch of new 13 and 15-inch MacBook Pro models, which are the fastest Mac notebooks ever at the top of the line. The updated machines feature Intel's 8th and 9th-generation processors, with high-end models featuring eight cores for the first time. 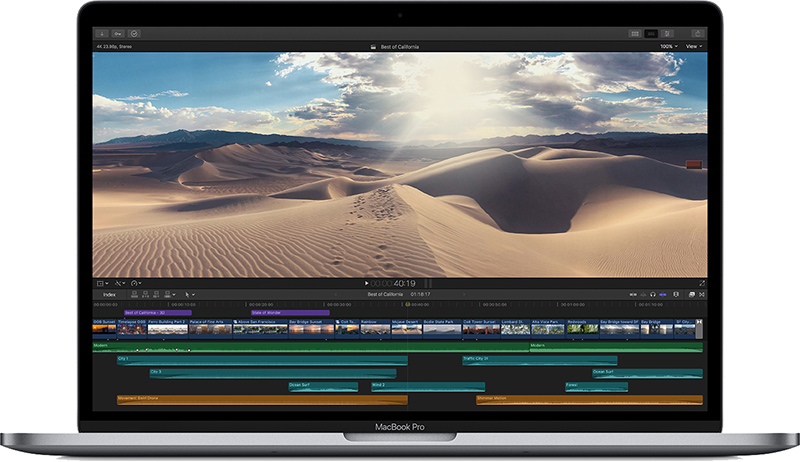 Aside from new processors, the updated MacBook Pro machines continue to feature the same design, despite rumors that Apple would introduce a 16 to 16.5-inch MacBook Pro in 2019. There are some internal updates, though.

Though not mentioned in the press release, The Loop confirms that the new machine has an updated keyboard. The new keyboard uses a new material that Apple says will cut down on the failure problems that users have seen.

Another change in the newest MacBook Pro computers is with the keyboard. While Apple says the vast majority of its customers are happy with the keyboard, they do take customer complaints seriously, and work to fix any issues.

To address the problem, Apple said they changed the material in the keyboard's butterfly mechanism that should substantially reduce problems that some users have seen.
Click to expand...

Apple did not explain what the "new materials" in the butterfly keyboard are, but said that the update will significantly cut down on issues like double key presses and missed key presses.

Apple is speeding up keyboard repair times in its retail stores, and extending its Keyboard Service Program to include the 2018 MacBook Pro and 2018 MacBook Air models, along with the new 2019 machines. The repair program lasts for four years after the first retail sale of a Mac machine.

The MacBook Pro continues to feature "the best Mac notebook display ever" with 500 nits of brightness, P3 wide color gamut, and True Tone technology. It is equipped with Apple's T2 security chip, Thunderbolt 3 ports, and immersive stereo speakers like prior machines.

"Whether it's college students mastering a course of study, developers building world-class apps or video editors creating feature films, we're constantly amazed at what our customers do with their MacBook Pro," said Tom Boger, Apple's senior director of Mac Product Marketing. "Now with 8-core processors for an incredible performance boost, along with its stunning Retina display, fast storage, all-day battery life and running macOS, MacBook Pro continues to be the world's best pro notebook and we can't wait to get it into our customer's hands to see what they do next."
Click to expand...

The new MacBook Pro models are priced starting at $1,799 and $2,399, respectively, for the 13 and 15-inch models. The new machines are available today through Apple's online store and will be coming to Apple retail stores later this week. Apple has not updated the non-Touch Bar 13-inch MacBook Pro machines.

I've been waiting for the new MacBook Pro to get released! Today is the day!

I'll have this purchased within the next two months in case there are any issues with it that are reported...
Reactions: TheYayAreaLiving 🎗, Appletise, amartinez1660 and 20 others

Does it come with a keyboard that works?
Reactions: pmore, mrex, Rob1547 and 96 others
B

It's exciting to see an Apple computer get regular updates again!
Reactions: Appletise, sideshowuniqueuser, MaximizedAction and 54 others

Until there’s a security problem and the processor has to be patched and runs at half speed.
Reactions: clauzzz203, packeteer, -BigMac- and 14 others

Apple today announced the surprise launch of a new MacBook Pro model, which it is calling the fastest Mac notebook ever. The new machine features Intel's 8th and 9th-generation processors, with high-end models featuring eight cores for the first time.

Does this mean no 16 inch model anytime soon?
Reactions: AjVontNjuMekPro, tridley68, Santiago and 5 others
K

Apple seems to have pushed this out early solely to solve the keyboard problem. Thermal issue is left in the back-burner yet again. No pun intended.
Reactions: pmore, Peperino, MaximizedAction and 40 others

How's that keyboard tho.
Reactions: clauzzz203, Jimmy James, macapplekid and 8 others

nice. my air is on its last leg.
Reactions: Glockworkorange, amartinez1660 and WardC
M

Someone get this laptop to Dave 2D's freezer fast!
Reactions: ibivibiv, startergo, twistedpixel8 and 24 others
P

outskirtsofinfinity said:
Does it come with a keyboard that works?
Click to expand...

I'm curious about this:

"Apple also told me that any problems with the butterfly keyboard on any of its MacBook Pros would be covered at no cost to the customer. The company has also taken steps to improve the repair process, shortening the time it takes to make repairs to the keyboards"

EDIT: Found my answer on the Verge:

So basically, if an earlier MBP has this problem, it will still be replaced with the older keyboard design that may fail anyway
Reactions: Glockworkorange, sideshowuniqueuser, geekon2wheels and 18 others

Is apple serious no re design no faster graphics just a cpu update, shame on apple give us something new like a new design
Reactions: Peperino, Rojaaemon, EndersShadow and 3 others

I see what you’re doing there.....
Reactions: deadoctopi, freddiebarnes, dan110 and 14 others

Such a premium for a computer without an SD slot! There were no updates for months and then the Pro gets 3 updates in less than a year. I'd love one but I think I will wait for a model without a Touch Bar.
Reactions: Appletise, SalisburySam, cam0217 and 37 others
You must log in or register to reply here.
Share:
Facebook Twitter Reddit Email Share Link
Register on MacRumors! This sidebar will go away, and you'll see fewer ads.
Sign Up
Top Bottom