Apple recently updated its website to indicate that an upcoming iOS 15 and watchOS 8 feature that will let you add your driver's license or state ID to your iPhone and Apple Watch in participating U.S. states has been delayed until early 2022. Apple previously said the feature would launch in late 2021. 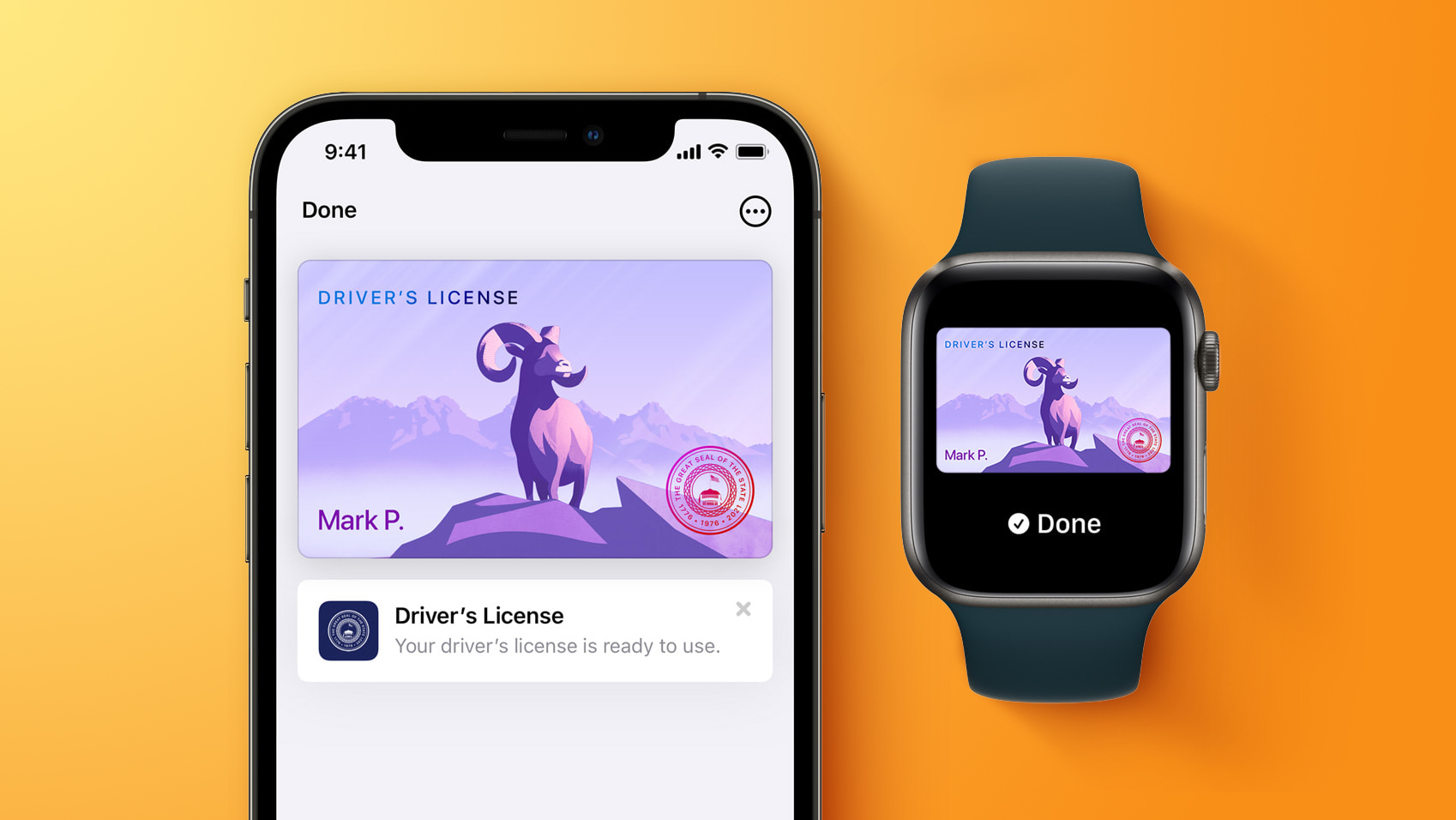 In September, Apple said Arizona and Georgia would be among the first states to introduce the feature to residents, with Connecticut, Iowa, Kentucky, Maryland, Oklahoma, and Utah to follow. Apple added that it was in discussions with many more U.S. states (reportedly including Florida) as it works to offer the feature nationwide in the future.

Apple has not provided a specific release date for the feature beyond the early 2022 timeframe, and the feature is not enabled in the latest iOS 15.2 beta. 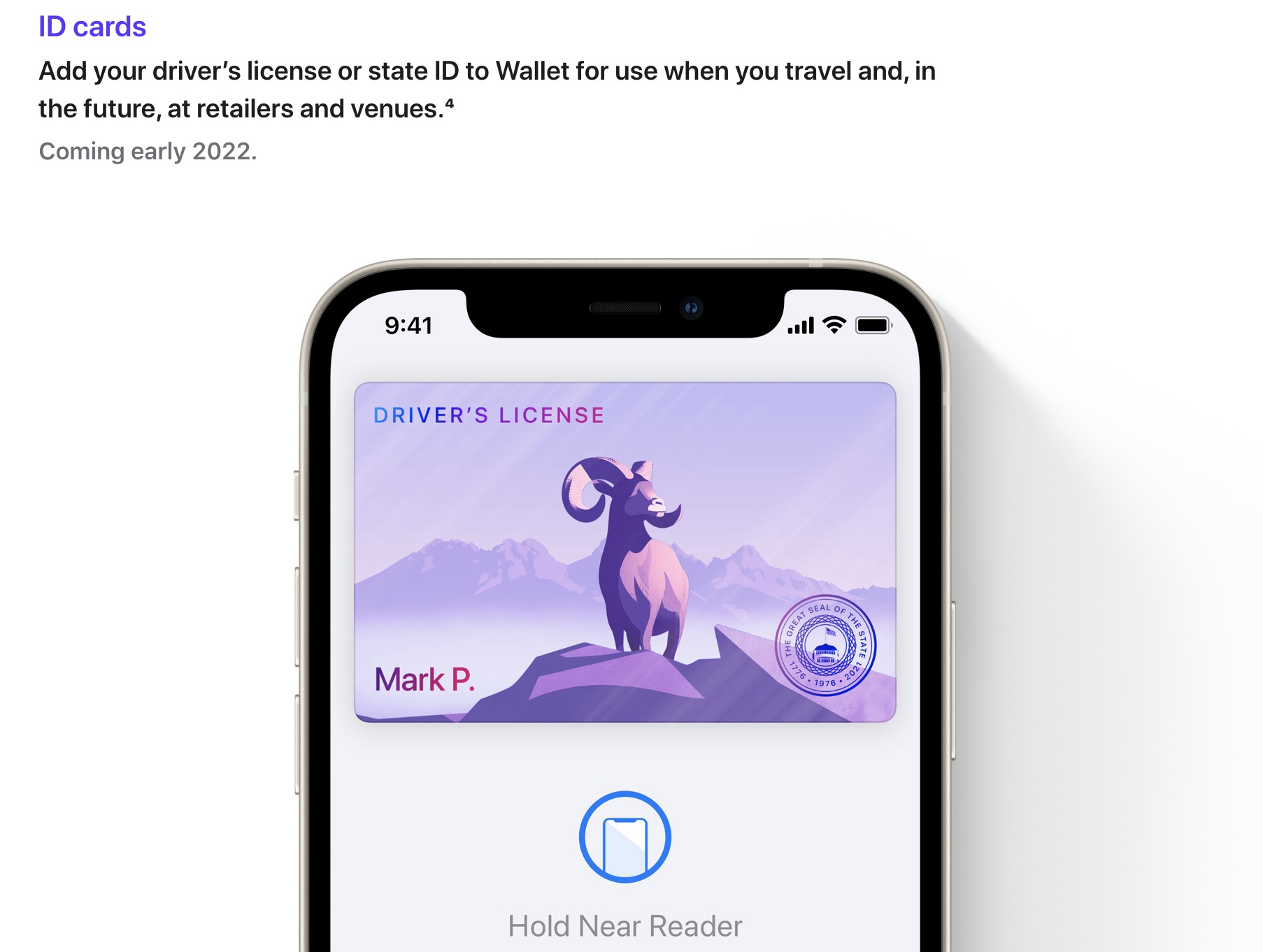 Apple said select TSA security checkpoints in select U.S. airports will be the first locations where users can present a digital ID in the Wallet app. Users will be able to tap the plus sign at the top of the Wallet app to begin adding a driver's license or state ID to the app, and then simply tap their iPhone or Apple Watch on an identity reader to present their ID to the TSA, without taking out their physical card or handing over their device.

Upon tapping their iPhone or Apple Watch on an identity reader, users will see a prompt on their device displaying the specific information being requested by the TSA. Only after authorizing with Face ID or Touch ID is the requested identity information released from a user's device, and they do not need to unlock, show, or hand over their device to a TSA security officer to present their ID, according to Apple.

Apple has emphasized the privacy and security protections of the feature. When adding a driver's license or state ID card to the Wallet app, the company said users will be required to take a photo of their face, which will be securely provided to the issuing state for verification. As an additional measure, Apple said users will be prompted to complete a series of facial and head movements during the setup process.

Article Link: Apple Delays iOS 15 Feature for Adding Your Driver's License to Your iPhone Until Early 2022

Amazing. Would be glad if they make it properly functional by iOS 16.2 and stop talking of things that are not 100% ready to ship.
Reactions: etrillos, Artemis70, dan110 and 20 others

More delays. Working from home is great and all but I have noticed now there is a delay on everything.
Reactions: svish, subi257, SFjohn and 12 others

I just hope New York gets on board with this. But it looks like they're probably going to utilize their "Excelsior Pass" app instead.
Reactions: clcnyc and Razorpit

lazyrighteye said:
Whoa. Interested to see how adoption rates play out. Asking states to add head count and other processes seems laughable, if not DOA. I would think Apple would make it as simple as possible for states to get on board. But it’s Apple, so who knows.
Click to expand...

Quoting myself from Nov. 15 - didn't know this would play out so soon.
But yeah... Not at all surprising. Anyone, with even tertiary knowledge of how state government budgets are managed and planned, knows that asking states to devote headcount, processes development and management to ensure smooth adoption is silly. If Apple truly wanted this to see rapid state-wide adoption, they would have needed to make it as resource-light on states as is possible. It does not appear that has been the case.
Last edited: Nov 23, 2021
Reactions: dan110, orzo95, MacCheetah3 and 6 others
N

I have had my Norwegian driving licence on my iPhone for several years now, using an app created by the licensing authority. It is only valid in Norway, and is very useful if you get stopped by the police, since not having your licence with you carries a small fine.

Hopefully, one day my passport will also be on there.
Reactions: Babygotfont, arobert3434, Todd Fisher and 11 others
X

Its supported in Denmark, and has been for a year orso + other official documents.. But provided through an app though
Reactions: dan110, SFjohn and Robert.Walter
J

maybe they are spending the resources to iron out all the bugs in iOS and macOS - that would be the positive spin on this ... but delay after delay, what good are announcements when you don't deliver??
I

Working with governments was of course going to delay this.
Last edited: Nov 23, 2021
Reactions: såskįa noïta, JJayguy23, UnknownIdaho and 14 others

Maybe because they are trying to get the states to fund it?

iBluetooth said:
Working with government was of course going to delay this.
Click to expand...

Not really. Announcing the release of a feature that wasn't ready for release was the real culprit here.
Reactions: freedomlinux, orzo95, Stridr69 and 4 others
M

Considering how there are still states that didn’t do exposure notifications I don’t expect this to take off too fast. Governments are notorious for using decade old technology.
Reactions: subi257, CosmicRadiation, RevTEG and 1 other person

Remember the first iPhone that had copy and paste feature delayed!? No one should be surprised by feature delays.
Reactions: amartinez1660 and Regbial

What's the holdup with more states on this? Apple's home state of CA still not on board?

I imagine it is a total nightmare having to work with 50 states and several territories, each with their own systems, to get this to work. The Feds have tried to get the states to use a uniform drivers license format and system, but not all of them have adopted it. You think the EU is a PITA to get stuff coordinated, try doing that in the USA! Oh well, I suspect the state I live in will be one of the last to allow this feature, so I’m not holding my breath... And BTW, I carry a real leather wallet, so I really don't even need this feature. It is about the same amount of energy/effort to pull out my wallet as it is to pull out my iPhone, so this feature isn't one I need anyway.
Reactions: Gasu E., amartinez1660 and Xiaojohn

Apple delays a feature? Shocking!!
Reactions: randomthoughts and Royksöpp
B

Colorado has the myColorado app with Driver's license, car registration, insurance card and Covid card included. Seems to work OK. Initial setup authentication was with camera tied to state database (similar to setting up Face ID) so they used the official license photo to verify. License has a watermark of sorts that moves when you move the phone.

An issue is training people who use it for age verification to know it is valid to accept it and what they need to do to verify it is authentic, and not just a copy of something. And that it is legally OK to accept it as an ID. Police are also supposed to have a reader that can read the id.

There is a lot more to having a different form of ID than the hard copy and what needs to be done for practical use. I'm curious how Apple Wallet will work with the needs for using an ID and if Apple has even considered the practical issues. What kind of training and equipment will be required at bars, for example, to permit them to accept the wallet id as authentic legally.
Last edited: Nov 23, 2021
Reactions: Gasu E., Babygotfont, person s and 2 others

macintoshmac said:
Amazing. Would be glad if they make it properly functional by iOS 16.2 and stop talking of things that are not 100% ready to ship.
Click to expand...

Nordichund said:
I have had my Norwegian driving licence on my iPhone for several years now, using an app created by the licensing authority. It is only valid in Norway, and is very useful if you get stopped by the police, since not having your licence with you carries a small fine.

Hopefully, one day my passport will also be on there.
Click to expand...

Do you have to give your phone to the police? How does it actually work? Would be ideal if they could just scan your ID with a QR code and you never lose physical possession of your phone...that I can't be okay with.
Reactions: subi257 and allseeingi’s
S

Better to be delayed and done right that to have it rushed out and broken.
Reactions: Agile55, cygy2k, james2538 and 3 others

I live in Sydney Australia.
Our state government has an app covering a range of services.
It includes an electronic facsimile of my drivers licence, my Covid vaccination certificate and the QR code software for checking in as part of our pandemic response.
If I went to another state I could download their app which might function differently - so that’s a disadvantage.
However my licence is still visible as well as the vaccination info, as long as people accept them in that form.
@miamialley The licence has a QR on it, so can be scanned. We only have to show it to the police, they don’t keep it.
Last edited: Nov 23, 2021
Reactions: allseeingi’s and Xiaojohn

TheYayAreaLiving ? said:
More delays. Working from home is great and all but I have noticed now there is a delay on everything.
Click to expand...

Blame Apple's culture, management, and the like, not working from home. I work for a hospital's app development team and we've been more productive since they sent everyone home, not less.
Reactions: freedomlinux, markphil1424, person s and 1 other person

BurgDog said:
Colorado has the myColorado app ...
Click to expand...