Apple set up an iMac Pro at the third annual FCPX Creative Summit in Cupertino, California over the weekend, providing attendees with a closer look at the powerful workstation ahead of its December launch.

Apple appears to have allowed attendees to take pictures of the iMac Pro at the event. French blog MacGeneration rounded up some of the photos shared on social platforms like Instagram and Twitter. 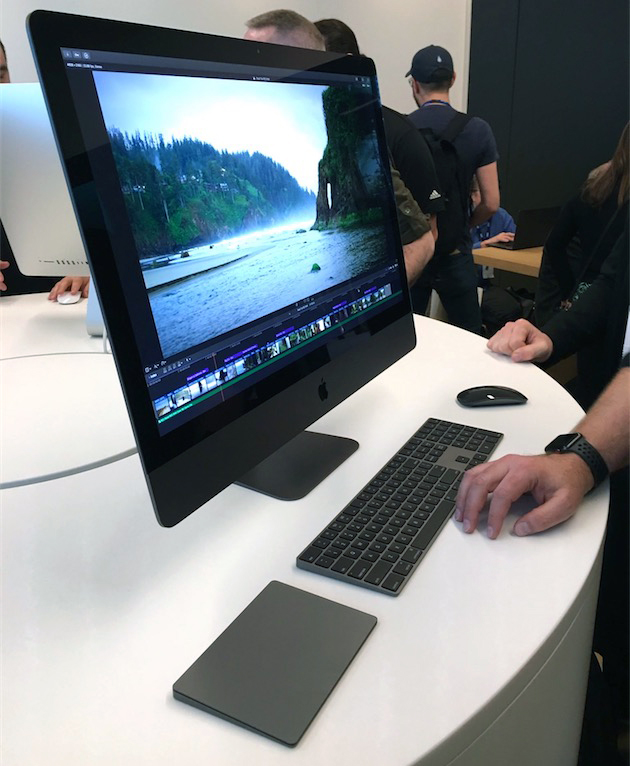 iMac Pro via Twitter user Softron Media​
iMac Pro shares the same design as the standard iMac, but with an all-flash architecture, a new thermal design, and four Thunderbolt 3 ports. It's also distinguished by its sleek, exclusive Space Gray enclosure.

The all-in-one computer is bundled with matching Space Gray accessories, including the Magic Mouse 2, Magic Trackpad 2, and a wireless Magic Keyboard with Numeric Keypad introduced at WWDC 2017 in June. 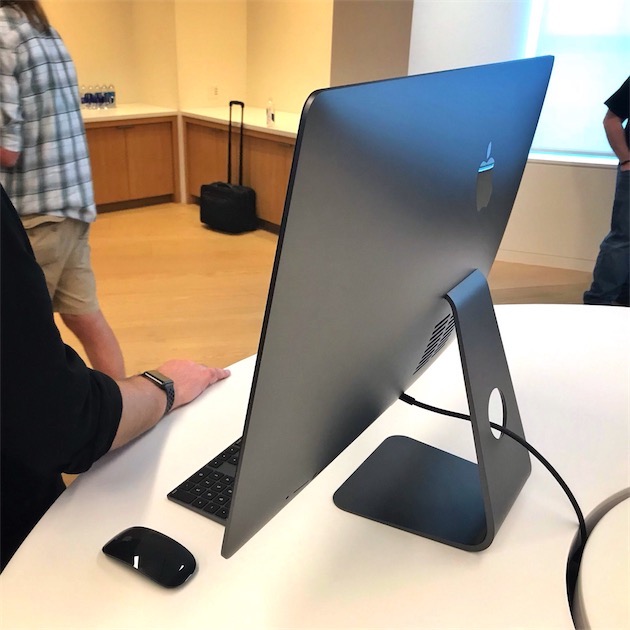 iMac Pro via Twitter user Chris Fenwick​
Apple said the iMac Pro will also feature up to an 18-core Intel Xeon processor, top-of-the-line Radeon Pro Vega graphics, up to 4TB of SSD storage, and up to 128GB of ECC RAM, with a starting price of $4,999 in the United States. 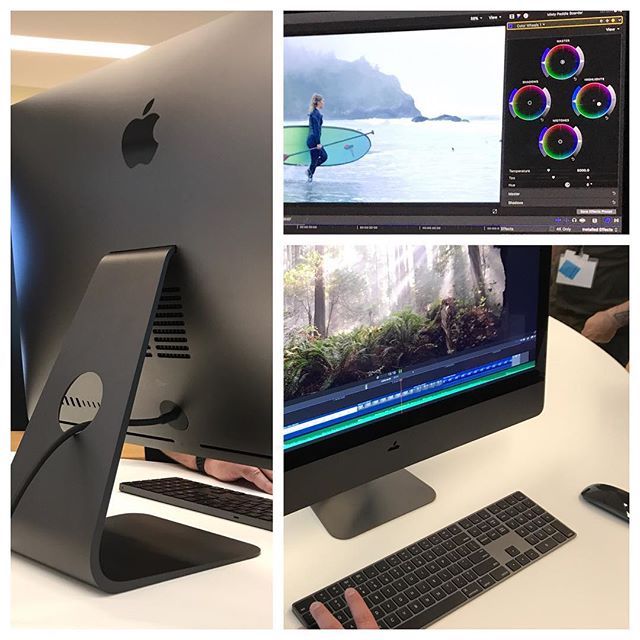 iMac Pro via Instagram user runehansen​
Final Cut Pro X 10.4 will include new color tools, like color wheels and a white balance picker. It will include support for HEVC, the new video format introduced in iOS 11 and macOS High Sierra, and direct import of iOS for iMovie timelines. The new version of the software will also support VR and HDR workflows.

I wish Apple would sell the space gray accessories so I could have ones that match my MacBook.
Reactions: LethalOptical, DeepIn2U, jimthing and 27 others
Comment

Yet another shade of Space Grey! It's much darker than the MacBook Pro.

I've started to prefer silver on the Macbook Pro again, I think it looks great on the new models, it makes the Touch Bar look like Porshe design (though i've gone for Space Grey anyway on the last two, silver next time)
Reactions: nvmls and Avieshek
Comment

The cost of an extra 4GB RAM module on Apple's store can be up to $200. Now imagine the cost of all the internal upgrades added together. That's where you get the $5000 price tag from.
Reactions: Ragnar51
Comment

But too expensive for my needs.
Reactions: DeepIn2U, stevekr, schneeland and 5 others
Comment

Shoooo, have to admit, it at least looks nice. Will now step aside to let "creative professionals" debate the relative merits (or lack thereof) of the internals.
Comment

maxed out config will cost you $100,000
Reactions: anthorumor, jimthing, -BigMac- and 11 others
Comment
H

GUYS does that mouse have a charging port on the front? Check the second photo
Reactions: 0958400, dabotsonline, EdRed and 3 others
Comment
D

Hey but can I get a space grey Magic Mouse standalone k thanks
Reactions: sartrekid and Macintoshrumors
Comment

I'm going to wait for the new Mac Pro, realise the same specs + new display cost £10,000 and then end up getting one of these buggers instead. Sigh.
Reactions: jimthing, StrangeNoises, amegicfox and 2 others
Comment
J

those who are using trackpad are all lefthanded
Reactions: LethalOptical
Comment

helyar said:
GUYS does that mouse have a charging port on the front? Check the second photo
Click to expand...

The Lightning port on Magic Mouse 2 is on the underside of the device. Can you believe it?
Reactions: dabotsonline
Comment

That black keyboard / mouse. I need it.
Reactions: LethalOptical, puckhead193, DogHouseDub and 1 other person
Comment

I don’t need an iMac that powerful but I do need that space gray magic keyboard and trackpad.
Reactions: LethalOptical, jimthing, mguzzi and 2 others
Comment

In order to increase the cooling, did they take away user-replaceable RAM???
Reactions: ruimpinho, dabotsonline, jwdsail and 8 others
Comment

dannys1 said:
Yet another shade of Space Grey! It's much darker than the MacBook Pro.

I've started to prefer silver on the Macbook Pro again, I think it looks great on the new models, it makes the Touch Bar look like Porshe design (though i've gone for Space Grey anyway on the last two, silver next time)
Click to expand...

Ugh Porsche Design. It is the Hugo Boss of industrial design. They only do brushed metal, grascale and black. They must only have grayscale monitors in the design office.
Reactions: jimthing, davidg4781 and dabotsonline
Comment

I don't understand this machine, at all. Zero upgradeability, literally none. I can (barely) understand this mentality in a MacBook Pro as you want to have it thin and light, but what's the reason you cannot even upgrade the RAM in this? Add a back panel, let us add more ram and an additional stick of NVMe storage.
Last edited: Oct 30, 2017
Reactions: RailroadXX, mw360, Minimum91 and 46 others
Comment

That looks beautiful. I'd gladly pay a $100 premium on a standard 27" iMac to have the Space Grey color-scheme applied (similar to the Black MacBook in 2010).

I don't need an iMac Pro but I'd love to have a Black iMac.
Comment

Definitely digging the space gray iMac Pro. Should be a great long-term desktop buy for those people who don't necessarily need the power it offers today, as it should last a good 5-7 years, especially given the shift to all solid state drives.

At $5k to start, it's certainly going to be an investment, but when you consider a single iPhone X can cost $1400, it makes the iMac Pro seem reasonable (even if unobtainable for most).
Reactions: dannys1
Comment
R

Nice machine, but for this day and age - it's insane.
Reactions: heffsf, Dingster101, anthorumor and 20 others
Comment

no matter what you call it and put in it. It is still an Imac that is difficult or almost impossible to upgrade. Apple proved that there is 5 year cycle and after there is no support for that device. 1000 euro per year (standard config) is ridiculous for normal people or small medium company. Interestingly Apple shows off Final Cut pro. Of course because there is nothing else. They killed Aperture entire Ilife experience was redesigned and features removed. I just wonder how quiet it is when GPU runs full power. SSD 1 TB is no go. What else is there?

PS: I have Upgraded Mac PRO from 2006. Who can beat this?
Reactions: 10 Speed, heffsf, dabotsonline and 9 others
Comment
T