Since at least 2004, Apple has offered a rebate program that has typically offered users a $100 rebate when they purchase a new Mac and an eligible printer directly from Apple. The program was typically offered as a three-month program that was consistently renewed upon expiration, although in recent years the company shifted toward a perpetual program while reserving the right to discontinue it at any time.

Effective Tuesday, January 17, the printer rebate will no longer be offered.

Monday, January 16 will be the last day customers can get a rebate on a qualifying printer when purchased with a Mac. Customers will have 90 days from the date of purchase to submit rebate claims. An additional 30 days will be given to correct invalid claims.

The Apple Retail Store and the Apple Online Store will continue to sell printers, albeit without a rebate offer.

U.S. and CA only: Wednesday, May 16 is the last day the online Apple Rebate Tool will be available to submit rebates. Customers should submit their claims according to the terms of the promotion.
Click to expand...

Apple previously offered a number of rebate programs on various products, but with the discontinuation of the printer rebate program, it appears that the company has eliminated rebates entirely. iWork and MobileMe rebates disappeared in April 2011, and the company had previously offered rebates on the products such as Mac OS X and iLife combination purchases, Mac OS and Microsoft Office combination purchases, and others. Apple previous Back to School rebate program has also been replaced with an iTunes Store/Mac App Store gift card. 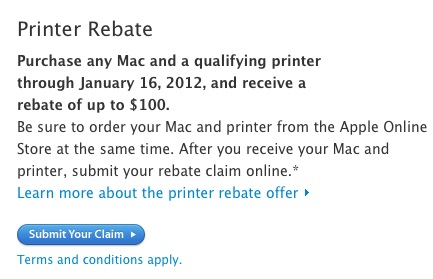 Apple continues to offer several printers as optional add-ons when configuring a new Mac in the online store, specifically promoting AirPrint-compatible models, but the printers are being offered at regular retail prices with no promotional rebates or other discounts.

Well I must say that I'm not overly surprised, but still sad ... it is how I helped pay for my Mac - buying the printer and then selling it for $40 or $80.

Ha, I remember listing a half dozen printers on eBay at one point, all acquired through this promotion. They never did sell for very much Apple's prices were quite inflated, so the $100 rebate was more like $40. Usually not worth the effort of selling it. A nice bonus though if you intended to use it.
C

Throwing out a random association, I wonder if the cancellation of all these rebate programs is to set the stage for initiation of dividends as Apple's profit redistribution mechanism? ie. giving back to shareholders instead of customers. Although many people are part of both groups of course.

Be assured, the $100 rebate was making Apple money. It would have stopped the program because it stopped making money on it.
P

I'm not saying people weren't taking advantage of this, but I've never in my life bought a printer with a computer (whether PC or Mac). The "bundled" printers were always over priced to begin with (thus making the rebate really worth half as much) and they generally were complete crap. I bought a laser printer all-in-one 6 years ago and have never needed to "upgrade" to a crappy ink-jet. And yes, I know some people would turn around and sell them, but for what profit? If you could buy said printer for $150 at **insert office supply store here*** instead of $200 at Apple, the best you are going to get is may be $125 on Craigslist, thus making your total profit $25. Never seemed worth it to me.
D

ideal.dreams said:
Geez, ever hear of the print screen button?
Click to expand...

It was most likely an internal memo sent to Apple retail stores... really wouldn't be a wise decision to take a screenshot of a confidential document, and email it to yourself on a work computer...

I never took advantage of that rebate, so no biggie.
I do like the free ipod back to school promos though.
R

Couldn't tell you the last time I needed a printer at home...I just take most stuff digitally with me now. If I need something printed...which is super rare, I just print it at work.

This is just a part of Apple's wider efforts to stop the biggest competitor to the iPad: printed paper.

I think it likely has more to do with the fact that people are printing less and less. I even take my iPad on interviews instead of a hard copy of a pitch or resume, and it always pleases people that I am avoiding wasted paper.

I guess Apple must really be hurting for money

ideal.dreams said:
Geez, ever hear of the print screen button?
Click to expand...

You're on a Mac forum. No such thing as a Print Screen button (that's a Windows function).

Printers are fast becoming unnecessary. I file most documents in an electronic format with redundant backup. I can't remember the last time I used my printer, and my poor file cabinet is filling with junk instead of papers.

Banks, teachers, employers all accept electronic documents as a matter of course. About the only time I print a page is to sign something, then I have to turn around and rescan it into digital form to send it in.

Print photos? Why? I can get a much more permanent copy of a picture my digitally submitting it to Walgreens or Costco and getting a real photographic print. It costs pennies a print and I can usually pick it up within about half an hour or so.

It's not a surprise that Apple is discontinuing the printer rebate. Printers cost next to nothing these days anyway. It's the ink/toner where they get you.

Not to mention the iPad 3 coming in February.

How can you possibly link rebates to a dividend?

Am I the only one that finds it slightly odd that this comes on the eve of the Apple "Print"/Education Announcement?

Well I guess we'll see if Apple announces anything to do with this at the education event.

It was nice back in the day getting a "free" iPod Touch and printer when you bought a mac as a student. Now it looks like no printer and maybe the iTunes gift card if they keep doing that.

Maybe they will just start giving out iPad 2's with student mac purchases instead (When the iPad 3 is out of course.) Or at least heavily discount them when purchased together.
K

re: printers dying off

It depends, I guess. I still make somewhat regular use of my printers at home. For starters, I have a side business doing on-site computer service and I usually print out paper invoices before I arrive. That gives me the double-benefit of having their street address (and phone number) handy to punch into my car's GPS to find them, and a receipt to leave them with when I'm finished.

Sure, some customers are just as happy getting an invoice emailed to them later that day or evening - so I do that when the situation warrants it. But just as often, I'm dealing with people who aren't real computer-savvy to begin with. If I did email them an invoice, they'd simply print it out anyway to put it in a paper filing cabinet or folder.

I've also used my color laser printer to make my own 3-fold brochures and business cards, saving money over having them made up professionally. I've definitely gotten a few new regular customers from handing those out, making it well worth the initial effort and expense.

That said, I agree that Apple ending this printer rebate isn't any big deal. I think I took advantage of it once before, just to get one of the cheaper inkjets that wound up being practically free. But like others, I just resold it to someone else (probably netting about a $40 profit when all was said and done). I'd have preferred Apple just knock $100 off the price of the machine instead!

I think it's too bad. I know this marks me as an unsophisticated boob, but the Canon all-in-one printer that I received is perfect for my needs - which are minimal.

For example, in my work, hard copies are required by Medicare, they do not use electronic transmission yet. I am required to have hard copies of all my paperwork.

For some of us, the freebee printer was a nice little bonus. I realize for more sophisticated users, the printers offered were not up to their needs. I mean, mine is not even wireless!

But for some, it meets our needs.

Makes sense, given Apple is having a rough year financially.