Apple will release a new MacBook Air at the end of the third quarter, according to Taiwanese research firm TrendForce. That lines up with either September or October, depending on how the wording is interpreted. 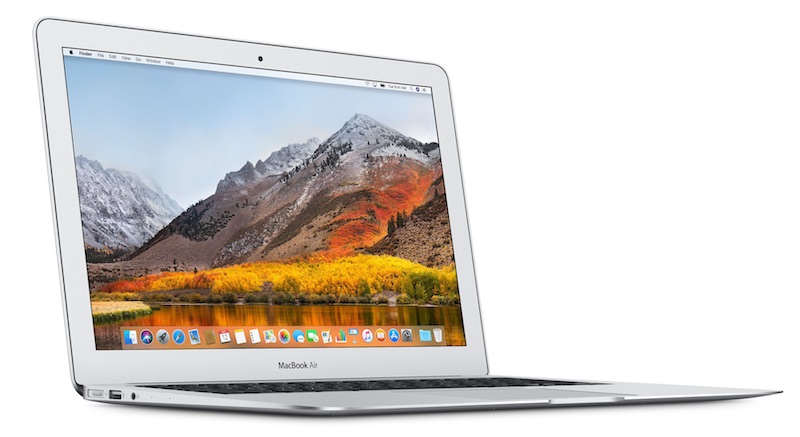 TrendForce also refers to a new MacBook Pro in future tense, but it is surely referring to the models released in July, when the third quarter began:

The second quarter was the transition period when Apple was preparing for the releases of the upcoming new MacBook devices for the year. TrendForce therefore expects MacBook shipments to again post a large QoQ increase in 3Q18, as Apple will be releasing a new MacBook Pro at the start of the quarter and a new MacBook Air at the end of the quarter.
Click to expand...

The report does not provide additional details, but both Apple analyst Ming-Chi Kuo and Bloomberg News reporter Mark Gurman expect Apple to release a new entry-level notebook later this year, and they are two of the more reliable sources as it relates to Apple's upcoming product plans.

TrendForce specifically says it will be a new MacBook Air, but Kuo and Gurman have not identified what branding the notebook will have.

Earlier this year, DigiTimes claimed that Apple will release the first MacBook Air with a Retina display in the second half of 2018, and noted that it will be a 13-inch model in a separate report. This week, it said Quanta will assemble new "inexpensive notebooks" from Apple in the fourth quarter.

Whether it turns out to be a MacBook, MacBook Air, or something else, Gurman expects at least one of the entry-level notebooks, if there are more than one, to have a starting price of $999 or less in the United States.

The current MacBook Air hasn't seen any substantial updates in over three years. Since that time, Apple has discontinued the 11-inch model, while the processor on the base 13-inch model received a minor bump in clock speed, but it's still a Broadwell chip from the 2014-2015 timeframe.

Apple could announce availability of a new MacBook Air via press release at any point this fall, or save it for a September or October event. At this point, we lean towards an October release, as the September event should be busy, with a trio of new iPhones, Apple Watch Series 4 models, new AirPods, and more.

With refreshes to other Macs expected later this year, including the iMac and Mac mini, and a widely expected iPad Pro with Face ID, Apple may have enough in its pipeline for an October event, which it last held in 2016.

It doesn't make sense to keep using the Air moniker

It's either Pro or non-Pro

Another great addition to the lineup.
Reactions: Mr. Donahue

Can't wait to see the update to this solid, classic design. It will be hard to top!
Last edited: Aug 15, 2018
Reactions: MacRazySwe, Mr. Donahue, kironin and 3 others

With zero ports and inductive charging.
Reactions: pmore, iLLUMI, xalea and 14 others
A

Expect it at an October Mac event. They've had a 'Back to the Mac' event in the past but I think this years event deserves that title more than any other event in the past.
Reactions: fastasleep and the future
T

agsystems said:
"Gurman expects at least one of the entry-level notebooks to have a starting price of $999"

All anyone has
Ever asked for is a MacBook Air with a retina screen.
Reactions: Hevelius, tresmith, pmore and 28 others

wlossw said:
All anyone has
Ever asked for is a MacBook Air with a retina screen.
Click to expand...

They should rename the current macbook the Macbook Air since it sacrifices performance for weight and portability (as light as air!). And this new version of a budget laptop rumored to be introduce this fall should be called just Macbook since it will likely fall somewhere in the middle between the Air and the Pros in terms of mobility and performance.

I’m excited for this holiday season. Probably say that every year, but all these updates sound promising.

mithion said:
They should rename the current macbook the Macbook Air since it sacrifices performance for weight and portability (as light as air!). And this new version of a budget laptop rumored to be introduce this fall should be called just Macbook since it will likely fall somewhere in the middle between the Air and the Pros in terms of mobility and performance.

This would be more logical to me at least.
Click to expand...

If they put a Retina display in the Air and reduce the bezels I think they would sell like hot cakes.

It may even be made thinner and lighter and added to the MacBook line up instead. The 12” MacBook is then dropped in price too the rumoured $999 like Mark Gurman reported.
Reactions: MacRazySwe, DonRivella, MarkIII and 2 others

Time to see what the future holds for the Apple laptops. Hopefully this new Air will not come with the ****** keyboard.
Reactions: Hevelius, joy.757, George Dawes and 7 others

Perfect for back to school... next year.

This consumer-focused MacBook is what I'm most excited for this fall. The existing product lineup for Apple's consumer notebooks is an awkward mess. 13" dinosaur MacBook Air, 12" MacBook that is as expensive as the neutered version of the 13" MacBook Pro. Yuck. I love the 12" MacBook, but I hope they throw all 3 SKU's away and release something clean and new like this:

13" MacBook starting at $999
So basically, this is the "Retina MacBook Air" that people have really wanted for years. This approach would provide a great consumer notebook option that can fill the $999-$1,499 price range before you enter MacBook Pro territory. It would also provide symmetry with the iPad product line which features a single "iPad" followed by two iPad Pro models, while maintaining the distinction that iPads are <$1,000 and Macs are >$1,000. Clean, simple, and makes sense. Hope it happens.
Last edited: Aug 15, 2018
Reactions: tresmith, martyjmclean, Mmckee1217 and 2 others

There's no way there's going to be a MacBook Air with a retina screen. That would completely defeat the purpose of the MacBook.

If the MacBook Air is kept separate from the MacBook, it will continue to be a low-budget option with a non-retina screen, I'm sure of it.
Reactions: Textime, potatoman93, BODYBUILDERPAUL and 3 others

Isn’t Septmeber Q3 and October Q4? If it’s only a small update I could easily see them announcing at the September keynote alongside the iPhone, IPad Pro and Apple Watch Series 4.

Will be the best thing to come from Apple for four years SAY NO TO USB-C
Reactions: ignatius345

Let's see how the base model ships... that is Apple's trick.
They are now shipping base Macbook pros with 8Gb Ram and 128 internal HD. And that is Macbook Pros... imagine what will be the specs for base Air models..

Dave245 said:
If they put a Retina display in the Air and reduce the bezels I think they would sell like hot cakes.

It may even be made thinner and lighter and added to the MacBook line up instead. The 12” MacBook is then dropped in price too the rumoured $999 like Mark Gurman reported.
Click to expand...

The MacBook Air is the only MacBook line that has an TN Screen. And they are cheap. Even if Apple does 1080P Res, which arguably is not Retina for Apple would still be much better.

But than when Chuwi release a Notebook [1] for $300 and it is half decent. I believe there is no reason why Apple cant do a cheaper MacBook, with Retina Screen for $799. And the MacBook Needs a 14" Res version. ( Speaking of which reminds me of a thread )

[1] https://www.anandtech.com/show/13211/chuwi-launches-the-lapbook-se-gemini-lake-and-ssd-for-300
Reactions: booksacool1
You must log in or register to reply here.