Panic's file management app Transmit made its way to iOS with the launch of iOS 8, bringing several useful capabilities that took advantage of iOS features, including "Extensibility" options that let any app upload files to a server using Transmit and a "Send" feature that let files be shared to multiple services like Dropbox and iCloud Drive.

As of last week, the function that let files be sent to Dropbox or iCloud Drive was removed from Transmit, at the request of Apple. As Panic explains in a blog post, Apple has asked the company to remove the "Send" feature from Transmit because Apple's rules state that apps cannot upload content to iCloud Drive unless content was created in the app itself.

In short, we're told that while Transmit iOS can download content from iCloud Drive, we cannot upload content to iCloud Drive unless the content was created in the app itself. Apple says this use would violate 2.23 -- "Apps must follow the iOS Data Storage Guidelines or they will be rejected" -- but oddly that page says nothing about iCloud Drive or appropriate uses for iCloud Drive.
Click to expand...

Though Panic is only barred from uploading files to iCloud Drive, the company says that it was forced to remove the "Send" feature entirely because the Share Sheet used to send documents to other services automatically lists iCloud, and it can't be altered. 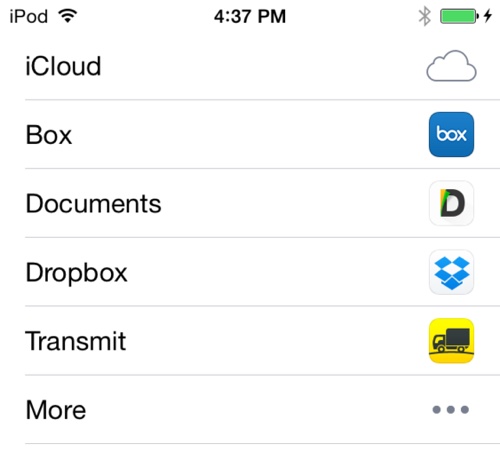 Immutable Share Sheet in iOS 8​
​
By barring Transmit from uploading files to iCloud Drive and providing a Share Sheet that cannot be modified, Apple has effectively blocked Transmit from being able to send files to other third-party services like Box, Dropbox, Evernote, and more.

Panic is hoping that its blog post will attract the attention of Apple employees who may be able to fix the frustrating position Apple has put the company in, either through making the Share Sheet alterable or by simply allowing Transmit to upload to iCloud Drive.

iOS 8 brought quite a few changes to iOS, including Notification Center widgets, third-party keyboards, and deep integration between apps in the form of extensions. Apple has had difficulty sorting out how it wants various features in iOS 8 to be used, however, and the company's indecision and its unclear documentation has led to several instances where developers were asked to remove key functions from their apps.

Useful Notification Center widget Launcher was pulled from the App Store in September, and more recently, Apple has asked apps like Neato and Drafts to remove widget functionality that violates the company's guidelines. There is some hope for Transmit, however, as Apple has reversed course on one notable removal request. In late October, Apple asked calculator app PCalc to remove the calculator functionality from its Notification Center widget, a decision that was later reversed after the issue received significant attention.

Transmit can be downloaded from the App Store for $9.99. [Direct Link]

One more reason not to use iCloud Drive. This is utter bollocks.

MacRumors said:
By barring Transmit from uploading files to iCloud Drive and providing a Share Sheet that cannot be modified, Apple has effectively blocked Transmit from being able to send files to other third-party services like Box, Dropbox, Evernote, and more.
Click to expand...

omg. Apple really thinks they accomplished something amazing and revolutionary with iCloud Drive dont they?

They are the Kim Jong Douche of Cloud Services

Apple, can I just use my iCloud drive like I want to, and not like you want me to?
F

Seriously?
I'm kinda thankful that Apple didn't buy Dropbox. Just thinking of what they would have done with that great service scares the s*** out of me

Apple employees need to agree on what is and isn't allowed before accepting apps or trying to pull them. All they're doing by removing previously allowed features/widgets is making steps backwards.

I wonder what Apple's overall strategy behind these bizarre restrictions is.

It seems they want to break iOS just enough to keep it from becoming a perfect system to accomplish everything we need.

It's always seemed this way for years.

yet again another surface example of the disorganization running deep at apple.
M

This isn't the first time that Panic was screwed over by Apple.

"Oh, hey Cabel! Nice to meet you. So tell me, what'd you think of iTunes?"

"Well, I think it looks great! You guys have done a great job with it. But, you know, I still feel we'll do all-right with Audion."

"Oh, really? That's interesting, because honestly? I don't think you guys have a chance."
Click to expand...

Edit: Ok Apple didn't screw Panic, they had a chance to meet with Apple to make Audion into iTunes, and they turned down the meeting.

I wonder if there is a workaround? Is there a local storage option within the Transmit app container, then just transfer to a iCloud drive from there?
F

Advice to everybody:
Disable Automatic App Updates on your iPhones.

I just wish they would have written the blog post earlier, before the update hit the app store.
I just went to Settings/Automatic Updates and turned it off.
But unfortunatelly, the update already went through on december 5th, so already have the crippled version.

/s
I know the reason. They intentionally cripple iOS, because they think if they would let the developers do all the things that are technically possible with their SDK, iOS would become market leader again and in near future a quasi-monopoly. and then they'd have the government to fear.
That's why they keep iOS on the leash, so android doesn't die out
s/

Paddle1 said:
Apple employees need to agree on what is and isn't allowed before accepting apps or trying to pull them. All they're doing by removing previously allowed features/widgets is making steps backwards.
Click to expand...

I am guessing that, with the large amount of apps that get submitted, there is some (probably a lot) of automated acceptance/denials that happen.

You are not wrong, by the way. There is far too much inconsistency. But I just don't think that everything is looked at by an employee, especially if it happens to be an update to soemthing that has already been on the appstore for some time.
S

One more reason not to use iCloud Drive. This is utter bollocks.
Click to expand...

Completely agree. It's like they don't realise they have any competition.
S

And people continue to support this company as they slowly take away things..... lol
M

Why is Apple trying so hard to make iCloud unusable?

I was so excited about iCloud Drive when it was first announced, but honestly Dropbox continues to be a much better option in many ways. I'm not sure why Apple feels the need to restrict iCloud in ways that end up making it more confusing and difficult to use for consumers.

BTW: Transmit is a really awesome FTP client for iOS and OS X (you can sync bookmarks between the two)
N

zorinlynx said:
I wonder what Apple's overall strategy behind these bizarre restrictions is.

It seems they want to break iOS just enough to keep it from becoming a perfect system to accomplish everything we need.

It's always seemed this way for years.
Click to expand...

Unfortunately, with iOS8 it seems Apple is putting extra effort into crippling the user experience. I don't think even Apple knows why Transmit shouldn't be able to transfer files to iCloud Drive. Maybe Apple has ban on too useful third party features aka its a feature Apple wants to present with next major iOS version...

That sucks because it was the only reason I bought Transmit. So we can get a refund now, right? Although Transmit already sucked at iCloud Drive stuff before this. Probably Apple's fault though. I could never get Transmit to open any files from iCloud Drive, much less save anything to it. It usually just crashed or pretended like it was doing something and then didn't. iCloud Drive really is a fail. I've never been able to get the photo capability to work. Why is Apple so great at making beautifully designed hardware and software, and yet so utterly and completely hopeless when it comes to services? As a huge Apple user it's the most annoying thing that I deal with every day.

Years ago I wanted a phone with a large display so I bought an Android phone and thought, I will go back to iOS when they have bigger phones. Now we have the iPhone 6 but I lost interest.

iOS is way too restrictive and limited. My iPad Air is a great newspaper reader and media consumption device. But sadly, that's about it.

. So I don't feel the need to upgrade in future. With those software handcuffs in place and the minuscule OS upgrades, my iPad Air will do just fine.
You must log in or register to reply here.

iOS 14: A Quick Tour of All the New Features