In the latest iOS 12.2 beta, Apple has introduced four new Animoji characters that can be used in the Messages and FaceTime apps. The new Animoji include a giraffe, a shark, an owl, and a boar. 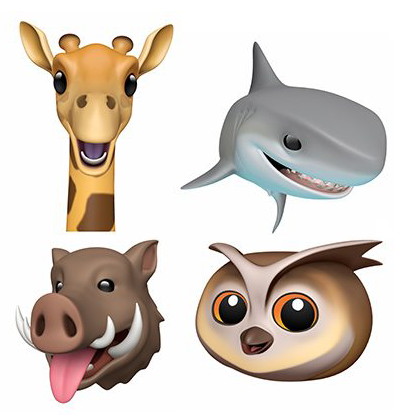 Animoji are designed to work on devices with a TrueDepth camera system, which now includes modern iPhone and iPad Pro models. Animoji are animated, 3D emoji characters that you control with your face.

When you use an Animoji, the TrueDepth camera nalyzes more than 50 muscle movements in different areas of the face, detecting movement of the eyebrows, cheeks, chin, eyes, jaw, lips, eyes, tongue, and mouth.

All of your facial movements are translated to the Animoji characters, making them reflect your expression and emotion. Animoji can be shared with friends in the Messages app as stickers and as videos, they can be used with the Effects camera in Messages, and you can use them instead of your own face when FaceTiming someone.

When Animoji launched in 2017 alongside the iPhone X, there were 12, with Apple steadily adding new fun characters to play with.

Where's the rhino?
Reactions: 0958400, UberTiger, Precursor and 7 others
Comment
M

Yes, they can release these AND work on the Mac.
Reactions: chilly willy, orbital~debris, martyjmclean and 14 others
Comment

Nice I guess. Wish they put as much of an effort in making their gear great again to justify the premium prices.
Reactions: SetRen68, 0958400, Glideslope and 27 others
Comment

I pretty much stop using animoji after like a week or two. Regular emojis are more convenient and effective.
Reactions: 0958400, BoricuaHec01, Glideslope and 12 others
Comment
T

How about providing a better voice message quality?
It sounds like a radio from the 60s. Apple has lost the focus on main communication.
Last edited: Feb 4, 2019
Reactions: 0958400, diego, matticus99 and 8 others
Comment
K

The égyptiens were right.
Reactions: 0958400, martyjmclean, HJM.NL and 1 other person
Comment
B

This utterly pointless incrementalism will be Apple’s downfall.

How many people are actually excited about this, 4?
Reactions: 0958400, scottsjack, NIKKG and 15 others
Comment
N

This feature is mostly filler
Reactions: sdz and MarkB786
Comment

I want Pennywise the Evil Clown! And an Australian Funnel-web Spider face with lots of eyes and huge fangs.
Reactions: 0958400, HJM.NL, martyjmclean and 1 other person
Comment

Baymowe335 said:
Yes, they can release these AND work on the Mac.
Click to expand...

Oh really?
Is that why....
1) Every new Mac mini 2018 has Bluetooth interference issue that still can’t be fixed
2) Every single laptops sold by Apple comes with a keyboard that inevitably fails due to dust accumulation
3) iMacs from 2 years ago are still being sold at their original price, with no update in sight
Last edited: Feb 4, 2019
Reactions: pmore, 0958400, greenmeanie and 23 others
Comment
V

This is actually a great way to get everyone to upgrade. I would always bundle a lot of security fixes with new emojis.
Reactions: DemianM, orbital~debris, martyjmclean and 1 other person
Comment

bgraham said:
How many people are actually excited about this, 4?
Click to expand...

bgraham said:
This utterly pointless incrementalism will be Apple’s downfall.

How many people are actually excited about this, 4?
Click to expand...

Not sure, maybe 20 million of the billion+ iOS devices? That’s my estimate anyway; a lot of kids do have iPhones, but surely not a high percentage have XR/X/XS/XS Max/2018 iPad Pro.
Comment

If an owl is nocturnal, then dark mode must be imminent! Who needs Gurman over at Bloomberg when its right in our faces
Reactions: orbital~debris, martyjmclean and GrumpyMom
Comment
M

Meanwhile, those waiting for AAPL to add support for 10-bit color Capture & Display (i.e., DEEP color) continue to wait ... March 2016 till now is really too long to wait.

That's in comparison to sRGB.

So, from then till now, nothing on the DEEP color front !

Cosmosent said:
Meanwhile, those waiting for AAPL to add support for 10-bit color Capture & Display (i.e., DEEP color) continue to wait ... March 2016 till now is really too long to wait.

That's in comparison to sRGB.

So, from then till now, nothing on the DEEP color front !

What is wrong with you people?

Apple has been innovating. That’s why people copy the Apple Watch, AirPods, Notched Design, folder icons, even Animoji’s. Because Apple is ahead of the game and does it better than anyone else.

You want 10bit color, some of us want 120hz.
Reactions: orbital~debris and J.J. Sefton
Comment

Beat me to it. Bet it’ll go viral if someone does it, lol.
Reactions: HJM.NL
Comment

This is the **** Apple chooses to invest r&d money into? smh
Reactions: Steven., greenmeanie, George Zip and 4 others
Comment
C

Nice! Me and my family love using the Animojis!

People need to calm down! If you don’t like them, don’t use them.
Reactions: orbital~debris, J.J. Sefton, martyjmclean and 2 others
Comment
A