Apple Music is available on the PlayStation 5 from today, offering the first fully integrated Apple Music experience on a game console, Sony has announced. 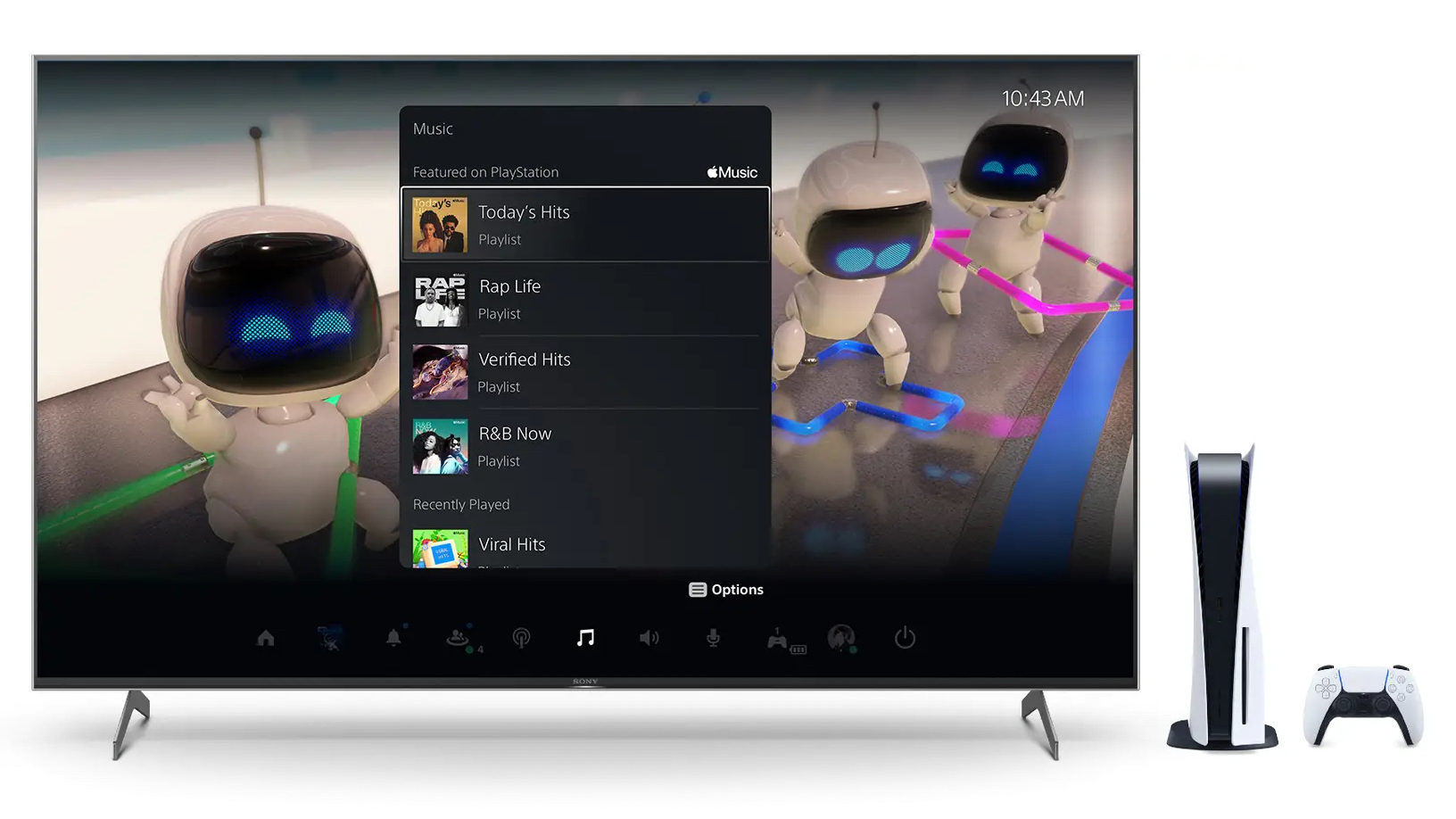 The news comes after weeks of the Apple Music app intermittently appearing for PS5 users with no official word on the development from Apple or Sony. Apple Music on the PS5 allows subscribers to play more than 90 million songs, as well as a host of curated playlists and radio stations directly from their console. The app also supports music video playback in resolutions up to 4K.

Apple Music allows users to listen in a variety of ways, including in the background or during gameplay. Music videos also support continuous playback when navigating to and from the Apple Music app. 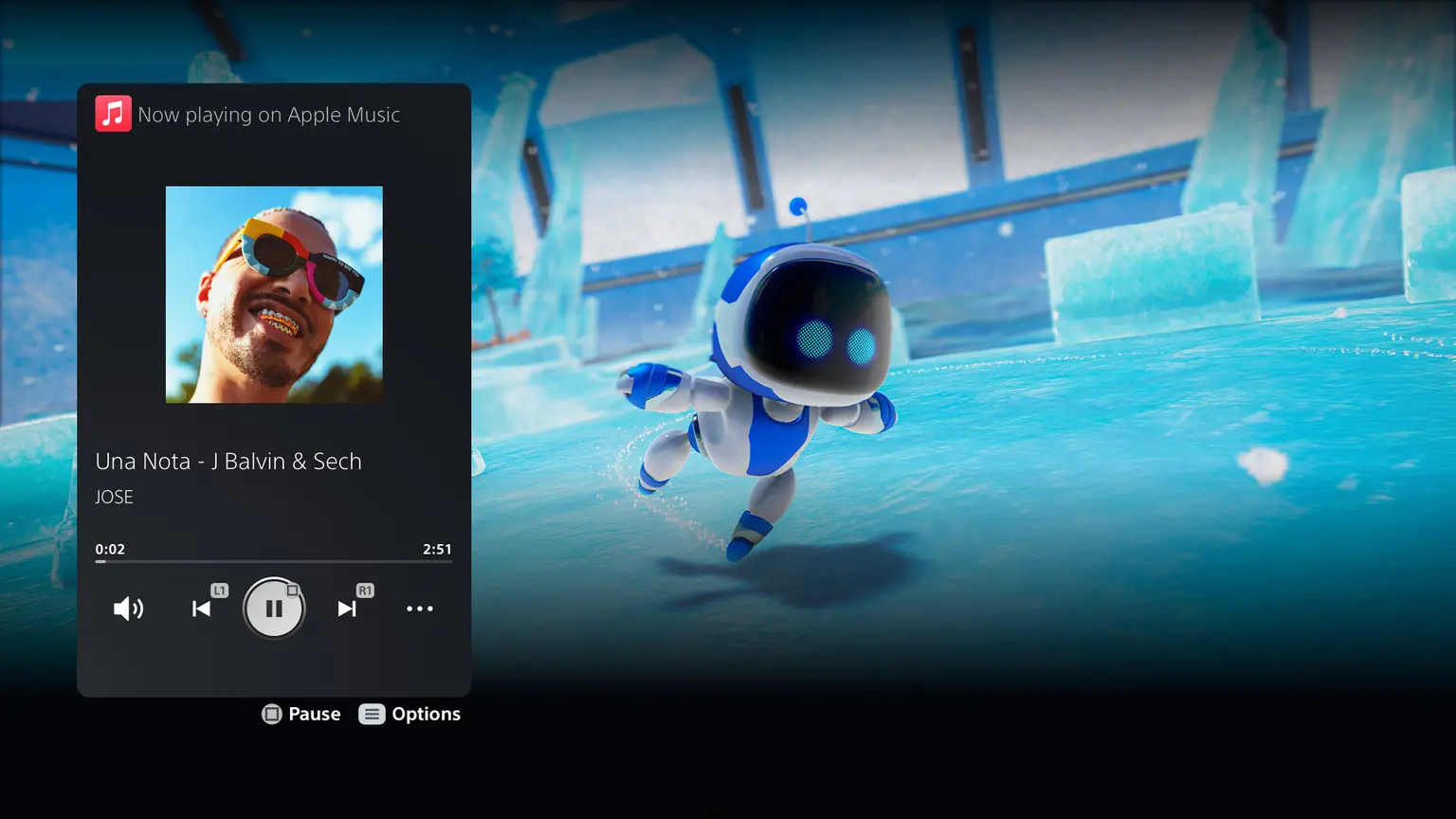 PS5 users can download the Apple Music app from the Media space and simply need to follow the on-screen instructions to link their Apple Music account. The process involves either scanning a QR code from an Apple device or manually entering Apple ID credentials. Apple also today updated its support document for Apple Music on Smart TVs to include game consoles.

Finally! I’ve been a bit jealous of Spotify being able to play in the background of gaming, and now us Apple Music subscribers can give it a try! ?
Reactions: Nica, Karny, Antes and 8 others

Apple can (and I´m sure will at some point), update the third party Apple Music API to allow lossless and/or Atmos.
Reactions: SFjohn, michaelnugent, Preed08 and 2 others

Wow! Hopefully Apple continues to invest its time on gaming. This is a good step forward.
Reactions: svish, michaelnugent, darkslide29 and 1 other person

And they still don't have a Windows app.
Reactions: iMobile and darkslide29
T

Let me output the PS5 sound to HomePods and I'm made up
Reactions: KenaiAndrews and Razorpit
N

Is it available for the Series X yet?
Reactions: mrchinchilla

nfl46 said:
Is it available for the Series X yet?
Click to expand...

Yeah, that’s what I’m looking forward to. It’s gotta be coming soon with this news!
C

If only you could find and buy a PS5.
Reactions: nickgovier, Nica, Bow Commander and 12 others

threluja said:
Let me output the PS5 sound to HomePods and I'm made up
Click to expand...

Hopefully the unannounced (tongue in cheek) "HomePods Pro" will allow you to connect devices like the PS5.
Reactions: threluja

Literally just had "ours" delivered an hour ago. It's a Christmas present for my son and I. He doesn't know he's getting it.

Sony sent me an email with a special event/online sale. You had to have a PS Plus account though to order.
Reactions: orbital~debris
D

Will this work for ps4? Been wanting Apple Music on PlayStation for awhile, hope it works for ps4

Can't wait to hear the reasons why this isn't available for PS4.
D

Who would've thought we'd see the day where Apple's apps show up on gaming consoles? Color me surprised.
Reactions: GregoriusM and jimbobb24

Yes! Nice collaboration, Apple & Sony ? I was playing some Plants vs. Zombies last week and recall thinking it would be great to be able to listen to some music (but I'm not a Spotify user and not about to start now!). Glad the rumours were true.

Music will be a really great addition to a stellar games console!
Last edited: Oct 27, 2021
Reactions: Nica, jwalesh96, KeithBN and 1 other person
M

I never thought I'd see the day. This is great!
Reactions: GregoriusM, performa_6400 and darkslide29
B

I wonder is it possible with EARC?
Because that's how my Homepods are connected to my PS5, and also I can always just play music from my apple tv and switch to the PS5 and it keeps on playing.

What I'd like is Sony and Apple work so I can just connect my homepods to my PS5
Reactions: B/D
S

Allegedly Steve Jobs thought about putting macOS on Sony‘s laptop line. Again he was allegedly impressed with their hardware. Sony reminds me of Apple. Apple could buy them like 10 times over though lol.
Reactions: nickgovier, Razorpit and orbital~debris

Confirmed no Atmos/Lossless on PS5 but to be honest that is no surprise as the PS5 only supports Atmos via BluRay HDMI audio pass through.

Hopefully the Xbox Series consoles get Apple Music soon and hopefully due to Microsofts licensing of Atmos and Vision for the Xbox Apple Music might have full Atmos support from the word go, the Xbox has full Atmos support activated via Dolby’s app and is on at all times too. Xbox also does a Dolby surround up mix built in to upscale non Atmos content to Atmos too.
Reactions: GregoriusM and mrchinchilla
R

threluja said:
Let me output the PS5 sound to HomePods and I'm made up
Click to expand...

Is this not doable with the newest Apple TV (HDMI ARC)? Genuinely asking.
C

Lets hope Apple will be as aggressive about being everywhere as Spotify is. That's their only way to make inroads against Spotify. The only condition in which I'm leaving Spotify is if I can seamlessly throw music to any device in my house, like Spotify can while enabling the level of remote control Spotify does.

The most important thing in the Spotify product is how brilliantly its been engineered. They've taken a function over form approach and my entire family loves using it. I'd love to leave Spotify, but Apple does not have the functionality Spotify has and Airplay is not the answer.

There's something that Airplay does that is just too close to the system level. I cannot stand using it because I have no idea what I do on my phone will disrupt the playback on where the media is being played. The system volume controls are hijacked and I can't stand how when I use airplay for lets say, Disney+... I can't continue to use my device for anything else. I can't just toss a movie on my TV for the kids and go back to work with my phone.

Spotify lets you just pick a device signed into Spotify and leave it at that. There's none of this messy intermingling of my phone trying to figure out what I'm trying to control.

If Apple wants my business they need to figure out Airplay or do cloud based client session control like Spotify, and it needs to be available everywhere.
Reactions: cashville2400, TheMountainLife, Da_Hood and 4 others

I know right, its been a year since the PS5 was released and its still almost impossible to get one when stocks are released. Just ridiculous, and practically the same for the XBOX series X, although Xbox series S are generally in stock.
Reactions: TheYayAreaLiving 🎗 and Tech for Kings
J