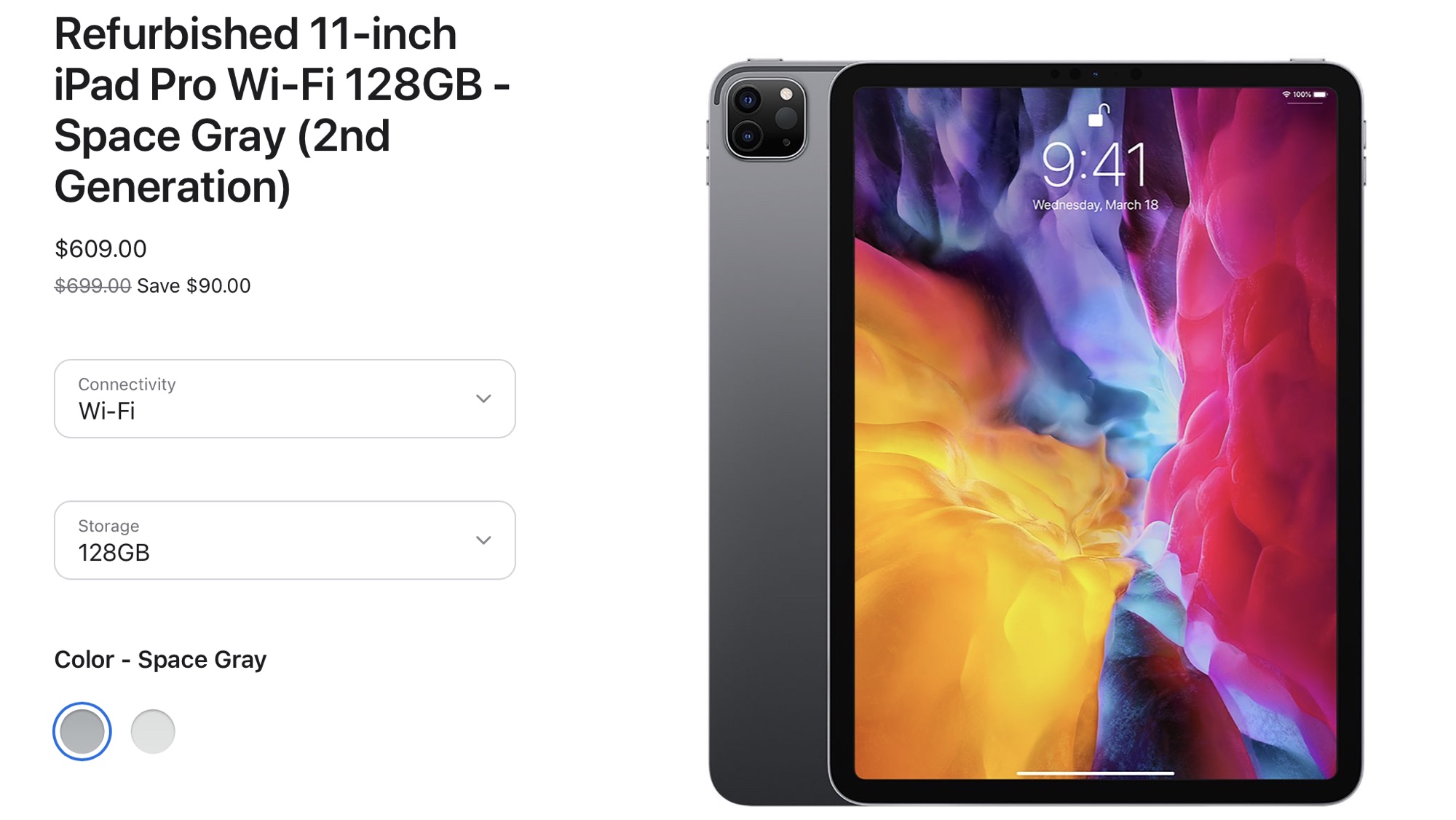 The 2020 iPad Pro models preceeded the M1 iPad Pro models and introduced new camera technology with an included LiDAR Scanner for depth-sensing capabilities. These iPads are equipped with the A12Z Bionic Chip, an iterative update to the A12X chip that was used for the 2018 iPad Pro models.


https://twitter.com/i/web/status/1424839651328679943
At the current time, Apple is offering several different colors and capacities, though stock will fluctuate over time. The refurbished 2020 iPad Pro models are being sold alongside older models in the refurbished store.

All of Apple's refurbished iPads are sold with the same one-year warranty that's provided with a brand new device, along with all manuals and accessories. Refurbished devices go through a rigorous testing, repair, repackaging, and cleaning process and are identical to new devices.

dguisinger said:
So.... These probably are the units returned by people who were disappointed by the lack of pro OS and application features at WWDC?
Click to expand...

No, these are last years 2020 model with the A12Z chip and LiDar. Not the 2021 M1 models.
Reactions: TheRoadRunner, KeithBN, Kengineer and 6 others
D

Can anyone advise between this and the iPad Air 4th gen? I think this one is a better deal but curious if anyone else has thoughts.
Reactions: nrose101, peanuts_of_pathos and thekaiju

Wow, does it usually take this long to get refurb models in? I thought they were usually 6-8 months post launch. Here we are getting refurbs after next years model.
Reactions: amartinez1660

Where are the Apple faithful assuring us how good a deal this nonsense is?
Reactions: ChrisMoBro and peanuts_of_pathos
C

Big saving if your looking at the 1TB model; quite tempted as I can't justify the M1 iPad Pro when I've already got an M1 Macbook Pro
Reactions: peanuts_of_pathos and AxiomaticRubric

2017 iPad Pro 10.2 still going strong on my end too!
Reactions: macfacts, peanuts_of_pathos, katbel and 2 others
B

Not worth it—maybe at $250 off. Better to catch a sale on the new model.
Reactions: amartinez1660 and dominiongamma

I’ve got a 2018 iPad Pro and it’s still super quick and would do absolutely everything the latest M1 Pro would do but maybe just a tiny fraction slower.

Notwithstanding the new miniLED screen, to me this is just a testament to how much of wasted potential there is in iPadOS + M1.
Reactions: tivoboy, doolar, Johnny907 and 3 others

This is probably how I’m going to purchase my iPad Pro when it’s time to upgrade from my 2017. I’m over the days of the fancy box especially if it’s been tested and certified by Apple itself.
Reactions: CoMoMacUser, amartinez1660 and AxiomaticRubric

Mr. Dee said:
This is probably how I’m going to purchase my iPad Pro when it’s time to upgrade from my 2017. I’m over the days of the fancy box especially if it’s been tested and certified by Apple itself.
Click to expand...

People buy pre owned cars every day, and trust their life with it.

Im sure you will be fine with a second hand tablet lol
Reactions: jimmy_uk, tonyisit, hagar and 2 others
R

bostonsox said:
Can anyone advise between this and the iPad Air 4th gen? I think this one is a better deal but curious if anyone else has thoughts.
Click to expand...

I’d go with the pro. 6GB of ram vs 4GB on the air.
Reactions: peanuts_of_pathos, AxiomaticRubric and bostonsox

Something is always "coming out" soon. Heck, you can wait forever!
Reactions: jimmy_uk and KeithBN

Nice, I was waiting for the 4th gen ones to come out refurbed. Oredered one.

Now am looking at a protective case, and damn, why do all the rugged hard cases with a kickstand all have a stupid spot for the pencil. literally makes the slimmer bezel of the iPad useless.

Not everyone uses the pencil and its just a stupid hole in the case and makes it bigger.

Yeah if only people ran their professional, free, highly trafficked blogs like you and I run ours am I right brother? We wouldn't see such unacceptable use of breaking tag then am I right
Reactions: Dj64Mk7