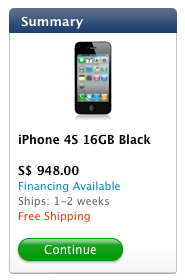 Apple does not operate online stores in all of those markets, however, and thus the new pre-orders for unlocked iPhone 4S models through Apple are only available in the following countries: Austria, Belgium, Czech Republic, Denmark, Finland, Hungary, Ireland, Italy, Luxembourg, Mexico, Netherlands, Norway, Singapore, Spain, Sweden and Switzerland. Customers in other countries and those looking to purchase subsidized units on contract may be able to arrange for pre-orders through their local iPhone carrier partners.

Rather than promising October 28th delivery for iPhone 4S pre-orders in the new batch of countries, Apple is currently citing shipping estimates of 1-2 weeks. It is unknown if Apple is planning to meet the original October 28th date or if availability will slip slightly in the face of strong demand in markets where the device has already launched. Apple announced opening weekend sales of four million units for the iPhone 4S, more than double that of the iPhone 4 last year.

Article Link: Apple Opens Up Pre-Orders for Next Round of iPhone 4S Launches

and it has more % penetration for iDevices per population
V

Really awesome that our small country of Finland gets the i phone 4S this quickly. Usually the wait is several months. Apple is really firing on all cylinders.

Just bought my first iPhone, a 16gb black one for a about 880 dollars in the Norwegian Apple Store, expected between 7. and 14. november. I sure hope it's worth it!

seems like you can do it in Germany as well for

not a bad deal, but no 4G/LTE is a deal breaker at that price.
V

Just pre-ordered a white 32GB 4S! Thanks for letting us know MacRumors, been waiting for this

What about hong kong? We want iphone #4 s

How about South Korea? I am getting tired of looking at all the Samsung phones, and the Goolge Nexus!

I think this is a really good way of managing the rollout of new hardware. Customer expectations are kept reasonable and purchasers can get special attention or purchase information if they require it.
I bet Apple will reach supply/demand balance for the 4S pretty quickly, though. They've had a lot of practice at building and shipping this form factor already and the A5 fabs have been churning out the chip for the iPad 2 for quite some time.

I'm just glad it wasn't as big a fuss as pre-orders in the first 7 countries with people having to try Apple or their service providers website to try and connect through. Great start to my weekend I must say
Z

Seems like the international rollout is speeding ahead this time. We should see some fairly impressive numbers in this quarter.

People often forget that while Apple is an amazingly innovative company it's also, thanks to Tim Cook, a ferociously efficient one. They manage supply chains and distribution with exceptional prowess. Hence the amazing profits they're able to achieve.

For all those about to get their first iPhone, how I envy you! As amazing as each subsequent iPhone has been I will never have the same feeling I had when I bought my 3GS. If it's your first smartphone then even better! I love smartphones. They are, without doubt, the most exciting area of technology right now.

That's what is great about prepaid SIM cards and unlocked phones. Just drop it in an go. Recharge online or by SMS.

Did they give you those dates in the confirmation email? Still waiting for mine


acidfast7 said:
That's what is great about prepaid SIM cards and unlocked phones. Just drop it in an go. Recharge online or by SMS.

Apparently South Korea is lower on the list than Latvia, Liechtenstein and Slovakia.

I wonder when they will ever get the iPhone 4S

Yup, I ordered mine. I'm located in Denmark.

Looking forward to getting it! It seems like this years iPhone launch has been very smooth in regard to hardware failures and glitches in general. Especially when you consider the antenna-gate hoopla of last year.

syan48306 said:
I wonder when South Korea will ever get the iPhone 4S

Apple said they will try to make it available in most countries by the end of the year. I think.
G

Still nothing for New Zealand

Glass! said:
Still nothing for New Zealand
Click to expand...

why did apple leave you guys out?
K