A YouTube video posted yesterday reveals that Apple has released new bumper models that are compatible with both the existing iPhone 4 and the CDMA iPhone 4 set for release on Verizon next month. With the primary difference in physical features between the two models being the location of the mute switch, Apple has widened the cutout in the bumper to accommodate either switch position.

Apple has also updated its online store with new "B" model numbers for the bumpers, replacing the original "A" models. The company has, however, yet to update its product images to reflect the modified mute switch opening.

Meanwhile, BGR reports that Apple has issued a blackout on vacations for its U.S. retail store employees between February 5th and 18th in order to handle the expected rush generated by the Verizon iPhone when it launches on February 10th. The company is also reportedly planning for extended hours at its store to handle the crush.

Claims of Apple limiting retail employee vacations had been one of key pieces of evidence narrowing down the expected launch date for the device.

I'm glad the bumpers will be backwards compatible!

I'm hoping Apple comes out with a better selection of colours as well. I really like the Apple bumper compared to other similar ones, but would like a bit more excitement in the colours!

The "free" bumper won't work as well for Verizon owners, I guess. Decent solution to the problem all the same.

I'm trying to work out what is funnier:

[1] The fact that this "issue" was solved with the smallest bit of lateral thinking i.e. — let's make the hole bigger.
[2] The fact that as far as I could see no one in the tech media or in comments suggested this as a solution.

As an aside, do you think there is an opening in the market for a D.I.Y. AT&T to Verizon iPhone bumper convertor kit. i.e. a sharp knife?
I

Why bother making a new bumper if the dock connector opening is still the same tiny cut-out? That's the weakest point of the Apple bumper!

Wow today must be a slow day with regards to Apple news.

Meh, they're bumpers.
A

I don't know why anyone would spend $29 +tax on that. It's sooo overpriced.

oh man. i'm so happy they made it universal thanks apple i love you so much

spencers said:
I'm glad the bumpers will be backwards compatible!
Click to expand...

The bumpers are phony, a ruse to prevent Apple from having to explain why the Verizon phone works so much better than the GSM model.

IMO, they def moved the button to not allow the new phone to get the "hand me down" bumpers. Now they made a new one, ppl will have to purchase the new style if they want one for the ViPhone. Very smart for them to recoup some money on it. (From a business perspective)
D

A Mac Gamer said:
I don't know why anyone would spend $29 +tax on that. It's sooo overpriced.
Click to expand...

I'm waiting for the first troll to say they are in anticipation of the free give away for the next *********** issue. (Refuse to use the phrase).

Aatos.1 said:
The bumpers are phony, a ruse to prevent Apple from having to explain why the Verizon phone works so much better than the GSM model.
Click to expand...

This post is phony. How do you know how well Verizon will work? Surely you have tested it side by side with the GSM model?

Btw, Verizon can't even keep a static FAQ page up on the day of the verizon iphone announcement.

iPhobic said:
Why bother making a new bumper if the dock connector opening is still the same tiny cut-out? That's the weakest point of the Apple bumper!
Click to expand...

Looks like the dock connector cutout is significantly bigger. 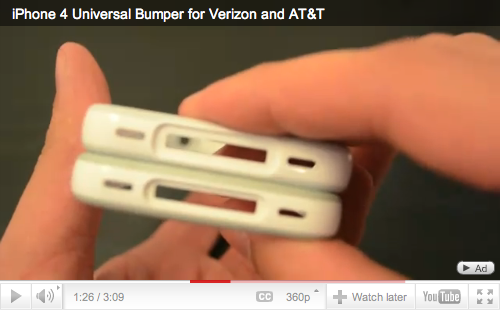 How about making a bumper that uses a soft inside so that it doesn't scratch the iPhone 4! I would stay away from the Apple bumpers guys...they'll ruin the metal on the outside of your phone.

This sucks! I want the bigger dock connector but I don't like the additional space next to the vib switch...

i cant imagine how a bumper can scratch the phone so bad like that , i dropped my phone and the metal did not get hurt as bad as that pic
I

Guess that it's still possible to do a death grip on the phone...
P

IPPlanMan said:
Guess that it's still possible to do a death grip on the phone...
Click to expand...

A death grip is a problem on all mobile phones.

On can, however, "deathgrip" the AT&T iPhone with one finger tip in the right place. I hope the Verizon iPhone is different.

Guess it's time for me to see if I can get one of the original bumpers while I still can.

Even if the volume buttons of the 2 phones are slightly off, the buttons on the bumpers should still be functional. I guess it's easier to make one version of the bumper rather than two.

MacRumors said:
The company is also reportedly planning for extended hours at its store to handle the crush.
Click to expand...

Meh, they do this every time Verizon launches an new Andro.... wait, no they don't.
B

they wouldn't fit the existing iPhone 4 though, didn't they move the volume buttons too.