Last week, a music player app called "Rewound" surfaced on the App Store, with the purpose of bringing back classic music players through downloadable skins, including the iPod with its classic click wheel design.

Lots of people loved the iPod design for the nostalgia, but Apple wasn't a fan and has pulled the app from the App Store. 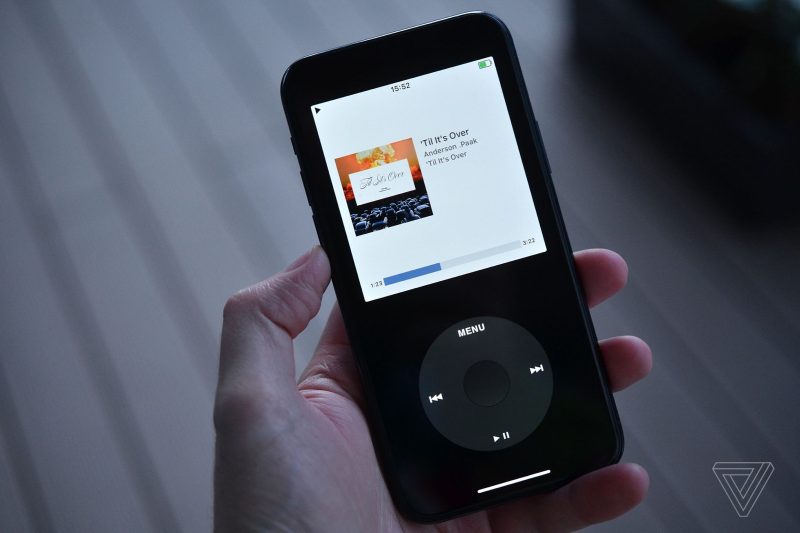 Image via The Verge​
In an article on Medium, Rewound's creators explain that Apple "killed" the app because it copied the iPod's design, charged a fee for Apple Music features, and, apparently, could be mistaken for an Apple-designed app.

Rewound disputes all of these charges, insisting that Apple was "salty" that users shared clickwheel skins (the app could be customized with multiple looks, though initial focus was on the iPod). From the Medium post:

- An optional scrolling motion to navigate a menu isn't Apple IP
- A button layout without a wheel or scrolling navigation isn't Apple IP
- Similar menu systems are found in all operating systems.
- Skins were user added/downloaded, we didn't include them in the app.
Click to expand...

Rewound's developer says that the app can't be updated to get it re-approved without breaking the app for the 170,000 people who use it at the current time. A separate version is in the works, but the developer feels that it is "barely worth the time or effort to even try and humor them" as the developer believes Apple will continue to deny the app.

The developer plans to make a Rewound web app as an alternative that can be used on the iPhone "without Apple's approval," and is seeking $50,000 in funding for the project.

Is anyone really surprised? The developer or us?
Brand protection because the brand is what took it over the trillion $ value.
Reactions: JDGwf, PastaPrimav, w7ay and 14 others

Darn, I would have loved to have this app.
Too late I guess.
Reactions: andrewr2123, Turnpike, MrkJensen and 15 others

Really really surprised this made it through review
Reactions: drumcat, aylk, recoil80 and 12 others

Glad I grabbed it already! I saw this coming a mile away. Fun little app.
Reactions: willmtaylor, fonzy91, SackJabbit and 6 others

I downloaded this app and it seemed terrible tbh. The whole user-added argument is a clear circumvention, but I still don't see why Apple took it down.
Reactions: sd70mac

Had I known this app existed, I definitely would have downloaded.
Oh well...
Reactions: SackJabbit, airbatross, sd70mac and 5 others

This will be a staple feature in iOS 14.
Reactions: MrkJensen, cwwilson, GrumpyMom and 30 others
E

While the app/concept is certainly cool, the dev's response is pretty lame. There's zero question the app was copying the iPod hardware/software.
Reactions: SackJabbit, IGI2, DEXTERITY and 19 others

I grabbed it too. (Well my son did but I managed to grab it from his download from family purchases just now) yeah the novelty factor will no doubt wear off at some stage but love the nostalgia of using it
Reactions: sd70mac, heffsf, AlexGraphicD and 2 others

...insisting that Apple was "salty"

I can't even respond the this. Too damn funny.
Reactions: willmtaylor, GrumpyMom, vidjahgamz and 5 others
S

if you ask me the only "salty" ones here are the developers
Reactions: philosoraptor1, StumpJumper, SackJabbit and 12 others
M

eatrains said:
While the app/concept is certainly cool, the dev's response is pretty lame. There's zero question the app was copying the iPod hardware/software.
Click to expand...

Reminds me of the old Samsung, “you can’t patent rounded rectangles” arguments.
Reactions: spotlight07, AlexGraphicD, tongxinshe and 2 others

Seems like a pretty silly little app. Only news because Apple took it down, I guess?
Reactions: DEXTERITY, sd70mac and MrUNIMOG
J

I don't entirely agree, but there is an argument that famous brands are obligated to defend their IP, because if it ever appears that they have abandoned it, it will be easier for others to (intentionally) copycat it

So sometimes what seems like a really jerky move is obligatory.

If this is the case, here, blame the lawyers, not Apple ..
Reactions: Turnpike, Peadogie, drumcat and 9 others
D

MacRumors said:
The developer plans to make a Rewound web app [...] and is seeking $50,000 in funding for the project.
Click to expand...

Cool app. But $50K, seriously? I think he's using the attention to get some quick cash from sympathizers.
Reactions: Turnpike, willmtaylor, Lionel Messi and 21 others
C

I side with Apple on this one. While the individual aspects on their own may not be unique, the magic of the iPod was the "whole widget"... how everything together made it was it was, and that's what Apple needs to protect.
Reactions: GrumpyMom, DEXTERITY, AlexGraphicD and 2 others

Dave-Z said:
Cool app. But $50K, seriously? I think he's using the attention to get some quick cash from sympathizers.
Click to expand...

Yeah, if they already have the code and graphics created, I'm not sure why they need to raise another $50,000 to build a web app.
Reactions: omglolbbq, philosoraptor1, DEXTERITY and 3 others
C

mrgraff said:
Yeah, if they already have the code and graphics created, I'm not sure why they need to raise another $50,000 to build a web app.
Click to expand...

To be fair, the code for a native app is entirely different from code for a web app. Different languages. But a lot of the model and design could be transferrable between the two implementations, for sure.
Reactions: Turnpike, ArtOfWarfare, SackJabbit and 9 others

Well, unfortunately this is what happens when there's a 100% monopoly on the App Store.
Reactions: Lionel Messi, omglolbbq, Codpeace and 9 others

An app I personally would never wanna use. I loved the classic iPods, but have zero need for an app like this Lol.
Reactions: w7ay, DEXTERITY, dan110 and 1 other person

I downloaded it, then went through the process of finding the "skins" All in all, it was a janky setup. Deleted it after 15 minutes
Reactions: yegon, DEXTERITY, peterharte and 1 other person
A

Let me just take my first gen Nano from the shelf... click-wheel and iPod experience is something I really miss nowadays.
Reactions: dan110

It's hard to take their protests about it not infringing Apple IP seriously when all of the positive reviews they call out specifically say it turns your iPhone into an iPod. Not a "2000s-era MP3 player," an iPod.

They're right that Apple's review process is stupid, but only in-so-far as it should have caught this before it went live.
Reactions: GrumpyMom, DEXTERITY, Keness and 1 other person
V