Though iCloud Photo Library was available during the iOS 8 beta testing period, Apple appears to have demoted it to beta status and removed it from the iOS 8 golden master, the software that will be distributed to the public next week. 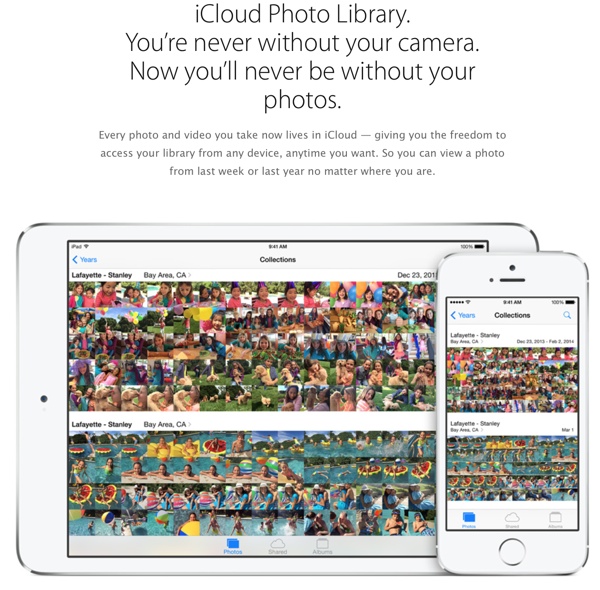 It is unclear why Apple has demoted iCloud Photo Library back to beta status and removed it from the golden master, but it is possible that the company has decided to push it back in light of the negative press iCloud has received in recent weeks due to the celebrity photo leak.

Touted as one of the major features of iOS 8/OS X Yosemite, SMS Continuity lets Macs and iOS like iPads receive SMS text messages and phone calls through the iPhone.

Though it will be missing a few features, Apple has plans to release iOS 8 to the public on Wednesday, September 17, two days ahead of the September 19 release date of the iPhone 6 and iPhone 6 Plus.

They're waiting for Yosemite.
B

Bummer. But it's aiiight, not getting my new iPhone until October anyway, and Yosemite launches that month as well.
M

musika said:
They're waiting for Yosemite.
Click to expand...

Or, for iCloud Photos, when the new Photos app launches next year.

Macrumors.com said:
It is unclear why Apple has demoted iCloud Photo Library
Click to expand...

You must be joking.
R

Its not removed from the GM. It is dynamically added. My iCloud Photo option has vanished and pop'ed back into the settings. Think the option removes itself when they work on the cloud (aka they can remote remove it).

You can't have the cart before the horse, and in this case you can't have SMS relay before Yosemite, obviously.

I'm able to send an SMS from my iPad without any issues.
I'm also able to make calls and receive calls.
But I do notice both features have been working erratically.
I'll keep testing.

My guess as well. Along with Continuity - it's literally useless without Yosemite; so delaying it to October is a reasonably clear sign that Yosemite is coming in October.

My guess is that post-GM developer betas of iOS 8 will become available to continue to test Continuity with beta Yosemite.

So what was thought to be the GM build won't be then. The latest Dev Build under Photos in Settings it allows you to turn this on and off, and mentions Beta in parenthesis. This article mentions it is removed altogether.
P

So disappointing. Really loved the idea and execution of it during the betas. Was surprised with the GM to see the Beta tag thrown on it.

I guess if they can launch it all at once with a Photos app on Mac it won't be so bad.

They need to increase security to prevent another Fappening.

They are obviously waiting for Yosemite.

I thought exactly the same. iCloud Photo Library was the #1 problem for me during the beta period. And it's still eating over 1 GB of my storage even though I deleted it.

I couldn't have imagined it being out yet.

evansls said:
They need to increase security to prevent another Fappening.
Click to expand...

Every time I read the word Fappening I can't help but laugh. So ridiculous. Lol.
Last edited: Sep 12, 2014
J

haha I laughed as well. Cause no one knows what the fappening is right...
S

I hope they put icloud photo library on icloud.com when it comes. Would be a perfect photo solution if you can access from a web browser.
T

It also works with the iPad. I've been using it to SMS friends without iPhones and its been working really well.

Ries said:
Its not removed from the GM. It is dynamically added. My iCloud Photo option has vanished and pop'ed back into the settings. Think the option removes itself when they work on the cloud.
Click to expand...

I thought I saw it last night, but it then disappeared.
Also, There's no Camera Roll anymore. It's now a confusing conglomerate we need to figure out; it's most likely a simple concept, but since Apple still is adding and removing features, it's hard to figure out how it all works.
B

musika said:
They're waiting for Yosemite.
Click to expand...

CrazyForApple said:
They are obviously waiting for Yosemite.
Click to expand...

For what? iCloud Photo Library won't work on yosemite until Photos is out next year.

SMS continuity has worked between iPad +iPhone during the beta period.


I have iCloud Photo Library on my iOS 8 Gm iPhone anyway.

tkatz said:
It also works with the iPad. I've been using it to SMS friends without iPhones and its been working really well.
Click to expand...

I just tested sending from the iPad, and the message appeared on my iPhone, but on the iPad continued saying: Sending and after a while it said "Not delivered"; however, the message was received at the other end, but the reply never reach the iPad, only the iPhone.
C

Well, this is mildly disappointing. I was looking forward to using iCloud Photo Library to leverage upgrading myself to the iPhone Plus 16GB instead of the 64GB iPhone 6 (I know, wtf why?! I had a long discussion about this with my good homie yesterday and we both arrived at this conclusion since we stream everything with an unlimited plan). Hopefully it'll be ready when I'm ready to get my iPhone Plus.
Z

Lucky736 said:
Every time I read the world Fappening I can't help but laugh. So ridiculous. Lol.
Click to expand...