Apple has raised its prices for the MacBook, MacBook Air, MacBook Pro, Mac mini and Mac Pro this week in Australia, Brazil, New Zealand, Norway, Malaysia, Mexico, Thailand and Turkey as the values of foreign currencies continue to fluctuate against the U.S. dollar. 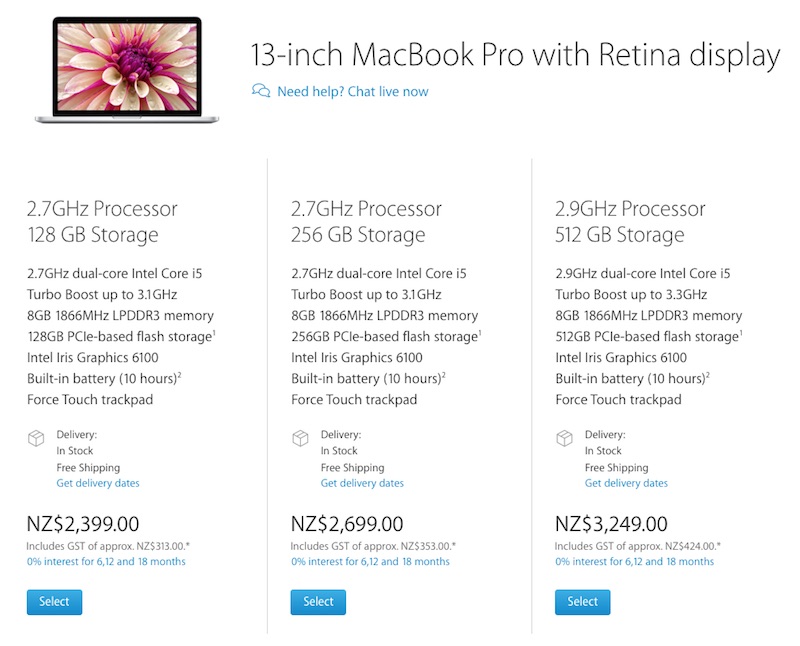 Retina MacBook Pro prices now start at kr 14 990,00 in Norway, as another example, an increase over the former kr 12 590,00 price for the entry-level configuration. In Malaysia, the Retina MacBook Pro is also now more expensive, at RM 5,899.00 and up.

Apple reports its quarterly earnings in U.S. dollars, and routinely adjusts its prices in foreign countries due to currency exchange rates that are beyond its control. Australia, Canada and Europe have faced similar price increases this year.

Update: MacRumors has confirmed several tips from readers about similar price increases on Macs and some other products in Australia, Mexico, Thailand and Turkey.

I notice this too today. 3rd party retailers haven't updated their prices though, still the old prices. I'm in NZ btw. Crazy how the MacBook 12'' and rMBP 13" price has gone up by $400!
Reactions: Aloft085 and TechGod

As someone who lives in New Zealand and loves Apple products it's quite frustrating to see news like this when we don't even get an Apple store and our iTunes selection isn't as good as other countries, I guess now that I've got Netflix I'm not as bothered about not having TV shows on iTunes but you can't get everything on New Zealand Netflix. Bizarrely one such show is House of Cards.
Reactions: scotttnz and Sandstorm

I'm UK ex-pat living in NZ for the last 2 years.
NZ prices have been a good 10-15% cheaper than UK prices since I arrived here.
Until this week and now they are almost identical at todays exchange rates.
I now find myself praying for a recovery in international milk solid prices and a return to the highs of the NZ$ especially with the lovely new Apple gear announced yesterday.

Such a strong US $ might deter new buyers from jumping into Apple's ecosystem.
Result = Potential loss of sales?
Last edited: Oct 14, 2015
Reactions: mektobat, Benjamin Frost, PBRsg and 2 others

Erm, do we need these articles?

For about a year or so, one thing that pisses me off so much is that because of how weak the Canadian dollar is, everything has to be increased in price. Instead of $1299, things cost $1549. It's useful if you get paid in USD, then it's economical, but otherwise you're just losing money because of stupid economical problems.
Reactions: xSeaside and coolfactor
I

Lucky I got my 13 inch retina 256GB for only $1,910 last month from a third party retailer seeing as they're $2,699 in New Zealand now.
Reactions: Shirasaki, Sandstorm and appledefenceforce
C

Apple: Let's make it even harder for people to afford our stuff!
Reactions: Pahanda, midwich, brentonbrenton and 21 others
C

Now this is a risk for apple. If the USD strengtehns against its major trading partners, then apple products become more expensive. This all but removes apple from my budget as my salary doesnt change with the exahnge rate.
Reactions: ddkkpp, Glassed Silver, Jamalien and 10 others

cdm283813 said:
Apple: Let's make it even harder for people to afford our stuff!
Click to expand...

It's not their fault, if they don't increase the prices, then their products may become unprofitable.
Reactions: kds1

Meh, I'll stick to Trade Me.
Reactions: Klyster and zakndax

Kabeyun said:
Erm, do we need these articles?
Click to expand...

Wow. Not a surprise I guess. I bet you're one of those people that think the US is the only country in the whole world!

Oh this is stupid...I was gonna recommend a MBA to a friend of mine but now the prices are totally ridiculous!
Last edited by a moderator: Oct 14, 2015
Reactions: AirLinc, moxin, brentonbrenton and 36 others

Whoa, those are some serious price increases, especially in New Zealand and Brazil.
You gotta feel bad for our friends down there.....
Reactions: Sandstorm

garirry said:
It's not their fault, if they don't increase the prices, then their products may become unprofitable.
Click to expand...

No...it means they'll make slightly less per product but it wouldn't make the products unprofitable. I'm certain they could have taken a slight hit to maintain consumer loyalty.


macs4nw said:
Whoa, those are some serious increases for New Zealand, you gotta feel bad for our friends there.....
Click to expand...

You have no idea...its extremely painful.
Last edited by a moderator: Oct 14, 2015
Reactions: Jamalien, Benjamin Frost, Sandstorm and 2 others

And in Australia.... Can't wait till our government hopefully forces Apple to fully pay its company tax. Then they'll have the right to charge at these levels.

The Brazilian Real has devaluated over 50% YTD so it does surprise me that Apple took so long to change the prices there. They still did not adjust the prices for iPhone or iPad. The price change today was just an adjustment to equal in dollars what the price was at the beginning of the year.
Last edited by a moderator: Oct 14, 2015
Reactions: pittpanthersfan

cdm283813 said:
Apple: Let's make it even harder for people to afford our stuff!
Click to expand...

Economics can be difficult
Reactions: kds1

garirry said:
It's not their fault, if they don't increase the prices, then their products may become unprofitable.
Click to expand...

No, and I’m not being facetious here but we never see a headline like, ‘Apple lowers Mac prices in…………'.
There’ll be one of two reasons for this on an internet forum;

Well then no Apple products for me this year. They're already expensive enough.

PS I like how they're so quick to increase prices due to currency fluctuations but take ages to reduce price when the US dollar is weaker. Thanks.
Reactions: dnsp, insomniac86, xSeaside and 14 others

H2SO4 said:
No, and I’m not being facetious here but we never see a headline like, ‘Apple lowers Mac prices in…………'.
There’ll be one of two reasons for this on an internet forum;

I'm not certain, but think that older Macs were much more expensive before in Canada than how they are now. An iMac G4 costed $2999 in Canada while it costed $2199 in US. With the G5 it got cheaper, with the intel macs it was only a hundred dollars of difference, and eventually ended up being the same price. It probably has clickbait in mind.

H2SO4 said:
No, and I’m not being facetious here but we never see a headline like, ‘Apple lowers Mac prices in…………'.
There’ll be one of two reasons for this on an internet forum;

Kabeyun said:
Erm, do we need these articles?
Click to expand...

It's apple related, why not? It's like saying...do you need to come to this thread and comment?