Right on schedule, Apple has released iOS 4.1 for the iPhone and iPod touch. The update, known as Build 8B117 and available for the iPhone 3G, iPhone 3GS, iPhone 4, and second- and third-generation iPod touch models, brings several new features and fixes. 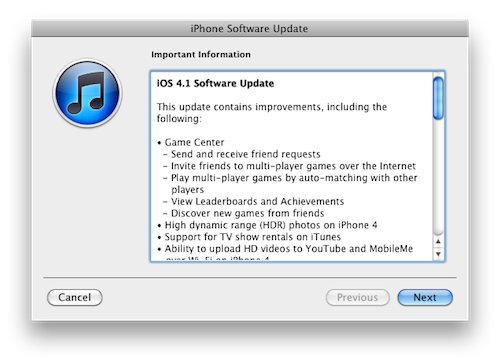 The update has also been touted as addressing several high-profile bugs, including proximity sensor issues, performance issues on the iPhone 3G, and Bluetooth problems.

Apple's new fourth-generation iPod touch is shipping with iOS 4.1 already installed. That device has started appearing in stores and on customers' doorsteps today.

It's still telling me 4.0.2 is the current firmware for iphone4..
Comment
M

Been waiting quite awhile for my iPhone 3G to run faster!
Comment

'Tis downloading now. Should I do a full DFU mode restore before installing and upgrading?

I think they already have it jailbroken with Redsn0w for iPhone 3G.
Comment
F

benthewraith said:
'Tis downloading now. Should I do a full DFU mode restore before installing and upgrading?
Click to expand...

HDR is only for the iPhone 4?? It's not enabled on the 3GS, that was the big thing I was looking forward to in this update..
Comment
I

ipod touch 2 g way to go, screw the jailbreak, i want to get the best nick available!
Comment
A

Hope this fixes the "crash when on call longer than 5 minutes" bug :/ That one is really unacceptable :/
Comment

JLemm said:
It's still telling me 4.0.2 is the current firmware for iphone4..
Click to expand...

Updating now. Very impressed with the folks who predicted release at 10 am Cupertino time.
Comment
M

I've connected my iTouch a few times and keep being offered 4.0.2. Does anyone know if I'll need to download and install 4.0.2 in order to be offered 4.1 or will I be able to jump straight to 4.1 when it is available (guessing it might be a different time here as I'm in England)? I assume I can just jump up but want to check
Comment
T

cowcaster88 said:
HDR is only for the iPhone 4?? It's not enabled on the 3GS, that was the big thing I was looking forward to in this update..
Click to expand...

oh wow really?? that does suck... i expected it for both. but i have an ip4 so i'm
Comment
A

cowcaster88 said:
HDR is only for the iPhone 4?? It's not enabled on the 3GS, that was the big thing I was looking forward to in this update..
Click to expand...

Out with the old, in with the new.
Comment

For those wondering, this is bit-for-bit IDENTICAL to the GM that was released last week. There is no need to download this if you installed the GM.
Comment