As had been rumored yesterday after a false start, Apple has just released iOS 4.3 to the public, two days ahead of schedule. Updates are available for the iPad, iPhone, and iPod touch, and users should be able update their devices by connecting them to iTunes and clicking the "Check for Update" button.

iOS 4.3 brings a number of enhancements including AirPlay video compatibility for third-party apps and websites, Safari speed improvements, Home Sharing to stream media from any iTunes library to an iOS device via Wi-Fi, and a new option for customizing the iPad's side switch to serve as a mute toggle or screen orientation lock. Finally, iOS 4.3 brings personal hotspot functionality to the GSM iPhone 4 following the feature's debut on the Verizon iPhone last month.This update contains new features and improvements, including the following:

* Personal Hotspot
- Share iPhone 4 cellular data with up to 5 devices (combination of up to 3 Wi-Fi, 3 Bluetooth, and 1 USB)

* Bug fixesUpdate: The iOS 4.3 update is the same 8F190 build that was seeded to developers last week as the golden master build. A separate 8F191 build has also been posted for the three new iPad models (Wi-Fi and two 3G models) being released on Friday.

Apple has also released an Apple TV software update known as iOS 4.3 Build 8F191m, although it it reportedly registering as software version 4.2 on Apple TVs themselves, similar to earlier versions where software version numbers have been one behind the corresponding iOS versions.

Darren R is a god.

Wow, and chance to loose my JB
Not.

Been looking forward to the Hotspot. Now, hopefully my carrier (Rogers), hasn't messed with it.
D

Still shows 4.2.1 is the latest version for me

That's odd. What happened to March 11?

Gah! I gotta use logmein and get it downloaded to my pc at home!
D

So home sharing works with our iDevices now....but I mostly use home sharing to share video files between macs. So can I wirelessly send video and music to my iDevice?

Lol, i literally looked 5 mins ago and then it said 4.2.1 was latest version
W

In the Land of the Evil Empire(TM)

Bah, iTunes gave me the 4.3 Download & Install option, then no downloading. Now, it's reverting to iOS 4.2.1 is the latest version. Will try again shortly

Any 4.3 update to apple TV active yet?

Hmm... I think I need to have my iPhone plugged in, in order to download it huh... minor technical difficulties... *sigh*
R

I suppose they wanted to ease the strain on their servers for the iPad 2 release.


Is it just me, or does this iOS release seem like it deserves a 4.2.2 designation?
S

djkirsten said:
So home sharing works with our iDevices now....but I mostly use home sharing to share video files between macs. So can I wirelessly send video and music to my iDevice?
Click to expand...

Yep, and it works very nicely too. Even works stearming to iDevice then AirPlaying to AppleTV, albeit we need the

TV update to enable video rather than just audio. Talking of which, where IS the

downloading it and updating the iphone now

Here's proof that it's live 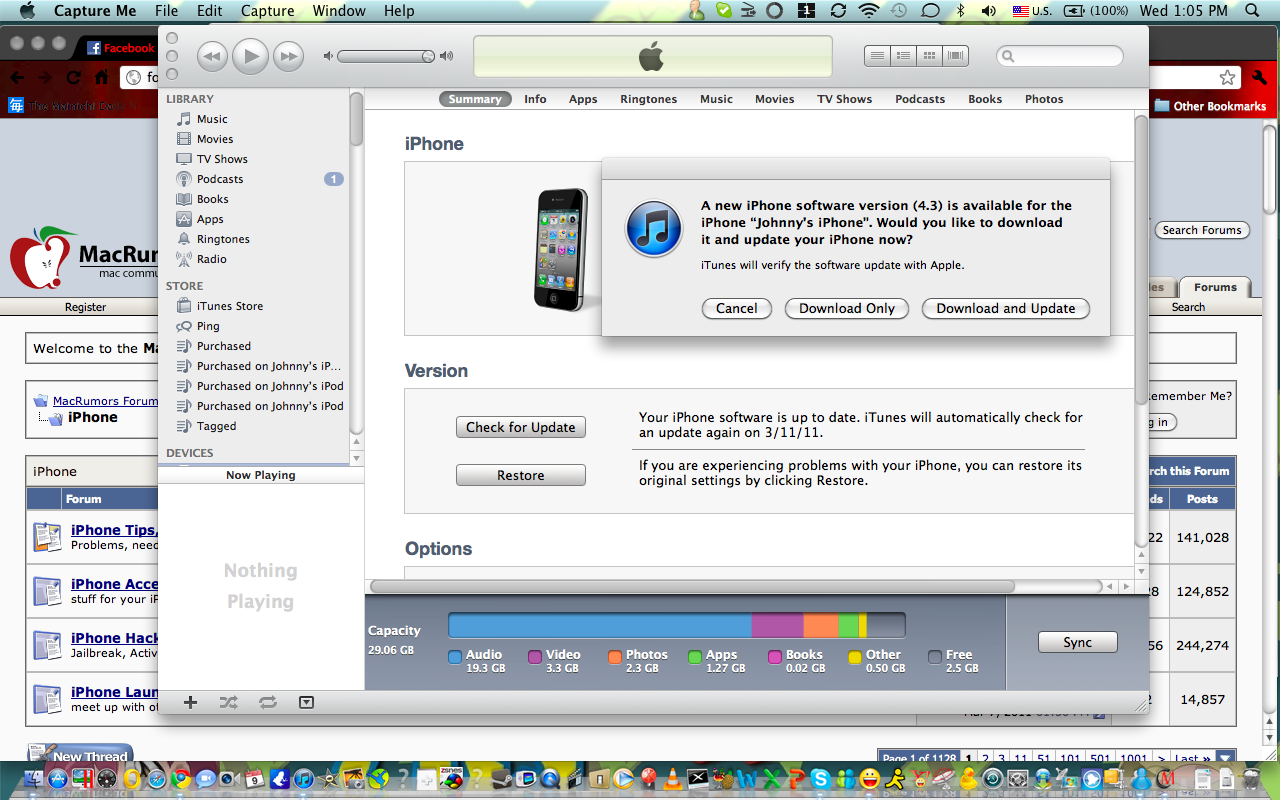 Anyone know if it's the same build number as the GM?

Sweet! Now I can get ready for my iPad 2 purchase...
S