Woohoo! Should be interesting to see what this one has, if anything new.
Comment

What am I missing? Hasn't OS 4.0 been out to devs for a while?
Comment
G

Yep. This is 4.0 Beta 4. Been a beta release every two weeks now.
Comment

AH! Ok, I thought this was just another pointless thread ... OS 4.0 Beta 4 is new.
Comment

This is the 4th beta of os4. Now the million dollar question? Can you install this from Windows?
Comment 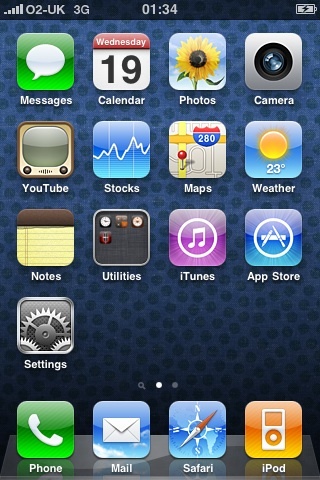 New iPhone OS 4 wallpaper option (Source: forum post by nistromo)
Apple is keeping its developers busy today: Alongside a new build of Mac OS X 10.6.4, Apple has also released the fourth beta version of iPhone OS 4 and the associated software development kit (SDK). The release is not much of a surprise given that Apple has taken to biweekly releases of its iPhone development tools and today marks two weeks since the release of the third beta version.

Available to registered developers via the iPhone Dev Center, the third beta is a refinement of the operating system and developer tools initially released in early April alongside a media event to introduce the next-generation software for Apple's iPhone OS devices. No details on changes in the new version have yet been documented beyond new wallpaper options, but those with access to the beta are undoubtedly already digging for information.

Apple is expected to publicly release iPhone OS 4 to iPhone and iPod touch users "this summer", although early models of those devices will not be compatible with the new OS and even some newer models will not be able to take advantage of all of the features. iPhone OS 4 will come to the iPad "in the fall".

I must say I love the thumbnails in the folders. That's a really nice touch.
Comment

So i take it that iPhone 4 lets you customize the background? (I have not been keeping up to date on iPhone releases)
Comment

Well we know iPods refresh in the fall. And we're told the iPad will get OS 4 then also. Now, any ideas on possible hardware changes/upgrades for the iPod touch and the iPad? The latter will be at the six month point in September. Might Apple surprise us? "Oh, and one more thing...."
Comment
J

DeeGee48 said:
Well we know iPods refresh in the fall. And we're told the iPad will get OS 4 then also. Now, any ideas on possible hardware changes/upgrades for the iPod touch and the iPad? The latter will be at the six month point in September. Might Apple surprise us? "Oh, and one more thing...."
Click to expand...