Apple today released iTunes 12.3, making the software compatible with the newly released iOS 9 update and the upcoming OS X El Capitan update, set to be released to the public on September 30.

iTunes 12.3 can be downloaded immediately via the Software Update mechanism in the Mac App Store.

This update to iTunes adds support for iOS 9 and is designed for OS X El Capitan. It also:

This update also includes improvements to overall stability and performance.
Click to expand...

I didn't expect to see this.

Should we have updated with this version!?!

Any chance they uped the iTunes Match track limit with this?

And the 100k song limit increase for Apple Music Eddy Cue talked about is part of all this, right?

Michaelgtrusa said:
I didn't expect to see this.
Click to expand...

I think we needed it for the folder size change on iPads. More icons in the view now.

??? Wasn't iTunes already compatible with iOS9 and El Capitan? For me it seemed to work as well as ever with the betas.

Well finally. At least one of the updates is actually downloading.

I wonder whether the 100k limit has been finally introduced? Release notes don't mention it.

Mine still says that 12.2.2 was the latest (and I'm already running that on El Capitan)

This should be out yesterday. For people who like to update from itunes.
Reactions: Keane16, Glassed Silver, sunny2k1 and 1 other person

"Click Continue to quit “iTunes” and begin the update. The application will open when the update is complete."

morcutt11 said:
Mine still says that 12.2.2 was the latest (and I'm already running that on El Capitan)
Click to expand...

OMG - what a 'duh' moment. Sorry about that - I just recently switched to Mac from Windows and I still end up with these 'duh' moments every now and then...
Reactions: richhh
L

Am I the only one who can't arrange Apps with IOS 9 from iTunes? Was hoping 12.3 and a fresh install of iOS 9 would fix it. It didn't even with a new empty iTunes Library, I get the spinner all day when I go to Apps

Well, I see one new feature: 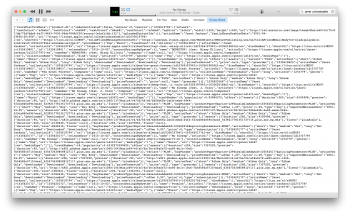 Wow, I guess people will have to learn how to code to use the iTunes Store now.

I guess I have a leg up here!

I didn't realize iTunes had an issue with El Capitan/iOS9 betas.

Am glad they claim to have fixed the bug about favorite songs not tagging across devices properly.

Apple today released iTunes 12.3, making the software compatible with the newly released iOS 9 update and the upcoming OS X El Capitan update, set to be released to the public on September 30.

iTunes 12.3 can be downloaded immediately via the Software Update mechanism in the Mac App Store.

Submitted appropriate feedback to Apple on the first day of previous release.
S

iTunes needs a redo. It should be focused only on music. Create separate apps for movies, apps, and books.
Reactions: AAPLGeek, Analog Kid and xSeaside