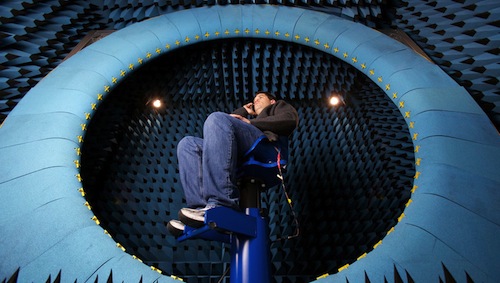 Apple has revamped the antenna performance page on its website, removing references to and videos of the performance of competitors' smartphones in comparison to the iPhone 4. Apple launched the page after its iPhone 4 press conference to demonstrate how a number of other handsets, including ones from Research in Motion, HTC, and Samsung, as well as the iPhone 3GS, see signal attenuation when gripped tightly in the hand.

Apple's continued interest in drawing its competitors into the antenna performance discussion was furthered by several updates to the site to add the Nokia N97 mini and the Motorola Droid X. Just a week after the most recent update, however, all of the comparisons have been removed, leaving only general claims that the attenuation issue affects most models of smartphones.

The opposite of amplification, attenuation happens whenever a signal is obstructed. All antennas - including television, radio, GPS and mobile antennas - can experience attenuation. And with most antennas, the density and composition of the human hand can cause attenuation to a greater degree than some other materials. On a mobile phone, signal loss typically occurs when your hand attenuates the most sensitive part of the antenna. Which, on iPhone 4, is the black strip of the lower left corner of the antenna band.
Click to expand...

The reason for the removal is unknown, with speculation running from Apple receiving complaints from other handset makers to the company simply wishing to reduce the amount of attention drawn to the issue now that its free case program is underway and Apple bumpers are making their way into the hands of consumers. Interestingly, the videos remain available on the company's YouTube site and on many, but not all, international versions of its antenna performance page.

They were probably about to sued to bankruptcy by other manufacturers.
Comment
C

G4DP said:
They were probably about to sued to bankruptcy by other manufacturers.
Click to expand...

As long as the videos were not doctored, I don't see why that would be the case.
Comment
A

Good move the page was just drawing a lot of attention to the issue.

If they aren't planning to fix it they should just do the case thing, and let the problem blow over.

I think the reception loss problem is kind of sucky but if I had the money I would be buying an iPhone 4 today...

So considering that fact they are better off just letting people quiet down rather than trying to prove their point.
Comment
S

calb said:
As long as the videos were not doctored, I don't see why that would be the case.
Click to expand...

The videos were doctored. E.g., n97 mini was in energy saving mode in which the antenna software behaves differently than under normal operation. Droid X was apparently not in 3G network in the first place.
Comment

Was there any point in keeping them any longer.

Maybe it was removed because you has to hold tephones in a unnatural way todrop signal, but holding the iPhone 4 normally, drops all bars and the call.
Comment
V

Correct decision, Apple. They made a mistake and they fixed it.

Smart move. Gotta hand it to apple -- they turned their own mistake into an industry-wide failing and now a generation of phone users are still standing around gripping their phones to see if signal will drop, regardless of the brand they own. Simply brilliant.
Comment
G

Lets, see lying about the competitions products to make yours less crap than it actually is. Steve Jobs lying in public about the other companies?

That there is enough to blow Apple back 10 years.
Comment
R

They made their point. And now it's time to move on. Considering the harsh criticism in reactions on various websites (including this one) about the video's, especially about adding the more recent video's, I think they made the right decision.

Still, I think they were right to show the video's in the first place. It still baffles me how few actual comparisons were made with competing phones. All of a sudden, the whole media industry lived on apples. The internet is huge and the only objective comparisons were made by Anandtech, AntennaSys and a few more local websites (including a Dutch and Norwegian website). But proof and facts don't matter in this day-and-age. Even Apple got that right, by just showing bars and not actual signal strength.
Comment
C

Maybe because it was infantile and embarrassing and unsophisticated and misleading and stupid and in general they just hope the whole issue goes away.
Comment

That is a good decision--no fanfare--just get rid on the comparisons and move on.
Comment

sjo said:
The videos were doctored. E.g., n97 mini was in energy saving mode in which the antenna software behaves differently than under normal operation. Droid X was apparently not in 3G network in the first place.
Click to expand...

Exactly. My money is on this as being the reason.
Comment

The heat was on from their string of half-truths. I think that Droid X video blew the top off their whole bucket of lies the 'fanboys' have been eating like it was M&M's.
Comment

This is good. I can't believe Apple put them up in the first place, it was incredibly pathetic!
Comment

bah, apple should mirror the image vertically. then you'll can catch the iphone in naturally way, by the oposite side eheeh
Comment

"And with most antennas, the density and composition of the human hand can cause attenuation to a greater degree than some other material"
Comment
A

It was a mistake from the start to talk about competition. They should concentrate on their own products. I am glad to see them correct their mistake, even if the reasons for doing that might not be the right ones.
Comment
D

There's not much to argue about the situation. Apple designed the antenna at a convenient place for the user to cause interference. The problem is bad and they need to hurry and find a fix. Not a patch with excuses.
Comment
D

MarximusMG said:
Exactly. My money is on this as being the reason.
Click to expand...

absolutely. Apple knew about their flaw from the beginning (why they released bumpers to start with). Apple attempted to fake videos of other phones signal dropping in an effort to make their phone seem normal. I love Apple computers, but when it comes to the iPhone, Apple is just so lame.
Comment
C

what is the difference between what Apple did with those spots and what is done by those pc bench mark gurus? Nothing! Hell, look at the car crash test. Damn! If that ain't putting your s*** out there, and we are talking about a vehicle and not a cell phone, than I don't know what is.
Viva Apple. I love my iphone 4 and there is no celly maker out there that can touch it.
Next on my tech to acquire agenda:ipad 64 gig with wifi+3G. Then the 21.5 inch imac. Hot damn!!!!!!
Comment
You must log in or register to reply here.
Share:
Facebook Twitter Reddit Email Share Link
Register on MacRumors! This sidebar will go away, and you'll see fewer ads.
Sign Up
Top Bottom