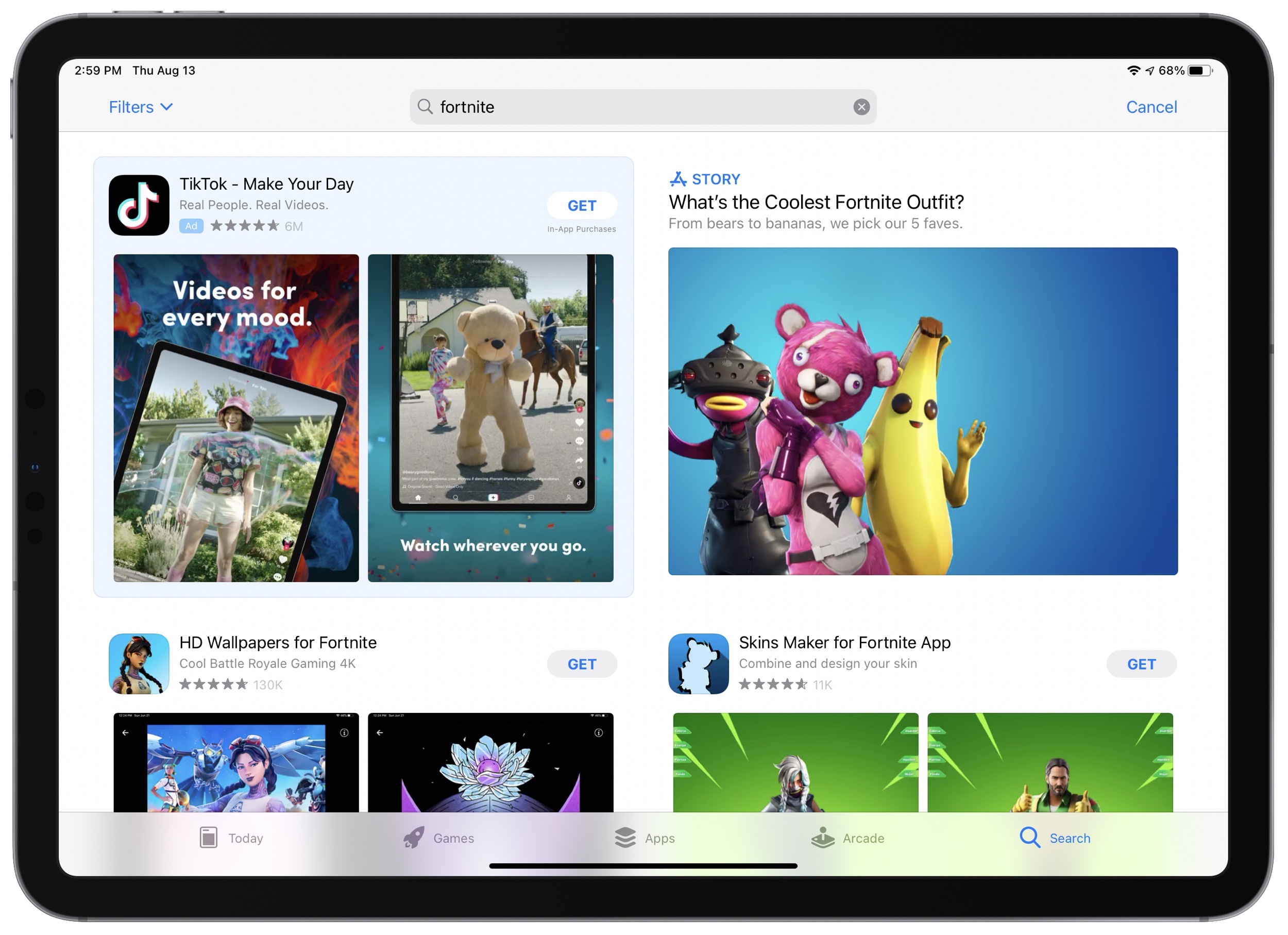 Fortnite is no longer available for download on the iPhone or the iPad, and Apple provided a statement to MacRumors on Fortnite's removal:

Today, Epic Games took the unfortunate step of violating the App Store guidelines that are applied equally to every developer and designed to keep the store safe for our users. As a result their Fortnite app has been removed from the store. Epic enabled a feature in its app which was not reviewed or approved by Apple, and they did so with the express intent of violating the App Store guidelines regarding in-app payments that apply to every developer who sells digital goods or services.

Epic has had apps on the App Store for a decade, and have benefited from the App Store ecosystem - including it's tools, testing, and distribution that Apple provides to all developers. Epic agreed to the App Store terms and guidelines freely and we're glad they've built such a successful business on the App Store. The fact that their business interests now lead them to push for a special arrangement does not change the fact that these guidelines create a level playing field for all developers and make the store safe for all users. We will make every effort to work with Epic to resolve these violations so they can return Fortnite to the App Store.
Click to expand...

This morning, Epic Games began letting players purchase 1,000 V-Bucks in the Fortnite app for $7.99, with the purchases going directly to Epic Games rather than using Apple's in-app purchase system.

At the time, it was not known if Epic Games had some kind of special permission from Apple to introduce such a feature as it is a clear violation of Apple's App Store rules surrounding in-app purchases. Given that the app has now been pulled from the App Store, it appears that Epic Games willingly violated Apple's requirements by offering the direct payment plan.

Rule 3.1.1 of Apple's App Store guidelines states that apps that offer in-game currencies need to use the in-app purchase mechanism. Apps are prohibited from including buttons, links, or other calls to action that ask customers to use non-Apple approved payment methods.

3.1.1 In-App Purchase:
- If you want to unlock features or functionality within your app, (by way of example: subscriptions, in-game currencies, game levels, access to premium content, or unlocking a full version), you must use in-app purchase. Apps may not use their own mechanisms to unlock content or functionality, such as license keys, augmented reality markers, QR codes, etc. Apps and their metadata may not include buttons, external links, or other calls to action that direct customers to purchasing mechanisms other than in-app purchase.
Click to expand...

Epic Games made the direct payment option available in the in the United States, Canada, Australia, France, Germany, Spain, the United Kingdom, and other countries, and said that because apps that offer real-life goods and services like Uber and StubHub are not required to use Apple's in-app purchase mechanism, Fortnite should be entitled to the same treatment. Epic Games has also called Apple and Google's 30 percent commission on in-app purchases "exorbitant."

In response to Apple's statement and the removal of Fortnite from the App Store, Epic Games announced a new Nineteen Eighty-Fortnite short premiering at 4:00 p.m. Eastern Time, which appears to be a riff on Apple's famous 1984 ad.


https://twitter.com/i/web/status/1293984290326433792
Epic Games' stand against Apple comes as Apple is facing a U.S. antitrust investigation over its App Store rules and policies and as Apple is recovering from another very public dispute over the "Hey" email app.

Update: Epic Games has filed a lawsuit against Apple for pulling Fortnite from the App Store. [PDF]

In the filing, Epic Games accuses Apple of being a "the behemoth seeking to control markets, block competition, and stifle innovation" and imposing "anti-competitive restraints" and using "monopolistic practices in markets" against App Store developers.

Apple imposes unreasonable and unlawful restraints to completely monopolize both markets and prevent software developers from reaching the over one billion users of its mobile devices (e.g., iPhone and iPad) unless they go through a single store controlled by Apple, the App Store, where Apple exacts an oppressive 30% tax on the sale of every app. Apple also requires software developers who wish to sell digital in-app content to those consumers to use a single payment processing option offered by Apple, In-App Purchase, which likewise carries a 30% tax.
Click to expand...

With the lawsuit, Epic Games says it is not aiming for a cash payout, but instead wants to secure "injunctive relief" in the iOS App distribution market and payment processing market for " hundreds of millions of consumers and tens of thousands, if not more, of third-party app developers."

Update 2: The Nineteen Eighty-Fortnite short is now available on the Fortnite YouTube channel, encouraging people to "join the fight to stop 2020 from becoming 1984." The ad is also available in Fortnite.


Epic Games has also created an FAQ explaining the lawsuit it has filed against Apple and why iPhone and iPad users can't access the Fortnite app.

Good. Fortnite doesn't provide third parties a way to sell within its game. Why should Apple allow them free real-estate for customers that Apple worked to build?

Damn, what a mistake, Epic. The amount of money they are losing right now has to be crazy.
Reactions: GSPice, sparkswillfly808, Jack Smith2737 and 37 others

Noooooo! Why would you do that Apple???

Come on... Phil Schiller save us please.

This is not GOOD!

Can I still play it if I have already downloaded it? What about updates?
Reactions: SigEp265 and compwiz1202

Fidget08 said:
Damn, what a mistake, Epic. The amount of money they are losing right now has to be crazy.
Click to expand...

I think it was a calculated move, Epic knew Fortnite would get pulled and is taking the short term money loss for what could be a PR win long term
Reactions: lolrepeatlol, jeabraham, macsforme and 76 others
W

Theyayarealivin said:
Noooooo! Why would you do that Apple???

Come on... Phil Schiller save us please.

I hope this is not why they moved Phil to be an Apple Fellow!
Reactions: Marlon DLTH :) and TheYayAreaLiving 🎗
M

Obviously they knew this would happen, I wonder why they've done it, perhaps to make a point as to how much Apple takes from each transaction? Like Steam.
Reactions: EyeTack, AccenT, DEXTERITY and 8 others
T

I'm sorry but that was just plain greedy of Epic. Made billions of dollars and now this? ?‍♂️
Reactions: lolrepeatlol, Lopov Jack, Jack Smith2737 and 37 others

Epic did this knowing full well they'd be pulled so they could play the victim.
Reactions: kucharsk, k1121j, ckseid and 59 others

"I just want enough to wet my beak a little. Otherwise, I consider it a sign of disrespect."

The percentage of Fortnite users on iOS is probably 5% Compared to PC/Consoles.
Reactions: nachodorito, decafjava, Fishcake21 and 14 others
N

I'm not sure that this will help Apple's current App Store lawsuits...
Reactions: MartyvH, macsforme, EyeTack and 18 others

Theyre jumping on the ‘challenge Apple’ bandwagon. They’re all seeing what they can get away with.
Reactions: Jack Smith2737, nachodorito, Mescagnus and 19 others

This is actually a really smart move on Epic's part. They know that Apple is under fire right now, so they pushed out this update to cause calamity. They've made so much money from Fortnite, including on other platforms, that it's worth it for them to take this short-term hit to increase long-term profits. This is about to get quite interesting.
Reactions: lolrepeatlol, StoneyG, MartyvH and 53 others

I dont play Fortnite but this feels like a MASSIVE move!

in a word: whoa

this is sure to piss off TONS of people
Reactions: EyeTack, AppleFan1998, Wildkraut and 10 others
M

theshoehorn said:
I'm sorry but that was just plain greedy of Epic. Made billions of dollars and now this? ?‍♂️
Click to expand...

Most companies are greedy then. I'd enjoy to know what you think of Steam.
Reactions: Shirasaki, AppleFan1998, iModFrenzy and 8 others

Epic knows what it’s doing... Baiting Apple during an antitrust investigation. Apple took the bait, and I’m sure it will catch the eye of lawmakers and investigators. Bravo!
Reactions: jeabraham, macsforme, G5isAlive and 53 others

Everybody. Unless it was too cumbersome to do.