Gross margin for the quarter was 38 percent compared to 39.9 percent in the year-ago quarter, with international sales accounting for 62 percent of revenue. Apple also declared an upcoming dividend payment of $0.57 per share, payable on November 10 to shareholders of record as of November 7. The company currently holds $237.6 billion in cash and marketable securities. 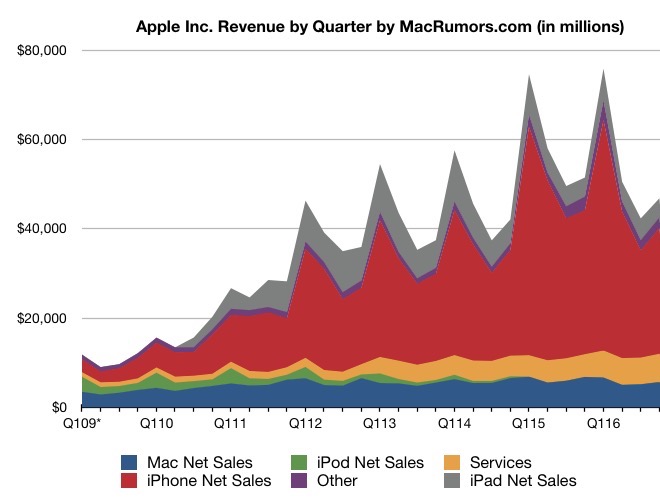 "Our strong September quarter results cap a very successful fiscal 2016 for Apple," said Tim Cook, Apple's CEO. "We're thrilled with the customer response to iPhone 7, iPhone 7 Plus and Apple Watch Series 2, as well as the incredible momentum of our Services business, where revenue grew 24 percent to set another all-time record."
Click to expand...

Apple's guidance for the first quarter of fiscal 2017 includes expected revenue of $76-78 billion and gross margin between 38 and 38.5 percent. 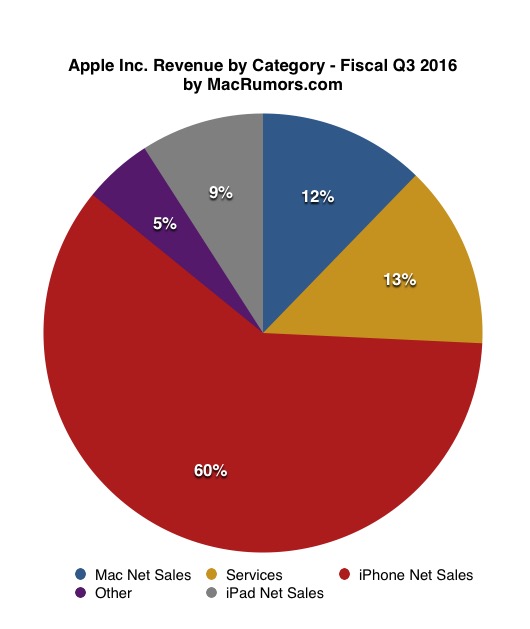 Apple will provide live streaming of its fiscal Q4 2016 financial results conference call at 2:00 PM Pacific, and MacRumors will update this story with coverage of the conference call highlights.

Conference Call and Q&A Highlights are available in reverse chronological order after the jump.

the first that post "apple is doomed" is going to hell
Reactions: HansumKingtut, TMRJIJ, enriquesh96 and 5 others

Pretty good considering they must've spent a fortune on a car to nowhere (for a while anyway).
Reactions: rGiskard, Huck, Gudi and 1 other person

Wish I had 237.6 billion in cash and marketable securities
Reactions: DeutscheMark, Avieshek, dr34mc4st3r and 15 others
S

If that is TL;DR - here's what you need to know

Apple still made a crapton of money. But after 15 years, they had their first full-year revenue decline.
Reactions: TechGeek76, rGiskard, dilbert99 and 12 others
X

Since 2001, for the first time, .. and people think it's the apocalypse

Nice job on making billions in profit Apple. Keep it up.. like, release an iMac and Mac Pro for example.
Reactions: Jim L, HArzeh, Avieshek and 6 others

Get ready for that Apple Spin boys !

We have a great interest in that!
Reactions: TechGeek76, t1meless1nf1n1t, pcmacgamer and 4 others

I wish my profits dropped to only 9 billion dollars
Reactions: t1meless1nf1n1t, Stpike2001, HArzeh and 12 others

Something not right with that first plot. X-axis labels are whack, including two Q316...
Reactions: Johnny907 and linkmaster02
R

I'm sure no one is high fiving around apple headquarters.
Reactions: godrifle, HArzeh, Benjamin Frost and 2 others

and macrumor fans were saying that the iphone 7 was a new phone. Clearly the public disagrees.
Reactions: dilbert99, MH01, Johnny907 and 1 other person
A

That's a massive drop in iPhone sales. Especially for a major iPhone update as opposed to an 'S' upgrade.

Over a 5% drop, ouch.
Reactions: HArzeh, Benjamin Frost, zemsantos and 1 other person
J

What about Apple Watch sales, which are somewhere in the "other" category, and according to another article, down 40% since last year.
Reactions: Azmodan79, Dopestar, HArzeh and 1 other person
K

And the stock is down. I guess they didn't beat expectations by as much as expected.
Reactions: Johnny907
L

Still got fat margins, what else matters?
S

Aussi3 said:
Wish I had 237.6 billion in cash and marketable securities
Click to expand...

You mean 237 billion in cash that you can't really do anything with in the US? Yeah, me too...
Reactions: TechGeek76, zemsantos and jedifaka

polymersayb said:
Something not right with that first plot. X-axis labels are whack, including two Q316...
Click to expand...

It's new. Thinner and lighter.

It's better than expectation with old products. No new Mac mini, no new Mac pros, no new iPad Air, no new iPad mini, no new iPod, no new Apple TV, no new Apple TV services, no new features on Apple watch, no new iMacs... What all Apple employees have done for a year is building the spaceship, expanding showrooms, and making new watch bands.
Last edited: Oct 25, 2016
Reactions: macguru212, Stpike2001, godrifle and 9 others
K

andy9l said:
That's a massive drop in iPhone sales. Especially for a major iPhone update as opposed to an 'S' upgrade.

Only 2 weeks of iPhone 7 sales are included. It was actually about 500,000 units more than analysts were expecting.
Reactions: aliensporebomb, DocMultimedia, fastasleep and 5 others

This was a more normal year after some exceptional years. The financials are not something to worry about at this stage.
Reactions: keysofanxiety