Apple in iOS 15 introduced a new Safari experience that moves the URL bar and tab interface to the bottom of the iPhone, a decision that has been controversial with iPhone users. 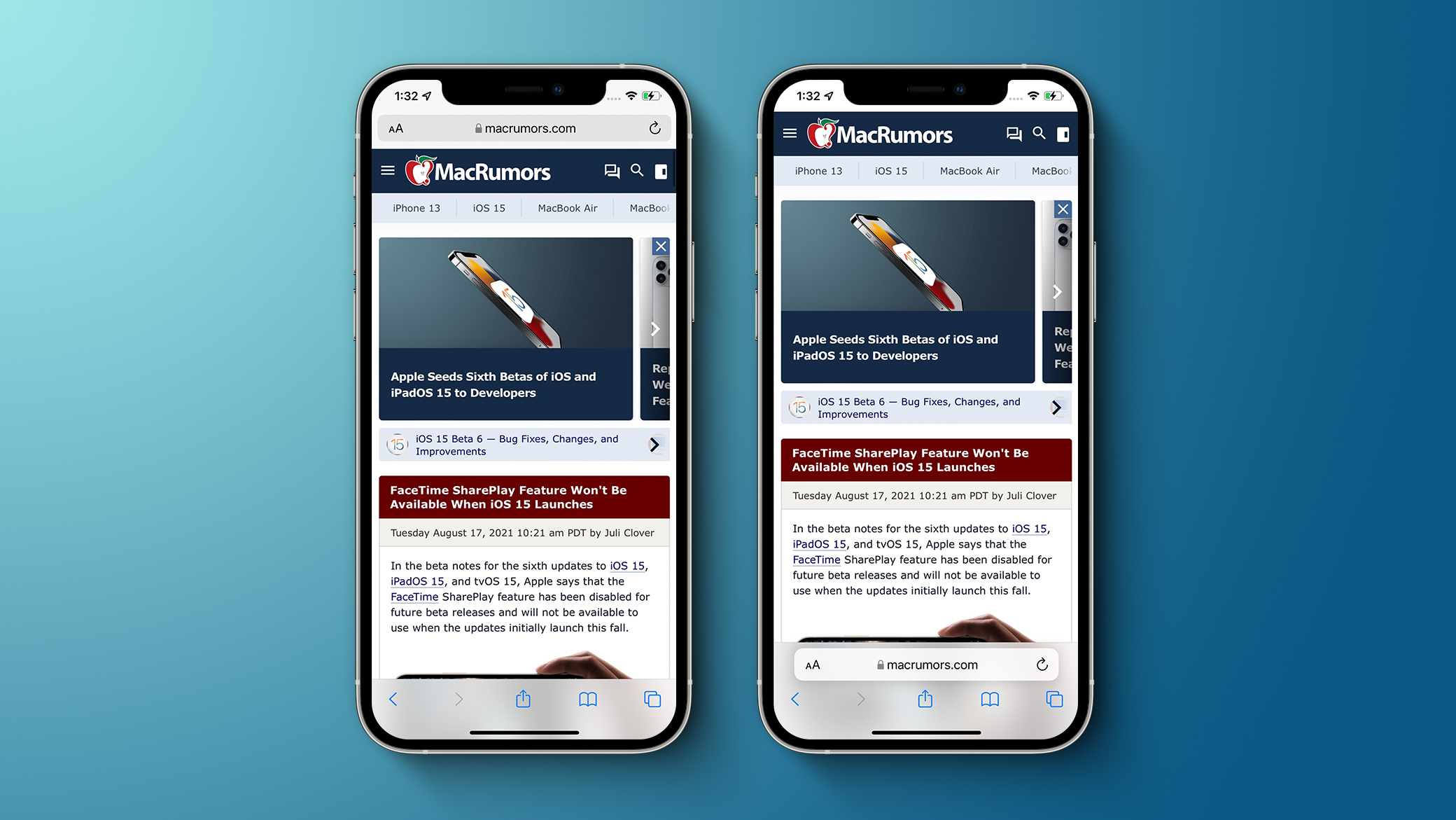 Safari options in iOS 15 beta 6​
Throughout the beta testing period, Apple has been tweaking the design of the Safari browser on the iPhone and in beta 6, there are further refinements. The bottom tab bar has been redesigned to appear below page content, and Apple has also added a toggle to show the address bar at the top of the iPhone rather than the bottom.

The original design in iOS 15 beta 5​
The addition of a toggle to show the address bar at the top of the Safari interface returns Safari to a more iOS 14-like experience, walking back many of the iOS 15 changes.

With the bottom view option toggled on, Safari offers a dedicated toolbar with buttons at the bottom of the interface, which is also an improvement over the prior floating design.

Apple has also introduced new setting options to remove the website tinting and to enable a Tab Bar while in landscape mode. There was previously a "Show Color in Tab Bar" accessibility setting, which appears to be the same as the new "Allow Website Tinting" toggle.

Apple previously added similar toggles in iPadOS 15 and macOS Monterey to offer either a separate tab bar (which was the original default when the betas launched) or a merged tab bar, which is more similar to the previous design.

Thank You! You are starting to listen!
Reactions: IcyTexx, DeepIn2U, dazzlingirl and 23 others
M

Would you consider this AddressBarGate? Just kidding.

Oh dang, that might be the best possible outcome. They just fixed a lot of issues with that new design of the bottom UI, plus made it optional.
Reactions: IcyTexx, chemenski, BulkSlash and 22 others
J

Wow, shocker. Easy solution: give the user the choice. Who woulda thunk it!

its nice to have options, but if they make bottom default, and have a toggle to change it in settings, almost every iOS user is just going to use it at the bottom.
Reactions: Premium1 and Ethanmenzel

It took me a while to reprogram 11 years of muscle memory... but now I actually prefer the bottom address bar.
Last edited: Aug 17, 2021
Reactions: royas, Gian-Pa, DeepIn2U and 43 others

I’m so glad. It drove me nuts. Click it and it moves away. So frustrating.
Reactions: macsound1, Huck, childu and 7 others
M

Now they just need to get rid of the Touch Bar. ??
Reactions: Kram Sacul, DougieS, BenjipNZ and 10 others

Interesting...rather than saying "You're looking at it wrong" and forcing the change on everybody, Apple is giving users a choice. I wonder if this is because Sir Jony is (finally) gone.
Reactions: gank41 and zv470
N

So glad it’s back at the top! It was the first thing I changed with Beta 6!
Reactions: Huck

Yeah this seems like the best compromise in the end, love to see it
Reactions: LeadingHeat and MacDevil7334
E

My 90yo father will appreciate it. Thanks Apple for making my life easier!
Reactions: Kram Sacul, macsound1, Huck and 1 other person
J

zv470 said:
It took my a while to reprogram 11 years of muscle memory... but now I actually prefer the bottom address bar.
Click to expand...

I'm indifferent. On a computer, it is still at the top so that instinct to go to the top is still there. I mean how many times do you tch the top bar vs the buttons at the bottom really. Or browsing with one hand on the phone regularly (yes, giggity).

At the bottom makes some screwy issues with swiping between apps because the home bar is down there. And it made some website touch targets not work with that floating bar.
L

personally, it doesn’t matter to me either way because I like both.
My only frustration has been that the “request desktop” button is way more hidden than it used to be.
I do find it interesting that Google tried to do a very similar change to chrome internally, and it also got reversed quite quickly. Apple introduced a sweeping overhaul to its Safari browser's interface on iOS 15, iPadOS 15, and macOS Monterey, with a redesign that includes an...

www.macrumors.com
This right here is exactly why I don’t think we will ever see another iOS 7 style complete redesign, no matter how many people think that they want it.
The iPhone/iPad user interface is just too big and too familiar that any slight changes, even to a single app like Safari, or a couple years ago when they completely redesigned reminders, breaks too much compatibility and consistency and just frustrates the majority of customers
Reactions: macsound1

They returned the bookmarks button to the lower right? Hope so.
Last edited: Aug 17, 2021
Reactions: tbayrgs and gank41

I would like it to be on the top, but having gestures to switch between neighboring tabs is also great. I wonder if they can find a way to implement that without making the bottom of web pages virtually un-touchable, or just keep the address bar on top.

Additionally: Would be great to see an iOS Technology Preview of Safari, too!
Last edited: Aug 17, 2021