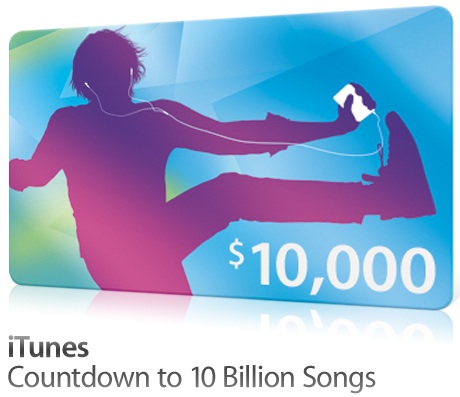 Apple today unveiled a "Countdown to 10 Billion Songs" promotion via the iTunes Store, offering the contest winner a prize of a $10,000 iTunes gift card. A counter on the main iTunes Store page currently displays in excess of 9.8 billion downloads.

According to the official contest rules, participants may make up to 25 entries per day either by purchasing/downloading songs from the iTunes Store or by filling out an entry form on Apple's web site. The contest begins today and ends once the 10-billion-song milestone is reached.

The prize will be awarded for the entry (either through a song download or through the non-purchase online entry) sent immediately following the download of the 9,999,999,999th song. The potential winner will be determined by the order of the entries received. In the event that more than one entrant would be a winner based on the simultaneous timing of entries, one entrant will be randomly selected from those entrants as the winner. Each entrants chances of winning are dependent upon the number of eligible entries received.
Click to expand...

Apple has periodically offered similar contests in the past, such as its One Billion Song contest in 2006 and a One Billion App contest last year.

alphaod said:
I wonder what the resell market for a $10,000 iTunes gift card is.
Click to expand...

Based on eBay prices it would be $10,020 with free shipping!

How is it a lame prize? Apple doesn't have to give anyone ANYTHING! It's a fun way to publicize the fact that the iTunes store is wildly successful.

Eraserhead said:
Less than $10000, to be honest for 10 billion songs this is a pretty lame prize.
Click to expand...

they're not picking one out of ten billion entries; it's the person with the ten billionth download who wins.

siurpeeman said:
they're not picking one out of ten billion entries; it's the person with the ten billionth download who wins.
Click to expand...

Do I have to do that silhouette's funny walk if I win?

I was wondering when Apple would fix the countdown clock. I noticed a couple of hours ago when it first went up it said 2.6 billion. Anyone else see it?

given that it's 9.8 billion people currently, you have a 1 in 200,000,000 chance of winning. That's still comparable to most lotteries. i'd rather go with the lottery.

I wouldn't mind winning that.

DoNoHarm said:
given that it's 9.8 billion people currently, you have a 1 in 200,000,000 chance of winning. That's still comparable to most lotteries. i'd rather go with the lottery.
Click to expand...

Your odds of winning would get progressively better. Say it's at 9,999,999,999 then your chances of winning are 1/1. There better than any lottery I know. That's is if I understand how the comp works. And it's not 100% statistically correct, there are many other factors to take into account.

jamesryanbell said:
I wouldn't mind winning that.
Click to expand...

"the winner is solely responsible for all applicable taxes, fees and surcharges associated with prize receipt and/or use"

Not sure I would want to pay the taxes for this "prize".
B

I don't want $10,000 worth of iTunes music. I haven't even spent the $15 gift card I got last year because Apple Canada won't let me use it to buy apps.

I hope the winner is someone who actually appreciates the prize.

TagMac said:
"the winner is solely responsible for all applicable taxes, fees and surcharges associated with prize receipt and/or use"

Not sure I would want to pay the taxes for this "prize".
Click to expand...

Ouch. That would burn. Isn't gift tax somewhere around 50% for these sorts of things? I don't have an extra $5,000 lying around. But then again I could eBay it and probably get more for it if it's a real $10,000 card. Collector's item.

8th news story of the day. Crazy! Yet none of them seems terribly important. Meh.

Grimace said:
How is it a lame prize? Apple doesn't have to give anyone ANYTHING! It's a fun way to publicize the fact that the iTunes store is wildly successful.
Click to expand...


TheOrioles33 said:
You would think they would include a MacBook Pro and an iPad or something. Didnt they give a MacBook Pro out as well last time?
Click to expand...

Exactly, giving away something real feels a bit more generous.

...Canada (excluding the Province of Quebec)
Click to expand...

As usual... No thanks to Loto-Québec.

I'm buying 20 albums a day until they reach the 10bnth download. Then, when I win, I'm going to share with everyone here!

Im sure I could find a song to download.

you made me laugh

But seriously who in the world would need $10,000 on iTunes?!! That's ridiculous! Unless there is any truth to the rumor I heard a while back about possibly being able to use your itunes account for online purchasing similar to paypal...

Or at least let you purchase from the apple store. Is that even possible? I know if I won this I would definitely buy an ipad, macbook pro, imac, and more. that would be awesome!

100 million said:
On July 1, 2004, Apple announced that, starting with the sale of the 95 millionth song, an iPod would be given away to the buyer of each 100 thousandth song, for a total of 50 iPods. The buyer of the 100 millionth song would receive a PowerBook, iPod, and US$10,000 gift certificate to the iTunes Music Store.
Click to expand...


1 billion said:
On February 7, 2006, Apple announced that they were counting down to the billionth song download and began a promotion similar to the previous 100 million and 500 million countdown. Whoever downloaded the billionth song would receive a 20" iMac, ten 60 GB iPods, and a US$10,000 iTunes Music Card. The billionth song was purchased on February 23, 2006 by Alex Ostrovsky of West Bloomfield, Michigan. The purchased song was "Speed of Sound" as part of Coldplay's X&Y album.
Click to expand...

So they were much more generous before.