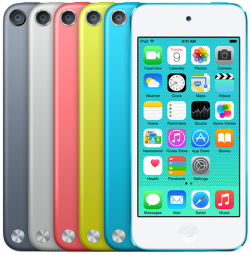 Apple is expected to announce a new iPod touch later this year, according to AppleInsider. The report, citing a source familiar with the plans, claims that the refreshed portable media player will likely have a similar design as the current model released over two-and-a-half years ago, and speculates that the next-generation device could have camera and processor improvements.

Apple has not refreshed the iPod touch since October 2012, when the portable media player was updated with an ultra-thin and colorful design, A5 processor and Lightning connector. iPod sales have been declining for several years, becoming a largely insignificant part of Apple's product lineup, anchored by the iPhone, iPad and Mac. The company no longer discloses iPod sales in its quarterly results after reporting 2.9 million units sold in Q4 2014.

The report is entirely speculative about possible new features the next-generation iPod touch could have, including a 64-bit A7 processor, increased storage space, and improved iSight and FaceTime cameras. Additionally, it would make sense for the new iPod touch to support Apple Pay, which would require locked down NFC capabilities and a Touch ID fingerprint scanner. Beats-related features could also be in store following Apple's $3 billion acquisition of the company in May 2014.

If the report proves accurate, Apple could announce its next-generation iPod touch during its iPhone event in September or iPad event in October that it typically holds each year. It is also possible that Apple may quietly update the iPod touch through a press release or website update, given that iPods are no longer as significant for Apple.

I wouldn't be surprised to see a new Nano with Wi-Fi and Apple's new streaming service built in.

Also, give the iPod touch a memory boost, so people who are mourning the classic can have a reason to live.

been waiting for a 128GB one - really love the form factor on these, just needs a bit more welly under the hood and I'm sold.

Just get an iPhone.
Reactions: yochanan77
U

If they make a 6+ version, it'll be an iPad micro. If they made a 512gb one, I'd get one to replace my two upgraded classics.
S

Hopefully this is true, was a little afraid they were just going to let it die...

I'm surprised people still buy the iPod Touch. I figure everyone who would want one has an iPhone at this point.

I remember the happy days when the iPod touch would be updated every year and was effectively an iPhone without the phone.
Reactions: rafark and vanzantapple

Makes sense to update it if they don't plan to discontinue it yet.

After all, the current model has an A5 chip (same as the iPhone 4s) which is also the last chip to be supported by iOS 8.

It's necessary to move to something better for the iPod touch to have iOS 9 and 10.

Naw... I just don't think there is enough of a need for it.
C

I wonder whether the iPod Touch will stay at 4" or move to 4.7"? Probably 4.7" in order to standardize with the latest iPhones. It'll also be easier to support the A7 in a 4.7" form factor since the thinner form factors of iPod Touches compared to iPhones means a 4" iPod Touch can't fit as big a battery as the iPhone 5s and battery life would be compromised. Moving to a 4.7" form factor can compensate for that.
Last edited: Apr 23, 2015
H

Well the iPod touch is basically a small iPad right? Why not call it 'iPad Nano', and get rid of the iPod brand entirely... ? Its time...
The Watch will replace the shuffle in many ways... So that's also solved...

Not sure where the market is for this?

For kids that don't need a phone, it is cheaper to get use a hand me down iPhone like an iTouch.

Yellowbean12 said:
I remember the happy days when the iPod touch would be updated every year and was effectively an iPhone without the phone.
Click to expand...

While the iPod touch was updated more often before, it always lacked some of the iPhone's feature other than the cellular chip.


If Apple really wanted the iPod touch to be an iPhone without the phone, they could have made it that, but it's always been positioned as a much cheaper device that isn't quite as good, probably to not cannibalize the iPhone too much considering it has much higher margins.
A

What about a bigger screen?

If its the same screen-size as the last one, what's the point in even bringing it?
S

I'll be anxiously waiting to buy this.

nazaar said:
Just get an iPhone.
Click to expand...

many parents are willing to give their kids an iPod Touch but not willing to pay for an iPhone for them (and that is a good thing)
Last edited: Apr 23, 2015
Reactions: vanzantapple
D

Seeing as market for iPods are just portable media devices, a lot of fitness and kid users, I don't see the benefit of Apple Pay on it. A 64 bit processor is just unnecessary for a device of that nature. I was kinda hoping they would kill off the iTouch as an unnecessary product. Most people can buy an iPhone refurb or a cheap Android phone to use as a MP3 player as a standalone. My 16 GB iPhone 5C cost less than a 32 GB iPod Touch, but with more functionality.
J

PhaserFuzz said:
I'm surprised people still buy the iPod Touch. I figure everyone who would want one has an iPhone at this point.
Click to expand...

An iPod Touch is a decent portable media player, internet, and gaming device that has access to (most of) the same apps as an iPhone, for a fraction of a price and no mobile service plan to worry about. I don't see why it's surprising that people might still be interested in it. Think teenagers, for example, who can't afford or their parents simply don't want to get them a smartphone.
Reactions: rafark and vanzantapple
You must log in or register to reply here.
Share:
Facebook Twitter Reddit Email Share Link
Register on MacRumors! This sidebar will go away, and you'll see fewer ads.
Sign Up
Top Bottom