Apple has seeded developers with a new build of OS X Mountain Lion (12C50) to developers this evening. The version contains complete release notes as posted by 9to5Mac, suggesting the release is near complete. Apple is holding a media even on Wednesday where they are likely to detail the new iPhone and iOS 6.

Other new features
- Power Nap support for MacBook Air (Late 2010)
- iMessages sent to your phone number now appear in Messages on your Mac
- From Safari and Mail on your Mac you can add passes to Passbook on your iPhone or iPod touch running iOS 6
- New shared Reminders lists
- FaceTime now receives calls sent to your phone number
- New sort options allow you to sort notes by title, the date you edited them, and when you created them
- Dictation now supports Mandarin, Cantonese, Spanish, Korean, Canadian English, Canadian French, and Italian
- The Dictionary application now includes a French definition dictionary
- Sina Weibo profile photos can now be added to Contacts

The 10.8.2 update also includes general operating system fixes that improve the stability, compatibility and security of your Mac, including the following fixes:

- An option to discard the changes in the original document when choosing Save As
- Unsent drafts are opened automatically when launching Mail
- Receive Twitter notifications for mentions and replies from anyone
- URLs are shortened when sending tweets from Notification Center
- Notifications are disabled when AirPlay Mirroring is being used
- SSL support for Google searches from the Smart Search Field in Safari
- New preference to have Safari launch with previously open webpages
Click to expand... 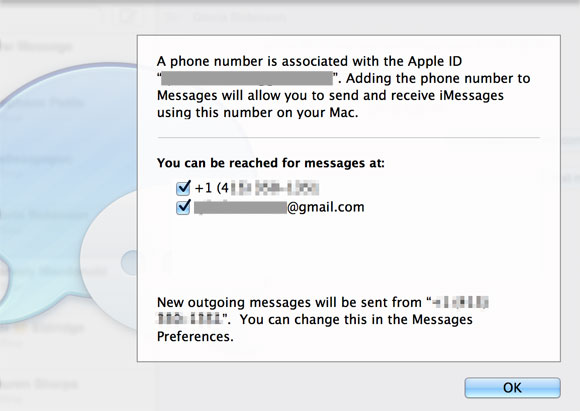 One notable feature is the unification of the Apple ID and phone number in OS X Messages. As described by TheVerge:

Now, if someone calls your phone number for Facetime, you'll be able to answer on your Mac or iPad. The same goes for Messages -- if you get an iMessage on your phone, it'll be delivered to your Mac and other iOS devices, even if the sender sent the message to your cell phone number and not your Apple ID email.
Click to expand...

so excited. Tomorrow is going to be amazing.

That is quite a list of updates! Can't wait until 10 AM!

It would also be amazing if they fixed the shut-down of iCloud email affecting 1.1% of iCloud users leaving them stranded without ANY access to email for a day now......

Downloading as we speak.

safari should be much snappier now

Mmmmmmm osx doesn't have anything to do with iPhones or iOS so....could this be related to an iMac tomorrow I know it's not going to happen but one can only hope

MacRumors said:
- iMessages sent to your phone number now appear in Messages on your Mac
Click to expand...

How was this not included until this point?

I'm struggling to understand how Apple thought that giving people 'Messages' on the Mac that didn't do this from the start was a good idea.
D

edry.hilario said:
Mmmmmmm osx doesn't have anything to do with iPhones or iOS so....could this be related to an iMac tomorrow I know it's not going to happen but one can only hope
Click to expand...

It has to do with iOS 6 completely.

So tired of people facetiming my phone number instead of my email when I'm on my Mac. Legooooo
K

Small White Car said:
How was this not included until this point?

I'm struggling to understand how Apple thought that giving people 'Messages' on the Mac that didn't do this from the start was a good idea.
Click to expand...

Exactly! It has been TORTURE using iMessage and having two different conversations on your iPhone because one is with the email and the other with your telephone number. FINALLY!
8

Now the question is, should I associate my phone number with the Apple ID I use to make purchase through iTunes, or with the Apple ID that I use for iCloud?? I imagine there are a lot of people in my situation who had an apple ID for purchases and then jumped onto MobileMe, not being allowed to merge the adresses! Leave it to apple to make things even more complicated.

Yeah I've been waiting for email/number merging! Gonna make life so much easier and make messages actually usable! And yes it totes has to do with IOS6
F

just curious how it will work, don't want to miss texts.

while they are at it, perhaps they can finally fix the wifi slow downs on my 2010 iMac ?
J

just curious how it will work, don't want to miss texts.
Click to expand...

Yup, it should go to all of them.
F

JangoFett124 said:
Yup, it should go to all of them.
Click to expand...

Thanks, I have turned off imessage on my phone, but on for my ipad so I could make sure I got imessages on my ipad with certain people, now that I can make sure if I am flying with my iPad, doing work with my macbook, or texting, i'll have them go to every device....this will be worth testing because I did not want to lose texts and miss out on business opportunities or anger the gf...lol
S

Does anyone know if this fixes the long standing issue with Colorsync not affecting Finder or Dock icons in 10.8?

Might be hard to tell if you're not on a wide gamut monitor. You might be able to notice a slight difference if you select a colourful icon in Finder (ie, Photobooth or Coda or something) then press the space bar for Quicklook... If the two icons look identical (the one in the Finder, and the one in Quicklook)- then I guess they've fixed the issue.

I love the message and facetime options for the Mac, but I don't know how to use this affectively when you have multiple users on the same computer. For our iMac, I wouldn't want my wife to see all my messages when she goes to use the internet or pay bills and vice versa. It seems like these features are really meant for those who have their own laptop versus a shared family computer. Am I understanding that correctly?

I am not sure if I am loving the idea of getting all my messages on my mac through imessage. Now people can read and snoop on my messages. I don't want to lock my screen etc.
Last edited: Sep 11, 2012

Looks like apples is going to make sure that Tomorrow will be an unforgettable day...
I

Gamecenter will now be in full affect!!!

Small White Car said:
How was this not included until this point?

I'm struggling to understand how Apple thought that giving people 'Messages' on the Mac that didn't do this from the start was a good idea.
Click to expand...

who cares? It's awesome that we're getting it now.